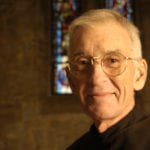 Today we celebrate the feast of St. Michael and All Angels, one of the great solemnities of the Christian liturgical calendar, and in doing so we focus our attention on the role of angels in the development of Judeo-Christian history. But it is also an opportunity for us to consider angels and their importance in our own personal spirituality. Is there room for them in your Christian faith, and if so, what part do they play? You may understand their significance in the unfolding of the Christian story in its early beginnings, but do they mean much to you currently? After all, we are living in the 21st century CE. Aren’t they really similar to fairy tale characters—figures of fantasy? As such, are they the weak link in your Christian faith? Do they really exist? I must say I have had my doubts and still do. While it is a comforting thought to many, do we really have guardian angels, special celestial beings whose purpose is to watch over us and keep us from harm. I suspect something mysterious is at work when I enter a crowded parking lot and the best place opens for me or when I am spared a terrible accident averted in the nick of time. Could this be the work of an angel?

You may be surprised to learn that many people believe in angels, even men and women who say they are not religious. A study in the UK in 2002 based on interviews with 350 persons found many who claimed to have experienced the presence of angels. These took the form of auditions declaring a warning or a sense of being touched, pushed or lifted to avert a dangerous situation. Others reported the smelling a pleasant fragrance at the time of the death of a loved one as if from the Garden of the Resurrrection. For some of those with these experiences, angels appeared in tradition form with wings; for others they were radiant human beings or figures of light. A study by Baylor University in 2008 indicated that 55 percent of Americans surveyed believed in angels, while a similar poll by the Pew Trust placed the number of believers at 68 percent. This tallied with the results of a recent survey in Canada.

Since they are a presence in the lives of many living today, who are these angels? What part have they played in religious history? First of all, their presence has not been limited to the Judeo-Christian experience. Angels figure in most of the major world religions. Our English term angel is derived from the Koine Greek term angelo meaning messenger. Their major purpose is to serve as God’s messengers. In fulfilling their mission they move with great speed. Icons of Michael and Gabriel indicate their rapid arrival by the strings of their headbands aloft in the breeze. The Jewish Bible and the Christian New Testament are replete with stories involving angels. In the book of Genesis after Adam and Eve are cast out of the Garden of Eden cherubim guard the Tree of Life, and in the vision in today’s lesson from the book of Revelation Michael and his angels triumph over the forces of evil. Angels appear in the guise of three mysterious strangers who visit Abram and Sarai and receive their hospitality at the oaks of Mamre. At a major turning point in his life Jacob wrestles with an angel. These celestial creatures appear in the Psalms as both destructive forces and guardians who bear us in their hands. In the book of Daniel one appears in the fiery furnace and some are given names. Angels bring divine announcements to Zechariah and Mary and angels visit Joseph in dreams. They exult at Jesus’ birth and after his death some of our Lord’s friends encounter angels at his tomb. The author of the Letter to the Hebrews urges us to offer hospitality to strangers for in doing so we may be entertaining angels unaware. And these are only some of their more significant scriptural appearances.

Of the archangels Michael is the warrior of truth and the weigher of souls, Gabriel is God’s chief messenger, and Raphael is the healer. In addition, there are various ranks of angels. Most remain in heaven to praise God. Some are sent in place of God, while others are God in angelic form. As with the rest of creation God created angels. Humans rank a little lower than them. In the Judeo-Christian tradition they are without gender, neither male nor female. It is not clear whether angels have free will as humans do, but Satan and other angels, in disobeying God have fallen from heaven and are the forces of evil in the world, continually at war with God’s armies of light. There is no scriptural indication that humans at death become angels, although this is a common misconception. In contemporary western culture the term angel is often used loosely and broadly to indicate human caregivers and those who do good.

What then if I were to say after all this that angels are mere make believe, an explanation of God’s loving actions? After all, there is no tangible evidence that they exist—no one has ever produced an authentic feather from an angel’s wing. Angels are figments of the imagination. And yet to say so is not to denigrate their spiritual value or undermine their importance. We need a feast to celebrate the imagination because our imagination is one of the spiritual gifts that brings us into deeper relationship with God. St. Paul may have omitted it from his list of spiritual gifts, because it is a power we share in common, inherent in all of us.

Ignatius of Loyola, the founder of the Society of Jesus, recognized the importance of the imagination as a means for deepening our intimacy with God and our self-understanding. In his Spiritual Exercises, the retreat format he created that has enriched the spiritual faith of millions over the last 500 years, he instructed those on retreat to imagine themselves in conversation with Jesus by placing themselves in an episode of the Gospel and letting the power of that encounter open their hearts and guide their lives. When we imagine in this way we initiate a process that allows the spirit to draw us closer to Jesus. Meditation on scripture utilizes our imagination to help us understand and grow. It is the power that helps us recognize God’s invitations in the daily chances and changes of our lives. We see this in the momentous meeting of Jesus and Nathaniel. In his imagination, Nathaniel recognizes Jesus as son of God, and Jesus assures him he will see greater things, angels ascending and descending on the son of man. We, too, come to know Jesus through our imagination.

And so this day we remember Michael and all angels and we celebrate the gift of the imagination. Through our imagination we have a pathway to eternal life and a means of understanding the promptings of our heart in our relationship with the divine. But do angels exist? How, for instance, can we explain the mysterious and often disturbing spiritual intrusions in our lives, are they the work of angels? I am sure some of you here this evening have had such experiences. Do angels exist? I will let you provide the answer.