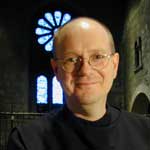 One Christmas, rather than giving individual presents to members of my family, my aunt gave my family a number of posters to hang in our basement room. That fall we had built a very 1960’s “rec room” where my siblings and I could invite our friends and not have to worry about either noise or mess and my parents could then reclaim the living room as their space. So my aunt decided to help us decorate the space and hence the posters that Christmas as her gift to all of us.

There were several posters, but the one I remember best was of Michelangelo’s statue of Moses. And I remember it, not because even then I was a budding theologian, but because I found it so curious. Created in the early years of the Sixteenth Century, Michelangelo’s Moses was regarded by the artist himself as his most lifelike creation. Once finished he is reputed to have struck the statue on the knee with his hammer and exclaimed “Now, speak!” To this day you can still see a chip in the marble on Moses’ knee where Michelangelo’s hammer is said to have hit.

It was his horns that captured my attention and held my imagination, and continue to do so to this day. Moses has horns! What’s that all about?

One of the most important teachings of our Founder, Father Benson is that he reminds us that every encounter with God changes us. He says this in his meditation on the Wise Men after their encounter with Christ at Bethlehem. He says of them:

None can come to Christ at Bethlehem and go away as they came….Our coming to Christ changes everything, and therefore even to the old scenes we return with changed hearts and new powers….It is indeed a greater thing to return to the old world by a new and heavenly life, and to live therefore, in the world as those who have been with Jesus, than it is to enter upon new spheres of life but with an old heart. That would be to set about new things in the old way. The necessary thing for us is to set about old things in a new way.[1]

For us as Christians that encounter with God in Christ began long ago. It began, not at our baptism, or even at our birth. That encounter began not at the first Christmas or even the beginning of time, but in the eons before time. Our very first encounter with God began the moment God conceived of us and in that moment long, long, long ago, before the sun and moon and earth were born, we began to change.

Michelangelo based his statue of Moses on St. Jerome’s translation of Exodus which tells us that when Moses came down from the mountain, rays of light radiated from his face, well, … like horns!

Like us, Moses’ encounter with God before time and in time changed him so that when he came down from the mountain, having entered the cloud of God’s glory and spoken with God as one speaks to a friend[3] his face shone with the radiance of God’s glory.

It is this same glory we see radiating from the face of Jesus on another mountain, in another place for there “he was transfigured before them, and his face shone like the sun, and his clothes became dazzling white”[4] and a voice was heard saying, “This is my Son, the Beloved; with him I am well pleased; listen to him.”[5] And there in that brief shining moment, we see Jesus as he truly is, and always had been, as the Beloved Son of God. In the same way, the Israelites came to see Moses as he truly was and always had been, not just as the one who lead them out of Egypt, but in all his glory, as the beloved friend of God.

In those moments when God’s glory shines in the face of another, we see them as they truly are and always have been, with unveiled faces, the beloved of God being changed from one degree of glory to another.[6] And the same is true for us. The same is true for us. For the transfiguration is not an idea. It is not a story. It is not a fable. It is a lived reality. And our faces shine too! They shine with the glory of God because like Moses, we too truly are and always have been the friends of God. Like Jesus, we too truly are and always have been, the beloved of God. And when we know this, and perhaps especially when we don’t, light radiates from our faces, well, like horns! Like horns! And we are shown to be God’s friends, God’s beloved, God’s daughters and sons with whom God is well pleased. And like the Magi we live as those who have been with Jesus and so we are changed.

We may not grow horns, as St. Jerome imagined of Moses, but we do shine, and that, Father Benson reminds us, changes everything.

None can come to Christ…and go away as they came….Our coming to Christ changes everything.

And that includes you. So Go home and look in the mirror? You might be surprised to see how much you really do shine. And that’s because you are God’s friend, God’s beloved, God’s daughter, God’s son and even now you are being changed from one degree of glory to another.