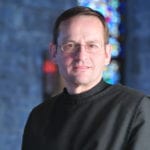 For most of my life, growing up in England, the first item on the news every evening was Northern Ireland.  The Troubles.  Every day, of every month, of every year, more atrocities, and a terrible sense of hopelessness.  In the first year of the 1980s after I had been ordained, I spent a succession of summers in Belfast, meeting with youngsters from both the Loyalist and Republican sides, and helping organize joint summer camps for them.  There were moments of grace, but more often a deep sense of hopelessness, as the youngsters slowly imbibed their own side’s version of history, attitudes hardened and reconciliation seemed further away than ever.

Yet, by the grace of God and through sacrificial and patient work of so many, 1998 saw the Good Friday agreement and 2006 the power sharing government in Belfast.  And most amazingly, this week saw the visit of the Queen to the Irish Republic.  There were so many moving moments in that visit, none more so perhaps than when the Queen bowed her head at the memorial in Dublin’s Parnell Square to Irish patriots who died in the long struggle for freedom, a bow which the Financial Times described as “a simple but transcendent gesture designed to heal the wounds of more than seven centuries of English colonial rule.”

And then later in her speech at Dublin Castle, the Queen said these words: “It is impossible to ignore the weight of history.  We should be able to bow to the past, but not be bound by it.”

During these weeks of Eastertide, this series of sermons is entitled “Towards Larger Life.”  I believe that one of the most wonderful ways in which the resurrection of Jesus opens us to larger life, is by freeing us from bondage to our history.  Throughout Jesus’ ministry he encountered men and women who were bound by their past.  Tax collectors who had cheated and lied, adulterers, sinners, those afflicted by illnesses which made them unclean and untouchable.  It was to these people that Jesus was drawn to offer them forgiveness, healing, acceptance and love, to proclaim release to the captives.  And so many were captive to their past, forever defined by the mistakes of their past.  Jesus offered them redemption and a new future, not determined by their past.  He acknowledged their past, but would not let them be bound by it.

And after the resurrection, Jesus offered the same forgiveness and offer of new life to his disciples.  They had fallen asleep in the garden; Judas had betrayed him; Peter had denied him three times.  All of them, in their own way, had abandoned him to that lonely death on the cross.  It was impossible for the disciples to ignore the weight of history: their shame and sorrow was quite apparent.  And yet Jesus would not let them be defined by their past, he would not allow them to be bound by their history.  Jesus rather loved them and forgave them and offered them a new and larger life.

“Simon, Son of John, do you love me?”  “Yes, you know that I love you.”  “Feed my sheep.” (Jn 21) Three times Peter had denied him, and three times Jesus forgives and restores him.  Jesus bows to his history, but then unbinds him from it, and sets him free for that long journey which was to make him into the great leader and pastor of the Church.

I believe the Risen Lord is inviting each one of us to make the same journey into larger life.  Each one of us has something in our history which binds us, which weighs us down.  Perhaps some wound which we received as a child, or some besetting sin or compulsion, something perhaps we have done in our past and of which we are deeply ashamed.  Some mistakes we have made in the past can sometimes dominate our lives.  They can hobble us, and take away our sense of self-worth.

Even worse, sometimes others won’t let us forget it!  We can feel defined by one mistake or failing.  The worst thing to say to a young person is “Oh, you’ll never change!”  The Good News – the Gospel of Jesus Christ, is that we can change: the past can be redeemed, and we can be set free for life.

In our Gospel today Jesus says, “I am the Way, the Truth and the Life.” (Jn 14:6) The way that leads to life is first of all hearing from Jesus the Truth about ourselves.  The truest thing about each one of us is that we were created in the very image of God, and that we were made for Life and Love.

And Jesus came to unbind us from everything which prevents us living this truth.  On the cross, Jesus overcame sin an death, all that would bind us to the past.  Through his resurrection he opened the gate of LIFE – eternal life.  It is supremely this Paschal mystery which gives us hope – hope that after a seven hundred year history of conflict and violence, peace is possible in Ireland.  Hope that after decades of violence and injustice, peace is possible in the Middle East.  “Are you optimistic about peace in the Holy Land?” Desmond Tutu was asked.  “No, I’m not optimistic, but I am hopeful.”

I believe we who follow Jesus Christ are called above all to be purveyors of hope.  Into a world which is so often cynical and despairing, bring a word of hope.  Always be ready, says St. Peter in his first letter, to speak of the hope that is in you. (I P 3:15) Perhaps today you could think of one person to whom you can bring a word of hope.

Is there somebody in your life whom by a word or an action you can help to unbind, help to set free?  Give them hope.  For that is God’s gift to each one of us.  Give that gift to another today.

May the God of hope fill you with all joy and peace in believing, so that you may abound in hope, by the power of the Holy Spirit.  Amen. (Rom 15:13)