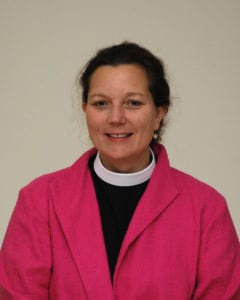 I had no idea what to say to this woman whose life had been changed in a moment in time. It was an accident that happened in the midst of living in this world to the fullest, the consequence of which made death seem preferable. She fell on a bicycle path. Her way back toward some semblance of life was impossible to fathom.

I stood by her hospital bed with family and friends, feeling as powerless spiritually as was she, physically and emotionally. Almost everything was broken and much rendered paralyzed, save the life-altering words from Communion Under Special Circumstances: “I am the living bread which came down from heaven.” “Abide in me and I in you.” She said they were comforting words because the only thing left she could do was “abide,” and the only medicine that could heal her broken limbs and nerves was the body and blood of Jesus.

Providentially, the card I left with her after we had shared communion seemed to illustrate her spiritual landscape. It was a photograph of either sunrise or sunset – impossible to tell which – only that it was at the brink. What was visible was predominant darkness and the sun right above the horizon, lighting that darkness. She was living in the in-between time; the not-knowing time. The words written inside the card stated simply, “I am the Light of the World. Whoever walks with me shall not walk in darkness but shall have the light of life” (Jn 8:12).

Into this reality – and every other circumstance like it – comes the unique voice of the Gospel According to John. This is a Gospel that speaks with powerful metaphorical phrases such as “I am the Light of the World.” A Gospel filled with signs and symbols and wonders. “I am the bread of life. The one who eats this bread shall never be hungry” (6:35). A Gospel filled with opportunities for relationship with the living God who manifests in myriad ways. “I am the Good Shepherd. I know my own and my own know me” (10:11). A Gospel that knows the power of abiding. “I am the vine and you are the branches. Abide in me and I in you” (15:4). A Gospel filled with provocative and impossible hope. “I am the Resurrection and the Life” (11:25).

The ancient Church fathers called the Gospel of John the most “spiritual” of the Gospels for good reason. I’d like to think it was because the writer was trying to explain the mystery of the person of Jesus.

Compared to its synoptic counterparts, Matthew, Mark, and Luke, John is a complicated and reflective, rather than descriptive, book. The writer seeks not just to relay the facts but to explain the meaning behind them. Scholars think it was composed between 80 and 110 ce, and traditionally it was attributed to John, son of Zebedee, one of the original twelve disciples.

Tradition also suggests that, because he knew of the other three Gospels, John decided to offer a different voice, one of a Jewish Christian who knew Greek well and had a profound and life-altering relationship with the Risen Christ. It appears that the writing took place in the Ephesus area of Turkey famous for Paul’s letter to the Ephesians and perhaps one of the few fully intact New Testament cities left than can help fill in the blanks of our biblical imagination. (See www.ephesus.us). There still stands there an active church dedicated to Mary the mother of Jesus and John the beloved, where the prayers of the faithful continue to be stuck in its walls, inside and out.

The great New Testament scholar Raymond Brown divides John’s Gospel into four parts. First comes the Prologue (Jn 1:1-18), which Episcopalians hear on the Feast of the Incarnation each year. “In the beginning was the Word and the Word was with God and the Word was God” (1:1-14). The next section Brown calls the Book of Signs (Jn 1:19-12:50). It shows all the ways in which Jesus reveals himself to the world through signs and wonders. These signs and wonders are told almost exclusively without the use of parables, which characterize the Synoptics. John’s stories depicting Jesus’ life and ministry also are told over a two-and-a-half to three-year period (as opposed to a one-year period in the Synoptics). In John’s Gospel, there are three journeys to Jerusalem as opposed to one penultimate journey culminating in the Passion narrative as in Matthew, Mark, and Luke. According to Brown, John’s Gospel continues into the Book of Glory (Jn 13:1-20:31), which depicts Jesus’ life, death, and resurrection as manifestations of God’s intention and presence. Compared to the Synoptics, John’s narrative has some glaring omissions, particularly if the writer had knowledge of any of the other three Gospels, since he fails to mention Jesus’ Temptation in the Wilderness, the Institution of the Last Supper, the Sermon on the Mount, the Lord’s Prayer, and the Transfiguration. The Gospel concludes, in Brown’s characterization, with the Epilogue (Jn 21:1-25), which offers additional resurrection narratives and a conclusion not found elsewhere.

Each Gospel has its own unique voice, and John’s is particularly compelling through its use of metaphorical language with double meanings: temple and body (2:25), water and spirit (7:37-38), lifted up and exalted (12:32). But perhaps the most compelling invitation of John’s Gospel is how it is rooted and grounded, first and foremost, in relationship. The “I AM” statements for which the Gospel is famous hearken back to Moses’ encounter with God through the burning bush at Sinai when God says “I am who I am” or “Tell the Israelites that I am sent you” (Ex 3:14). These phrases capture the unfolding of mystery intrinsic to every relationship. We try to articulate what it means to express our love by sharing a part of who we are, an aspect of our identity with the other. For instance: I am a priest, a wife, a chaplain, a sister, a daughter, a gardener, a hiker, a friend. And so Jesus says to us: “I am the Resurrection and the Life,” “I am the Good Shepherd,” “I am the Vinedresser,” “I am the Light of the World,” “I am the Way, the Truth and the Life,” “Before Abraham was I am.” All of these articulations of Jesus’ identity invite us into relationship with Jesus and the God whose love he reveals. 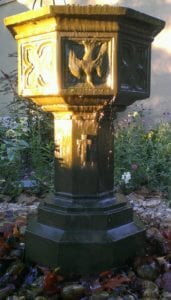 There are as many ways to strengthen our relationship with the God we encounter in John’s Gospel as there are words within it, images that reflect it, themes that drive it. One of the most compelling ways is to consider how it introduces to us the “beloved disciple.” This is he to whom the Gospel refers as “the one whom Jesus loved.” This is the disciple who is with Jesus at every significant moment in his life (13:23-26, 19:25-27, 20:1-10, 21:4-7, 21:20-23, 21:24) but who is not, according to most scholars, considered to be one of the twelve. A deeper understanding of the beloved disciple opens the door for an expanding of our own relationship with the Word made flesh, dwelling among us.

I’ve experienced this expanding relationship in my life, and John’s Gospel has been central to its growth and transformation. I grew up in the deep South, where every roadside held a sign for John Deere tractors and a church sign proclaiming John 3:16. Yet in my adult years, I’ve found the Gospel an inspiration for prayer more varied than that I encountered as a girl. Opening myself to new ways of praying with John’s Gospel has been an opportunity to look at how my image of God had changed as my geography shifted and my education grew. My willingness to step outside the boundaries of more conservative religion has freed God to be different as well. Since then, I’ve used John’s Gospel for lectio divina, as words found only in John’s text became talismans for my prayer. I’ve explored the Gospel through its themes of Jesus as friend, as the Way, the Truth, and the Life, the Good Shepherd, the True Vine, the Bread from Heaven, Living Water, and so many other rich images. I’ve culled the Scripture for answers to contemporary social issues such as racism or poverty. All were means of God’s grace in that moment in time and with this most challenging of Gospels. I suspect if you are willing to dip your toes into this baptismal pool, you will find your life of faith strengthened and your loyalty confirmed — no matter what is before you.

I have been in a thousand hospital rooms since that day long ago at Yale New Haven Hospital, when communion was shared between strangers who knew not whether they were facing never-ending night or the dawn of a new day. Whatever the case may be, it was John’s Gospel that bridged the divide between hell and heaven and cemented the relationship with the God who saw each and every person in that room that day – and every room since – as beloved.