For a few of us brothers, one of the highlights of our pilgrimage to the UK this past summer was a trek to The Eagle and Child Pub in Oxford.  It was not necessarily for the food and beer that we wanted to visit this pub, although the Slow-cooked Steak, Amber Ale & Mushroom Pie is quite delicious.   Rather, the reason for this sacred journey was that this was a regular meeting place for a literary group known as “The Inklings,” of which C.S. Lewis and J.R.R. Tolkein were members.  Sitting in a cramped corner of this pub with Luke, Keith, Nicholas, and Lucas, I couldn’t help but to wonder if perhaps we were sitting at a table where Lewis and Tolkein might have sat, discussing literature, philosophy, religion, and theology.  One of my favorite poems from Tolkein’s epic trilogy The Lord of the Rings kept playing over and over in my head.  It begins:

Indeed, this became my own personal mantra for the pilgrimage:  “Not all those who wander are lost!”  Tonight’s sermon is the second part of our Epiphany preaching series on vocation entitled Gifts for the Journey.  This evening we will explore:  The Gift of Detours.

The lessons we heard just a few moments ago are I think the quintessential scriptures of the pilgrim.  You may know that the word pilgrim is defined as:  one who journeys in foreign lands, and this is an apt description of the Israelites in our lesson from Exodus.  Enslaved by Pharaoh and subjected to hard labor in Egypt for over 400 years, Moses is picked by God to lead the Israelites out of bondage.  Upon setting out, God offers a covenant to the Israelites through Moses:  they will abide in community together under His law and in return, He will give them a land of their own.  We hear the beginning of that journey this evening:  When Pharaoh let the people go, God did not lead them by way of the land of the Philistines, although that was nearer; for God thought, ‘If the people face war, they may change their minds and return to Egypt.’ So God led the people by the roundabout way of the wilderness towards the Red Sea.  God was with them for the journey and God’s presence was indicated by a pillar of cloud by day, and a pillar of fire by night.

But even though God sought to protect the Israelites, the journey was not without its challenges.  Almost immediately after Pharaoh released them, he changed his mind and pursued them.  After a harrowing escape at the Red Sea, the Israelites continued the long arduous journey and became tired, hungry, and restless.  We all know the cliché scene of a family on vacation: after a couple of hours, the kids bored and restless in the backseat of the car, repeatedly ask their parents, “Are we there yet?”  Multiply this by about 600,000 people and you will begin to see the pressure Moses was under.  When returning from the top of Mt. Sinai with the tablets containing the Law, Moses finds the Israelites worshipping idols and has to plea on their behalf to God.  Later, the Israelites are complaining about food and we hear Moses lamenting to God, “I am not able to carry all this people alone, for they are too heavy for me. If this is the way you are going to treat me, put me to death at once and do not let me see my misery.’  How many parents have prayed that after hearing “Are we there yet,” ad nauseum?  Yet God did deliver on His promise, forty years after the pilgrimage began, spanning four books of the Torah, and an entire generation later.  I cannot help but to wonder if the Israelites would have undertaken the journey had they known what it would entail.

In our gospel lesson from Matthew, we read about another famous pilgrimage; one undertaken by wise men from the East who traveled to Jerusalem, following a star.  They came to pay homage to a holy child who was being called ‘the king of the Jews.’[ii] We read that this caught King Herod off guard.  The house of Herod did not take kindly to the idea of anyone else claiming to be ‘king of the Jews.’”  This must have been amplified by the fact that these foreigners were not of Jewish origin, suggesting other nations perceived the fallacy of Herod’s sovereignty.

Immediately, he summoned the chief priests and the scribes to inquire where the Messiah was to be born.  Recalling the prophet Micah, they reveal Bethlehem as location.[iii]  So Herod, like any great politician, cunningly sends these visitors from the East toward Bethlehem to seek out this perceived rival, asking them to return to Jerusalem to confirm and report what they find so that he too may pay the child homage.  The wise men set out toward Bethlehem, following the star once again until it stopped.  Matthew says they were overwhelmed with joy and they entered the house, paid homage to Jesus, and gave gifts of gold, frankincense, and myrrh.  Being wise sages, they left that place and travelled home via a different route, having been warned in a dream of Herod’s motives.

I am struck by the journey these wise men undertook.  They traveled a long way to pay homage to this child, Jesus, even though they were not themselves Jews.  I cannot help but to think that they knew that the title ‘king of the Jews’ was too small and did not encapsulate who this child was.  They knew Jesus would change the destiny of all who sought him, and this was something they had to see for themselves.  They risked their lives by disobeying Herod and set out on another path home, potentially lengthening their journey.  Something about this encounter with Jesus confirmed their instinct.  The founder of our community, Richard Meux Benson, whose feast we keep today, took note of this and wrote:  “They had come to Him who was Himself the Way, and the Truth, and the Life.  None can come to Christ at Bethlehem and go away as they came.  The road along which this company of travelers went was itself a type of the spirit with which they went.  How careful ought we to be when we have come to Jesus that we do go forward by ‘a new and living way,’ not by the way by which we came!  God leads us onward.”[iv]  Or again, in the words of Tolkein, “Not all who wander are lost.”

So what can we take away from these quintessential stories about pilgrimage?  First, I would say that vocational pilgrimage is about ‘response.’  We do not usually undertake a dangerous and costly journey on our own volition.  Rather it is usually something we are called to, a mission that has already been set in motion.  The Israelites did not up and decide one day that they were fed up and were going to wander away from Egypt.  Their journey was a response to a mission that was set in motion by God, enacted through Moses with the assurance of a life of freedom, security, and abundance; a contrast from the life of slavery that they had long endured.  The word vocation is from the Latin ‘vocare,’ which literally means ‘to call’ or ‘to summon.’  That is different from a job or chore which one undertakes, there is more than one person involved in a call.  Vocation is a communal act.

Second, perceiving a vocational call from God does not mean there journey will be void of challenges.  Be assured that you will face resistance at some point in your pilgrimage.  This was something that Fr. Benson was keenly aware of.  In his essay on the significance of Fr. Benson’s spirituality, theologian Martin Smith writes:  “He taught from his own experience and in the monastic tradition that spiritual life involved a costly engagement with the Satanic; there was no exploration into God which bypassed encounter with evil not as a mere external hostile influence but as a power within the soul.”  He continues, “….evil cannot be planned or persuaded away; it must be grappled with at the frontier in our own depths.”[v]  Whenever you speak truth to power, be assured that there will always be a seductive persuasion luring you away from that truth at the very least, or palpable resistance at the most.  This can be seen in both the witness of the Exodus:  being pursued by Pharaoh, doubt infecting the heart at the signs of difficulty, or at the sense of not having the sustenance to continue the journey.  The wise men knew that Herod sought to destroy the child of Bethlehem and risked their lives to thwart his attempt to manipulate them.  When you feel lost, pray for a star to guide you.  Ask Jesus to shed some light on your path.

Last, I would say the journey is epic and there will be many detours as you make your way. Do not worry about what the full pilgrimage will entail.  Instead, in the tradition of 12-step spirituality, ask God, “What’s the next right thing.”  Ask God for the provision you need for only the next step.  This could be a word of advice from a friend, a sense of encouragement in the midst of adversity, or perhaps a morsel of bread and a sip of wine to sustain you.  Remember, you have been called to a mission that has already been set in motion, and God will provide what you need along the way.

On this feast day of our founder, Richard Meux Benson, we brothers would like to announce the launch of a new vocational website about our life:  www.catchthelife.org.  This site witnesses to the truth we brothers of SSJE have felt called to, traces the history of our founding by Frs. Benson, Grafton, and O’Neill, tells the story of the men who set out on the frontier of religious life in the Anglican tradition, and how we live out that mission today, 151 years after our founding.  If you feel a sense of vocation, of ‘being called’ to a God’s mission in unique and countercultural way, or know of someone who does, please pay a visit to www.catchthelife.org.

I close with Fr. Benson:  “Christ is the end of all the earthly ways.  They who come to Him are seeking a heavenly country, and desire not opportunity of returning to the old from whence they came out.  This is true even when we have to return to the old world.  Our coming to Christ changes everything, and therefore even to the old scenes we return with changed hearts and new powers.  It is indeed a great thing to return to the old world by a new way of heavenly life, and to live, therefore, in the world as those who have been with Jesus, than it is to enter upon new spheres of life but with the old heart.  That would be to set about new things in the old way.  The necessary thing for us is rather to set about old things in a new way.”[vi]  Amen. 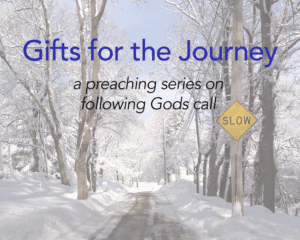 This sermon is part of the “Gifts for the Journey” series. We hope you’ll check out the other sermons in the series.