Br. James Koester on how baptism enables us to share in the divine life.

Before coming to the monastery, I served for a number of years as a parish priest in a little parish on the west coast of Canada. I’d been in the parish for about six months when a woman named Alice came out of church one Sunday and told me she had only ever heard me preach one sermon. I knew that that wasn’t true. Alice and her husband had been in church nearly every Sunday since I had come to the parish and on the rare occasion they missed a Sunday they called the rectory ahead of time to explain why they were going to be absent! I obviously looked confused because she went on to say: “What I mean is that it doesn’t matter where you start, you always end up back in the same place: at baptism.” I began to apologize, but she cut in, “Oh no, no. No need to apologize. I wasn’t complaining. I was agreeing with you, because baptism is so important for the life of a Christian.” Alice of course was right. Baptism is important because baptism is about nothing less than sharing in the divine life of God.

“O God, who wonderfully created, and yet more wonderfully restored, the dignity of human nature,” we pray in the Collect for the Second Sunday after Christmas, “Grant that we may share the divine life of him who humbled himself to share our humanity..." In the Incarnation, we believe that as Christ shared in our human life, so we share in his divine life through baptism. As the Prayer Book Catechism reminds us, “Holy Baptism is the sacrament by which God adopts us as his children and makes us members of Christ’s Body, the Church, and inheritors of the kingdom of God.” Thus we share in the divine life of God by being made children of God, by being made members of Christ’s body, and by becoming heirs of the kingdom of God. If we truly believe what we say, all of this happens at the font where we die to sin and rise to newness of life through the waters of baptism, just as the First Letter of Peter reminds us: “And baptism . . . now saves you – not as a removal of dirt from the body, but as an appeal to God for a good conscience, through the resurrection of Jesus Christ, who has gone into heaven and is at the right hand of God, with angels, authorities, and powers made subject to him.” In this way, even now and not at some future date, because of our baptism, we begin to share the reality of that divine life we speak of in the Collect, and which Christ promises to all who believe in him: “to all who received him, who believed in his name, he gave power to become children of God, who were born, not of blood or of the will of the flesh or of the will of man, but of God.”

When we begin to understand that baptism does something to us now, and that that something is nothing short of incorporation into the divine life of God, then we can begin to experience the Trinity, not as some kind of mathematical puzzle – or a scientific experiment using water, ice, and steam showing that each of them is the same chemical but simply in a different form. Rather, we will know the doctrine of the Trinity as a lived reality. By our baptism we are invited not merely to understand, but to experience the Trinity.

Behold what you are; may we become what we receive. 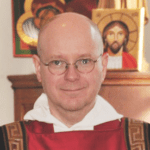 Br. James Koester, SSJE was born in Regina, Saskatchewan, Canada. He holds a B.A. in History and English literature from Trent University, Peterborough, Ontario, and an M. Div. from Trinity College, Toronto, Ontario. He was ordained to the diaconate and subsequently to the priesthood in British Columbia, where he served parishes in Parksville and Salt Spring Island.

In 1989 he came to the United States to test his vocation with the Society of Saint John the Evangelist, where he was life-professed in 1995. Br. James has served in a wide range of leadership posts in the Society, currently serving as the community’s Superior. During his time in the Society he has traveled widely in the United States, Canada, Great Britain, the Holy Land, and in Africa, leading retreats and workshops, preaching, teaching, and offering spiritual direction. His personal interests include genealogy, the study and writing of icons, and beekeeping.