A Sacrifice of Thanksgiving

Br. Eldridge Pendelton explores the richness of the fundamental act of Christian worship, the Eucharist.

A SACRIFICE OF THANKSGIVING

For me it all started with a red light when I was nine years old. That summer I was spending two months with my aunt Grace at her home on the Texas Gulf coast. One day I was playing outside with Sharon, my cousin who was my age, and Judy from next door, when the two of them started arguing about whose church was best, resuming the religious wars of 500 years ago. Sharon was a Presbyterian and Judy a Roman Catholic. Both sides slung abuse, but in the midst of it, Judy, realizing I had never seen a Catholic church and ever the missionary, offered to take me to Saint Mary’s some afternoon.

The first thing I noticed through the gloom of the unlighted interior was a red lamp hanging above the altar. When I asked, she said that Jesus was there in that box behind the altar, and that at every mass he hosted a meal for everyone. He fed them on bread and wine which he mysteriously changed into his body and blood. In that way, he forgave them, strengthened them, nourished them, protected them, and answered their prayers. No one could see him, but he was always there. You could feel his presence. Furthermore, Sr. Mary Agnes, her teacher, said he lived in every Catholic church.

That was my first exposure to the Christian teaching that Christ is present in the Eucharist, and it made an indelible impression. I went away that afternoon thinking that grape juice in shot glasses and crumbled crackers did not compare to what she had, and resolving that one day I would be a regular at those suppers where Jesus fed everyone.

I went away that afternoon resolving that I would be a regular at those suppers where Jesus fed everyone. 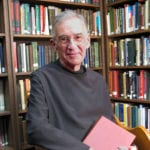 Br. Eldridge Pendleton, SSJE (1940-2015)  met members of the Society of Saint John the Evangelist (SSJE) when he was twenty-one. Later, after teaching at several universities and directing a museum in Maine, he joined SSJE in 1984. Eldridge served in many capacities, including archivist, Senior Brother of Saint John’s House in Durham, North Carolina and Director of the Fellowship of Saint John. He was a life member of the Confraternity of the Blessed Sacrament. Despite many health challenges in recent years Eldridge remained full of vigor and in 2014 he published, Press On, The Kingdom, a biography of Charles Chapman Grafton, one of the founders of the Society. Eldridge loved recounting stories of the founding brothers of the Society and their enthusiasm for the religious life and God in the hope of inspiring future monastics.