Close to the Heart of God

Br. Geoffrey Tristram explores how Intercession brings us, and those for whom we pray, close to the heart of God.

CLOSE TO THE HEART OF GOD

“I remember you constantly in my prayers night and day.” So Paul writes in his second letter to his beloved Timothy (2 Timothy 1:3). At the very heart of Paul’s ministry to the young Christian churches was prayer. Paul prayed constantly for them. “I thank God every time I remember you, constantly praying with joy in every one of my prayers for you all,” he writes to the church of Philippi (Philippians 1:3-4). And to the church in Colossae: “We have not ceased praying for you” (Colossians 1:9). It is this kind of prayer – intercessory prayer – which underpins and empowers Paul’s entire ministry. And it is this prayer of intercession which has the power to transform and empower our own lives as well as the lives of those for whom we pray.

The first disciples learned about prayer from Jesus. They prayed with him and near him. Simon Peter finds Jesus before daybreak praying in a deserted place (Mark 1:35). Luke tells how Jesus would withdraw to deserted places to pray (Luke 5:16) and spent a whole night on a mountain in prayer to God before choosing the twelve disciples (Luke 6:12-13). He later prays on the mountain where he is transfigured; he rejoices in prayer because his message is being received; he prays in the Garden of Gethsemane; and prays during the hours on the cross. In John chapter 17, he prays that great prayer, which is a kind of summary of the inner meaning of all his prayer – giving glory to God the Father.

After Jesus died, was raised from the dead, and ascended into heaven, the disciples believed that although he was now exalted to the right hand of God in glory, he was still near to them and sharing very intimately in their earthly lives. Above all, they had no doubt that he continued to pray continually for them. And so we get the imagery in Paul’s letters, as well as in the Letter to the Hebrews, of Jesus as “high priest” whose intercession continues. As the Letter to the Hebrews puts it, “He always lives to make intercession for them” (Hebrews 7:25). Jesus prayed for us while he was on earth, and he carries on praying for us still. But how does he pray for us? Interestingly, the verb we translate as “to make intercession for us,” in the original Greek is the verb entunchanein. This likely does not mean “to make petitions” nor to say any words at all. It means rather “to meet with” or “be with someone on behalf of another.” So when we talk of Jesus “making intercession” for us to the Father, as the Letter to the Hebrews puts it, we should not imagine Jesus talking to God about us. Rather, it is Jesus being intimately close to his Father and carrying us whom he loves on his heart and into the heart of God.

Jesus prayed for us while we was on earth, and he carries on praying for us still. 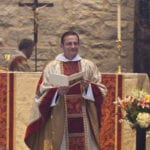 Br. Geoffrey Tristram, SSJE was born in Wales and studied theology at Cambridge University before training to be a priest at Westcott House Theological College. He came to the United States eighteen years ago to join SSJE and has pursued a ministry of teaching, spiritual direction and retreat leading. He recently served as the community’s Superior and for three years he served as chaplain to the House of Bishops. Before coming to SSJE he served as a parish priest in the Diocese of Saint Albans, as well as the head of the Department of Theology at Oundle School, a large Anglican high school in the English Midlands.