In her masterful study of the book Genesis, Jewish scholar Avivah Zornberg notes that this is the first statement uttered by God in the creation narrative that does not immediately bring something into being. It is a brief soliloquy, an aside, a window into God’s thoughts. God does not act upon this thought directly. He creates the animals, and brings them to Adam to receive names. Among them, “there was not found a helper as his partner.” In his commentary on this text, the medieval rabbi Rashi proposes that God knew this would happen. He imagines Adam, the Human,as the one who seeks yet does not find, as God presents the animals to him already in pairs. At the conscious, painful realization of his human aloneness, sleep overwhelms him. Like God, Adam has been great in this aloneness. He has stood vertically, upright, among all the animals who creep, slither, and swarm horizontally upon the earth. But in greatness, aloneness, verticality, he has known no equivalent Other. For this to happen, Zornberg writes, Adam “must, in a sense, diminish himself” and “come to know the rightness of a more complex form of unity.”[ii] He falls, horizontally upon the earth, as if under divine anesthesia. Eve comes into being.

The mysteries of the One and the Two, Unity and Duality, Union and Division are at the heart of this morning’s gospel text from Mark, and at the heart of the Genesis narrative cited by Jesus himself. There is the mystery of Adam, who came into being as One but came to a realized Personhood as Two: Adam and Eve. There is the wondrous mystery of human marriage, by which two “are no longer two, but one flesh.” There is the painful mystery of human divorce, by which one flesh is torn and made two once more. But all these, I believe, point to a mystery more encompassing and profound: the universal yearning to taste the original unity that is our birthright, the single-heartedness that is at the core of Jesus’s message.

We know, in our hearts, that we cannot return to the undifferentiated, innocent oneness of childhood; we cannot grow backwards. Yet we mourn this. We know also that we have crossed the threshold of mature being: we are differentiated, marked by experience. We have left the garden. We have left our father and our mother and the world is now full of choices. Each one matters, and by each we become a little more, or a little less, of what God intends for us. Yet precisely because we can choose – in the same way that Adam chose Eve – the possibility of a new kind of union opens before us. This is an inner unity given graciously, gratuitously, and directly by the hands of God.

Jesus ends his discussion with the Pharisees with a terse statement that pierces their smoke and mirrors with a beam of pure, white light: So, then, what God has united, human beings must not divide.[iii] In our Rule of Life, we read, “the Spirit stirs in the depths of our being and unites all that we are, even what is broken and not yet formed, with the risen Lord.”[iv] The Holy One desires our oneness: a union with God that manifests itself inwardly, as all the seemingly disparate pieces of our humanity are stitched together by an invisible hand, into a single fabric, a radiant and eternal wedding garment. The Holy One desires our oneness: a union with the world that manifests itself to our outward experience, as we consent to take more and more of the created order as the sphere of our personal concern and compassion. The Holy One desires our oneness: a one-ing with God that manifests itself as an entrusting of self beyond deliberation or hesitancy, as the Lover to the Beloved – neither one nor two, but both one and two.

So then, what God has united, human beings must not divide. You may know these words from a more familiar paraphrase, “Those whom God has joined together let no one put asunder.”[v] Indeed, primed as you may have been by the many times you have heard that phrase at weddings it may be impossible to hear this gospel passage as being about anything other than marriage (or, if read cynically, about divorce, adultery, and the fiercely idealistic standards of a supposedly celibate, wandering Palestinian rabbi of long ago).

But in light of the historical context of this passage, some things become quite clear. The question posed by the Pharisees concerns Jewish marriage in first century Palestine: a world in which only a man could divorce his wife (not vice versa – which was only possible under Roman law). The Pharisee’s question pertains to what is allowed, what is technically lawful: from the outset, they are concerned with a narrow definition of religious correctness that misses the full scope of God’s invitation to live in Love. Finally, the reasons for which a man was permitted to divorce his wife could be, by accepted custom, quite arbitrary – if the marriage produced no children, or if the husband found a woman he deemed more suitable. In light of these details, we begin to see already how copying and pasting this passage into contemporary discussions of marriage in the Church simply will not do. And we begin to see how Jesus’ reframing of the conversation already radically revalues the personhood of women. But then we arrive at these hard, hard words of Jesus, spoken in private to his disciples no less: “Whoever divorces his wife and marries another is guilty of adultery against her.”[vi]

What is Jesus saying here, and what can it possibly mean for us? These words of the Gospel are not just for married people. I would even go so far as to say that they are not primarily about marriage, though the question of marriage forms the occasion in which Jesus offers this teaching, and our theology of marriage as a sacrament begins here. These words are for all of us: we, who are married and single, committed and seeking, divorced or not, heterosexual or not.

Jesus’s highest priority is the unification of the children of God, beginning with our inner unification. Each of us are many: many selves compete for our attention and vie for dominance in an endless drama. When they work at cross-purposes in a child of God a divided heart becomes a hardened heart, the way a deep wound must develop scar tissue to repair the breach.  Lost in this bewildering plurality, it is all too easy to become desensitized to the true nature at our core. The profound invitation of Jesus is to take up a life made whole by voluntary, sacred commitments that shape us into whole, unified, single-hearted people. Such commitments initiate a life-long journey into that original unity that is our birthright: a oneness with God, one another, and within our own deepest selves. Marriage may be and often is a supremely holy, supremely efficacious commitment for the unfolding of this oneness, by God’s grace, if one has a vocation to married life. Jesus’s sober warning, a warning that burns white hot in the fire of his Love, is a warning against wrongly chosen commitments. These are the kinds of commitments by which we become more fragmented, divided, double-hearted people, and in the process, often force others to do the same.  The person who callously sets aside a holy commitment because it is technically permissible will, Jesus says, have to undergo a reckoning: with the soul-dividing effect of such choices.

And yet, human beings divide. By merely living and breathing, we divide. Sin in us divides. We divide, because, in the words of Fr. Bruno Barnhart, “we prefer a manageable complexity to an unmanageable simplicity.” The nature of Christ is divided to suit the human preference for reason. The human person is divided and subdivided in acts of violence gross and subtle, body torn from soul and soul torn from spirit. Creation is divided beyond recognition, torn apart at the seams, by the knowing avarice of multinational corporations and the callous ignorance of individual consumers. The Church is divided by the tribalism of her members, the refusal to live with open hearts amid difference and disagreement, and willful disregard for the mysteries of the faith to avoid scandalizing the postmodern mind. When marriage is entered coercively, without love or diligent discernment, hearts, bodies, and lives suffer division. When it is ended, however thoughtfully and graciously, division of lives is inevitable, and the scars that division leaves behind. And perhaps no life will taste the restlessness of interior division more painfully than the life which has not listened to the tug of true vocation.

Surrounded by the wreckage of all this outer and inner division, there are days or moments when we may feel truly alone: stranded on a stretch of coastline strewn with the wreckage of sin, our own and those of the whole world. In all this wounded, divided creation, is there a helper to be found as our partner?

Yes. Yes. Yes. I do, he says. I will, with God’s help. Jesus Christ: the Bridegroom of souls. What God has united, human beings must not divide.

The one who sustains all things by his powerful word, the one through whom God created the worlds, the one who bends low over our feeble bodies on that ship-wrecked coastline says, “It is not good for you to be alone. Take me. Take my hand.” Jesus says:

Before your divorce, I AM: in the vows of your baptism.

Before your re-marriage, I AM: in the vows of your baptism.

Before your ordination to the priesthood, I AM: in the vows of your baptism.

Before your Clothing as a Novice, I AM: in the vows of your baptism.

Before your Initial Vows: I AM in the vows of your baptism.

Before you professed Vows of Poverty, Celibacy, & Obedience for Life,

I AM: in the vows of your baptism.

Before any sacred commitment you have succeeded or failed at keeping,

I AM: in the vows of your baptism.

Ahead of all beginnings and after all partings, I AM: in the vows of your baptism.

And if you have not yet made the vows of baptism, perhaps your creator and sustainer is beckoning you deep within to step more fully into a Life oned with Him, and the deep sense of rightness that comes with such sacred commitment to Christ, the Savior: “Here, at last, is bone of my bones and flesh of my flesh.”[viii]

We have left the garden. We have left our father and our mother and the world is now full of choices. Each one matters, and by each we become a little more, or a little less, of what God intends for us. Yet precisely because Christ has chosen us  – the possibility of a new kind of union opens before us, a second simplicity that unties all knots and gathers our patchwork past and our unknown future into the hands of a Redeemer who is not ashamed to call us brothers and sisters. 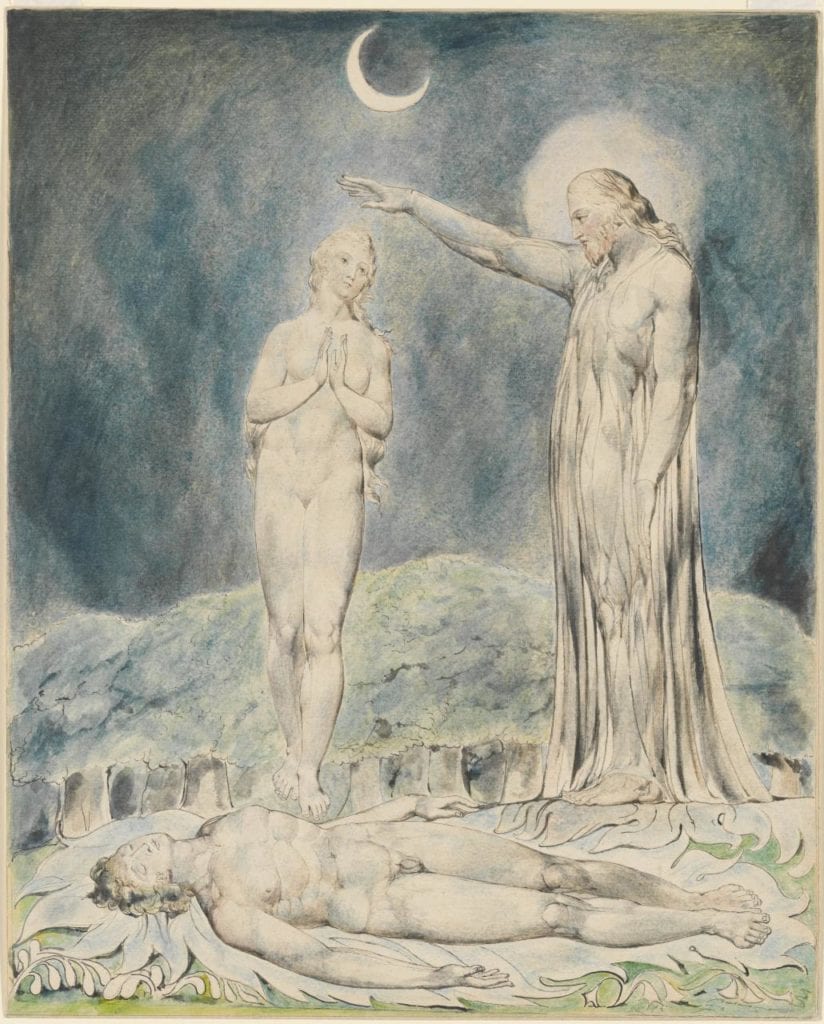 Above: William Blake’s The Creation of Eve

[ii]Avivah Zornberg. The Beginning of Desire: Reflections on Genesis. p. 16.

[iv]TheRule of the Society of St. John the Evangelist. Chapter 21, “The Mystery of Prayer.”