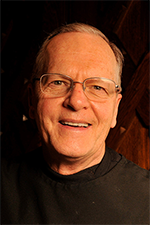 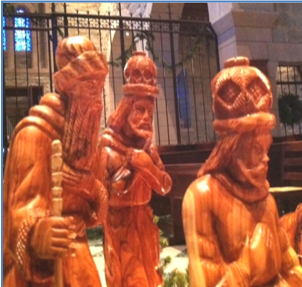 The prophecy of Isaiah is revealed in Bethlehem. The early church saw today’s celebration as a revelation: “Arise, shine; for your light has come, and the glory of the LORD has risen upon you… Nations shall come to your light, and kings to the brightness of your dawn.”  The kings come. The three kings from foreign lands come to Bethlehem. The New Testament Greek name for them is “magoi” or, as we would say, “magi,” which means “fortune tellers” or “wizards.”[i]  (The English word, “magician,” comes from the Greek, magi.) The Greek name magi also includes astrologers, and so it’s no wonder that the magi reportedly saw a certain star rising, knew it was significant, and followed it. What was this star? There’s been endless speculation down through the centuries, some of it based on the Zodiac, some of it based on astronomy.[ii]The Gospel according to Matthew makes neither explanation nor apology for revealing that the wise men had followed a star.

The wise men came from “the East,” but whether that is near East, or middle East, or far East is only a guess. There are countless different traditions. For example, Saint John Chrysostom, a fourth-century archbishop of Constantinople, believed the three magi came from Yemen because, in those days, the Kings of Yemen were Jews. But there’s no indication in Matthew’s text that they were Jews. A very early Armenian tradition saw them neither as Jews nor as starting out together, but rather meeting up along the way, each of them a king from a foreign realm. Each of them had discovered and followed this star: one named Balthazar, a king from Arabia; another was Melchior, a king from Persia; and a third, Gaspar, a king from India. I’m saying three kings, or three Zoroastrian priests, these three magi, but we’re actually not told how many of these wizards came to Bethlehem. Three is just a guess because of the three gifts we’re told they bring: three kings because of the three gifts so no one comes empty handed.

In Matthew’s gospel the gifts are presented to the child-who-would-be-king: gold, frankincense, and myrrh. These are certainly precious gifts, then as now, gifts worthy to be given by a king to a king. And why those particular gifts? You can only imagine the legends: from Arabia, gold, the most precious mineral from earth[iii]; frankincense, a symbol of prayer, as the psalmist says, “let my prayer like incense be”[iv]; and myrrh, the fragrance of heaven, used in the anointing of bodies in the tomb (ultimately Jesus’ body!), and also mixed with oil for healing.[v]  This morning, here in our Chapel, those of you who seek prayers for healing will be anointed with oil and myrrh; and the incense we are using today is frankincense from Jerusalem.

The wise men are overjoyed to find the Christ child. We’re not explicitly told why they were overjoyed. They present their gifts, and they kneel in homage. At some point, they set off for their homeland, or their homelands. But there’s one more supernatural augury: a dream warning them not to go back the way they had come. They had come via King Herod in Jerusalem, who was as threatened and vindictive as the wise men were attracted and elated at the prospect of greeting this child to-be-king. The magi do not report back to Herod, but go home another way. “They had come to Jesus who was himself the Way.” These are the words of the founder of our community, Richard Meux Benson, written more than a century ago. “They had come to Jesus who was himself the Way, and the Truth, and the Life. None can come to Christ at Bethlehem and go away as they came. Our coming to Christ changes everything, and therefore even to the old scenes we return with changed hearts and new powers. The necessary thing is to set about old things in a new way.”[vi] To set about old things in a new way. And I think they did. I think they were forever changed, these wise men. But I also think Mary, Joseph, and Jesus were forever changed because of their encounter with the magi.

The long-awaited Messiah was for the Jews. Mary and Joseph were Jews. The angel’s revelation was that Mary would give birth to the Christ child, the Messiah, who would become the King of the Jews. Where Matthew’s gospel begins is not where it ends. Somewhere in Jesus’ life formation, he becomes not just the King of the Jews, but also the Savior of the World. His message and his heart enlarged. By the end of Matthew’s gospel, Jesus is saying, “Go into all the world…”[vii] When did things begin to change? When did it happen that Jesus’ message and mission – not just to Jews but to the whole world – begin to enlarge? With the magi. With the visitation of the wizards at Bethlehem. Jesus, of course, was an infant. Mary and Joseph took it all in. Something very significant happened in their encounter with the magi from foreign lands, and they were forever changed.

Are we explicitly told this in the text? No. This is my interpretation of why Matthew remembered this encounter with the magi.Matthew did not personally witness the magi’s visitation. It’s a story that had been told, and retold, and remembered for at least 50 years before Matthew set out to write his version of the Gospel. It was that significant a story to be remembered and retold for more than 50 years: 2 generations. I think this is when it began to happen: how these faithful, probably-illiterate and rather simple Jewish parents, Mary and Joseph, had their world enlarged, and because of it they would raise Jesus differently. When Jesus ultimately begins his public ministry, he says, repeatedly, “You have heard it said, but I say…” When did these new revelations for the world begin to dawn on Jesus? With the visitation of the wizards. The infant, Jesus, did not understand this consciously, of course. But Mary and Joseph did, and something new began to be seeded into Jesus’ life formation. When Jesus ultimately finds his voice, people are amazed and ask, “What is this wisdom that has been given him?”  “Where did he get these things? [viii] From many sources, surely, including from the wise men in his infancy.

Back to Bethlehem. Almost immediately after the visitation of the wise men, King Herod acts on his fears and sets out to eliminate the potential rivalry of this newborn child. This is what the church remembers as the slaughter of “The Holy Innocents,” when Herod killed all newborn males around Bethlehem.[ix] Jesus is spared because Joseph was warned in a dream. Where is Joseph told to take Jesus and his bride for sanctuary and sustenance? Where to go? Not into their homeland, but to a very foreign land, to Egypt.[x] Isn’t that fascinating?

Were the wise men, these astrologers, these kings changed because of their encounter with Jesus. I presume so. We’re not told, but I presume so. Is it that they became followers of Jesus?  No. I don’t think so. There was nothing to follow. If they were old enough to be “wise men” when they visited Jesus, Mary, and Joseph, then they were probably old men. Average life expectancy in the first century was mid 30s. And we know that Jesus did not begin his public ministry until he was about 30. So these wizards went back to their homeland and never heard a word from Jesus – other than the cooing of an infant – and they died long before Jesus began his public ministry. But I’m sure they were forever changed in their encounter with Jesus.

So what do we make of this story of the wise men and the legends that have followed them down through the centuries? Several things:

What’s not to love about the wise men? Beyond being picturesque and rather exotic in the Christmas crèche, they give us a prodding inspiration about God’s ongoing revelation, far beyond all that we could ask for or imagine.[xiv] God’s epiphany.[xv] Live in wonder. Anticipate inspiration and revelation “in ways beyond which you could ask or imagine” as we live into God’s future. Jesus came “to make all things new.”[xvi] And that is still true.

[i]The Birth of the Messiah; A Commentary on the Infancy Narratives in Matthew and Luke, by Raymond E. Brown, pp. 166-201.

[ii]Some astronomers have speculated this Gospel remembrance coincided with a “planetary conjunction,” when Jupiter, Saturn, and Mars passed each other around 1 c.e.

[ix]The slaughter of “The Holy Innocents” is reported in Matthew 2:16-18. This, says Matthew, was in fulfillment of the words of the prophet Jeremiah (31:15): “A voice was heard in Ramah, wailing and loud lamentation, Rachel weeping for her children; she refused to be consoled, because they are no more.”

[xii]I am appealing here to “prevenient grace.”  See John 10:16: “I have other sheep that do not belong to this fold. I must bring them also, and they will listen to my voice. So there will be one flock, one shepherd.”  See also 1 John 2:1-2: “My little children, I am writing these things to you so that you may not sin. But if anyone does sin, we have an advocate with the Father, Jesus Christ the righteous; and he is the atoning sacrifice for our sins, and not for ours only but also for the sins of the whole world.”

[xiii]Krister Stendahl (1921-2008), Church of Sweden Bishop of Stockholm, was a theologian and New Testament scholar, and who was a professor at Harvard Divinity School for many years.

[xiv]Ephesians 3:20-21: “Now to him who by the power at work within us is able to accomplish abundantly far more than all we can ask or imagine, to him be glory in the church and in Christ Jesus to all generations, forever and ever.”