It all began quite simply: with a letter mailed in Boston on 7 October, which arrived in Oxford sometime after. The letter caused quite a stir, because in a matter of days the recipient was on his way halfway around the world. The effect of that one letter is still felt here 150 years later.

The letter came from the parish of the Church of the Advent in Boston, inviting Richard Meux Benson to supply a priest to assist the Advent’s Rector for a period of some months. Father Benson set sail on All Saints’ Day 1870, and arrived in Boston twelve days later to explore the possibilities the letter opened to him. This Allhallowtide, then, marks the 150th anniversary of our Society’s arrival here in North America, and it all started quite simply, with a letter. Before leaving Oxford, Father Benson wrote to members of the parish of Cowley St. John, of which he was the Rector, and encouraged them in his absence to be diligent … in your prayers.

Since March 2020, our own worlds have become quite small. For many, travel even on the subway is no longer possible. We are confined to our homes, our neighborhoods, our immediate surroundings. Even an outing to do a few errands, or take a walk, requires planning and preparation that, a few months ago, we would never have imagined. Visits with family and friends – if they are not part of our bubble – are confined to Zoom, or outdoor meetings on park benches. Medical appointments and visits to the Emergency Room are incredibly complicated. Kitchen tables have become offices and children’s classroom, as some juggle the responsibilities of work and parenting at the same time.

As small as our worlds have become, this story of Father Benson and the initial days of the Society in Boston has resonance for me right now. It all began quite simply, with a letter. That letter transformed lives not just in 1870, but since 1870. I believe that the same can be true in our own day. Since becoming Superior, one of my joys has been the opportunity to write notes and letters to countless people. Many who have received a handwritten note from me have told me what a delight it was to receive an actual piece of mail. I don’t pretend that my ministry of letter writing will change the history of the world, or even the Church, as did that letter of 1870, but I do know that for a moment, someone’s day was brightened. I invite you to join me, and to reach across time and space, and make someone’s day a little brighter with an email, or better still, a phone call or a handwritten note. You never know what a difference you will make in someone’s life through such a simple act.

The other piece of this story that resonates with me is Father Benson’s encouragement to his parishioners to be diligent … in your prayers. For the Christian, prayer is not telling God what to do, rather it is an expression of love. As Father Benson teaches us, in prayer we learn to love whatever we take with us into the very being of the One who is eternal Love. Many, including the Brothers, ache because we are unable to gather in person for worship. Yet in spite of our physical separation we are united to one another in prayer through the God whom Jesus calls our Father. At a time when we are physically separated it is perhaps especially important to be diligent … in your prayers, so that we may all be united, one to another, in God’s unwavering love for each of us.

Each time the Brothers gather for worship, I am aware of all those who cannot be physically present, and I hold you in my heart before the Throne of Grace.

Know that each time the Brothers gather for worship, you are being held before the Throne of Grace. 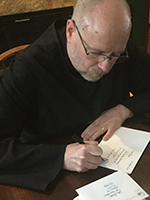 Faithfully in the One who acts through simple deeds of love,