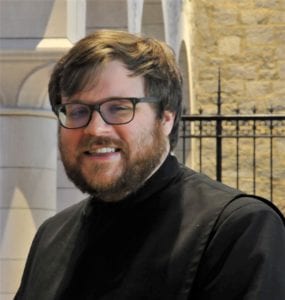 I think each time he does this, it’s to point out something surprising about the relationship in question. Tamar is the first mentioned; she, having survived two husbands who God struck down for their sins, was regarded as cursed, and was ostracized from her family; through cunning deceit, including deliberately getting her father-in-law to impregnate her under the guise of being a prostitute, she proved that she was being mistreated, and so acquired for herself the security and status of marriage, bearing sons to a husband who was not struck down for his sins. Rahab is mentioned after her; she was a Canaanite, and quite possibly a prostitute or the owner of a brothel. Yet, she was also regarded as a holy and righteous woman, without whom the Israelites could not have conquered Jericho. Ruth is next; she was a Moabite, a member of a nation normally in conflict with the Israelites, but she demonstrated her faithfulness to God so strongly that an entire book of the Old Testament is named for her. And then there is Bathsheba, the wife of Uriah; King David committed adultery with her, and then had Uriah murdered to cover up the subsequent pregnancy.

All of these raise questions. They certainly raise some moral questions for us, and for Matthew’s project of ensuring a picture of Jesus that fulfills the Jewish expectations of prophesy, they could raise questions of the Jesus’s lineage or his Jewishness. But Matthew knows that the primary attribute of the messiah is in being a son of David. Here, Matthew is proving that David’s own lineage, including his grandparents and his own offspring, are not the stellar pedigree, without blemish, that people might assume. This matters for Matthew, because he’s about to drop the big reveal: this is Joseph’s lineage, not Mary’s. Mary is the last woman Matthew mentions in this lineage, and it highlights a surprise, just like the others do. This is only Jesus’s lineage indirectly, through the marriage of Joseph to Mary, the marriage that did not result in Mary’s pregnancy with Jesus. It’s not what we expect, if we’re expecting a son of the House of David. But Matthew’s whole point is that the entire lineage, including David’s own lineage, is full of things that we wouldn’t expect.

Matthew immediately jumps from assuring his audience of the validity of Jesus’s lineage, to telling the story of the angel, coming to Joseph in a dream to assure him in the midst of his own doubts: that this was from God, that Mary had been faithful, that they should not get a divorce. Matthew then moves quickly to foreign religious officials, the magi, recognizing the importance of Jesus’s birth, all while the King of Judea seeks to kill the newborn Christ. Matthew shows the parents with their new son fleeing into Egypt, away from the Promised Land, for safety, a total inversion of what we’re supposed to expect. And instead of just indulging in paradox or plot twists, Matthew dots these parts of the story with appropriate prophesies from Jewish scripture.

And from this place in the story, he moves forward three decades, beginning with the ministry of John the Baptist, who proclaims, “Do not presume to say to yourselves, ‘We have Abraham as our ancestor’; for I tell you, God is able from these stones to raise up children to Abraham.” And so John turns this same logic about Jesus to those who would follow him: don’t feel safe because of your pedigree, because of your ancestors, because of your inheritance. God does not care. It is God who fashions heirs of his promise, not human will or human flesh, because God is the lord of life, and even from lifeless stones can fashion for himself worthy inheritors.

I could go on. This theme is carried throughout Matthew’s Gospel. But here, with the genealogy, Matthew lays his opening gambit, his assurance that the only normal part of all of this, the only consistent logic, is that God’s will is done, even in the midst of the failings of human expectations. So we’re challenged: we should not become reliant on simply expecting the Christ we know. And we’re comforted: we should not become reliant on images of ourselves that degrade and dismiss. Our histories are often less than stellar. Our personal histories, our family histories, our church histories, our national histories, often have blemishes. Much in our past is unsavory. Much in our past is unreasonable. Much in our past is sinful, and the wage of sin is death. But there were stumbling blocks, lifeless stones, in Jesus’s past, too. And from these stones, we are all made the children of God.