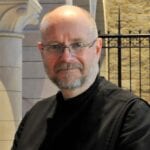 2020 was a year of immense challenges, filled with a great deal of loss, grief, uncertainty, anxiety, and death. For most of us, it was a year like no other, and will undoubtedly have an impact on us for years to come.

We Brothers had our own loss this year, with the death of Brother David Allen in August. He was the last of his generation of men in the Society, and his death marks a dramatic shift, since there is now no one who came to the community before 1984. We have been touched by the many notes we have received describing David’s kindness, his warm and affectionate way of greeting people, and his generosity of spirit. While his death was during the lockdown, we were able to share his funeral liturgies online. I like to think that, despite David’s age, he would have been quite amused and proud of the fact that he was the first member of the community to have had his funeral watched via the internet by countless people.

Having to close the Monastery Guesthouse and Chapel was also a real loss for us. When we were founded in 1866, we were founded as a mission society. Father Benson had a suspicion of strictly contemplative communities and wanted our monastic life to be rooted in mission and ministry to others. When the pandemic forced us to close the Guesthouse and Chapel, we knew it was vital that we discover new ways of mission and ministry which did not require physical proximity.

We began to dip our toes into the world of livestreaming, first with Evening Prayer on Saint John’s Day, and then with choral Evensong and Sermon every Saturday. This was a surprising step for our community. Over the years, whenever the possibility of livestreaming was suggested, all of us – not least of whom was me – dug in our heels and resisted the concept. How could a community whose patron was the Beloved Disciple and whose underlying theology was the mystery of the Incarnation, exercise a ministry that was not physically embodied? When the pandemic hit, we spent a great deal of time wrestling with the theology of the Incarnation in a digital age, and especially our understanding of the Sacraments. How, we asked ourselves, could something viewed on a computer screen be regarded as incarnational, and what is the Eucharist if it is virtual and not physical? When we tested streaming Evensong, we immediately discovered the very real hunger many were experiencing. We also experienced, as we hosted our first virtual FSJ gatherings, how very real the feeling of connection could be online.

As we continued to experiment with other forms of online ministry, we learned that virtual is not the polar opposite of incarnational. A significant turning point was a community education day with Dr. Lisa Kimball and the Reverend James Farwell from the Virginia Theological Seminary, in which we focused specifically on sacramental theology. While Anglican eucharistic theology and practice is focused on the eating and drinking of the bread and wine, our day helped us explore other aspects of the Eucharist. We pondered not simply the Real Presence of Christ in the Sacrament, but also the real presences of Christ in gathered community, word proclaimed and broken, prayers shared. With a renewed and indeed expanded understanding of eucharistic theology and practice, we then felt able to livestream the Eucharist on a regular basis.

In all of this, we have tried to be faithful to Father Benson’s vision that we be men of the moment, able to do old things in new ways. We have been supported, encouraged, and dare I say, even prodded in this by many of you, and for that we are enormously grateful. You have been agents of grace and transformation for us during these strange and challenging days. We long for the day when we can safely reopen the Guesthouse and Chapel, and welcome you back to share with us in this holy place. In the meantime, know how grateful we are for your abiding friendship. We pray for you constantly.

Posted in 2021 Winter, Cowley Magazine
← I Will Take You To MyselfLetter from the FSJ – Scott Christian →