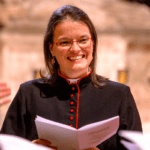 The sensorium of the Monastery Chapel on Memorial Drive can be overwhelming. The smell, the silence, and the interplay of light and darkness confront the senses the moment the door opens. They immediately tell my body to stop, to slow down, to absorb, and to sink in. Stepping into a place where the walls are steeped in incense and immersed in generations of prayers prayed and psalms chanted, I find the constant demands of life shifted into a new perspective. Belief seems to come more easily in this space. God’s presence seems more tangible surrounded by the wood, stone, and light. For almost twenty years, SSJE has been a place of retreat and friendship for me. Even after I moved across the Pond more than a decade ago, SSJE still feels like home to me. It has held me in great joy and deepest sorrow. It’s a place where God has been both present and silent, where discernment has seemed both easy and impossible, and where I feel known and loved for who I am. The sensorium of the Monastery embodies all of these things and more. It is a place I can trust, a sacred space in which the world stands still.

As much as I long for the busy-ness of the world to hush, that’s not what the gospel teaches us belief is about. The gospel of John is distinct amongst the gospels – and even Paul’s writings – in how it describes belief. Belief is never a noun. For John, belief is always a verb made up of a number of actions: believing, knowing, seeing, abiding, remaining. For the writer of the Fourth Gospel, belief isn’t an intellectual exercise, but a fully embodied trust of our lives to God. Believing is an action we do, not a noun that we possess. As a verb, believing not only demands something from us, but also involves a relationship with someone else in whom we trust (God). That John uses this verb, to believe, almost one hundred times emphasizes its significance and the challenge John presents to us.

When I enter the Monastery Chapel, I often assume that I need to stop acting in order to enter the space fully and to reconnect with God, who can feel so far away when life becomes overwhelming. My assumption all too often has been that the silence, the smells, the light and the darkness are moments of inaction. I come to the Chapel – even online these days when trans-Atlantic travel is difficult – in order to stop the action and flurry that distracts me from God.

But John’s gospel challenges my assumption. It suggests that the sensorium of encounter is precisely where the action begins. The actions of prayer, sacrament, word, silence, and psalm enacted in the Monastery across each day encompass some of what belief means for me. These actions encountered in the daily rhythm of prayer form the seeds of belief that embolden me to go into the world and enact the gospel. John’s gospel tells us that the whole purpose of the story and the signs within it is “so that you may believe” and having believed, may love, forgive, serve, and know forgiveness and peace. I don’t have to be in the Monastery space to tap into this web of belief. The stability of monastic life – the intentional and radical act of abiding and remaining (two of the central verbs from John’s gospel) – and the knowledge that even across an ocean I can be part of that rhythm of prayer, fuels my believing and offers ever-tangible hope in an unstable, demanding, and overwhelming world. Thanks be to God for the SSJE community and the active, visible, Johannine witness that they offer, encouraging belief not only within the sacred sensorium on Memorial Drive, but well beyond it.

Jenn Strawbridge is Associate Professor in New Testament Studies and Caird Fellow in Theology at the University of Oxford and Mansfield College, Associate Priest at St Andrew’s Headington, Canon Theologian of Blackburn Cathedral, and a Wiccamical Prebend of the Diocese of Chichester.