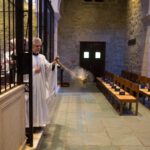 “Questioning the faith,” this article’s title, holds within it two possibly contradictory meanings. Consider the paradox implied in the word “questioning”: does it mean questioning in the faith or a questioning of the faith – or both?

And furthermore what do we mean by “the faith”? Is the faith a collection of beliefs and doctrines, the teachings of an organized religion? Or is the faith something more: a series of practices, a tradition, a way of living? When Jesus asked the question, “Who do people say that I am?” Jesus sought to draw both a confession and an act of faith from his disciples, based on his teaching and example. How does Christ now prepare us to respond to such a question? How are we called to engage with the faith that has been handed down to us, especially when our own experience might be as riddled with questions as with certainties?

In this article, I want to share an oft-overlooked treasure for navigating this challenging terrain: “An Outline of the Faith commonly called the Catechism” in The Book of Common Prayer 1979 (pages 845-862). As the opening statement describes it: “This catechism is primarily intended for use by parish priests, deacons, and lay catechists, to give an outline for instruction. It is a commentary on the creeds, but is not meant to be a complete statement of belief and practices; rather, it is a point of departure for the teacher, and it is cast in the traditional question and answer form for ease of reference” (“Concerning the Catechism,” BCP, 844).

The two technical terms catechism and catechist are derived from the Greek verb katecheo which means “to teach or instruct by word of mouth.” Literally it means to “sound down,” i.e. to learn exactly by sounds (meaningful repetition); to learn by nuanced repetition.

In the early Church, a person who hoped to be baptized was received as a catechumen and entered into a period, often three years in duration, of intensive instruction or catechesis. Catechists would teach the seekers in their own words, drawing on their experience as members of the Christian community and its practice: the appropriation of the (Hebrew) scriptures, the received apostolic tradition of Jesus’ first disciples, and the common worship and prayer realized and enacted in the risen Christ present in their midst. Only after such instruction were the catechumens baptized into Christ’s death and rising, and admitted to the Eucharistic Mysteries.

Catechumenal instruction prepared the candidates to speak from their own mouths answers to the questions which would be asked of them in the baptismal rite. Thus, the questions, which the catechumens had brought to their catechists during the time of oral instruction, were asked in turn of the baptismal neophytes anew, as they were washed in water and signed with oil of chrism, sacramentally symbolizing their new life in the Holy Spirit as members of Christ (BCP, 307-308). The rote repetition of questions and answers that we hear in each iteration of the Baptismal Service actually derives, then, from a prior live exchange of real teaching and questioning that the catechumen would have engaged in before being deemed ready to baptized.

In later times, as infant baptism became the norm, catechetical instruction was deferred until “the age of reason” was reached, and such instruction was offered in preparation for the rite of confirmation, which is a personal reaffirmation of Christian belief and commitment accompanied by the laying on of hands for strengthening in the Holy Spirit.

Printed catechisms – cast in question and answer format – came into use as an outline of instruction in the Church’s teaching and practice during the Renaissance/Reformation era. I myself was instructed in the 1928 Prayer Book’s Catechism during a course of catechesis (or “confirmation classes”) prior to my own examination by Bishop John Burgess and “the apostolic rite of laying on of hands in Confirmation” on June 23, 1963, at age twelve.

While my attachment to the Prayer Book Catechism dates to the earlier version, the 1979 Prayer Book has played an even more important role in my own life of formation, as well as in the historical ministry of SSJE. Our own late Brother, Robert (Bob) Greenfield played an important role in combining the 1928 short Catechism with several additional “Offices of Instruction” into the form we find in the 1979 Prayer Book, skillfully employing his personal theological insights and amplifications in this work.

Today, these expanded and enriched texts still guide the sharing of and instruction in the life of faith that govern the practice of preparing candidates for Baptism and Confirmation. This mutual questioning by catechumen(s) and catechist(s) explains, then, how the Catechism is useful in the first half of our paradox: questioning in (into) the faith. As a candidate hears the questions and responds with the answers of the Catechism, the candidate questions their way into the faith.

In this regard, the Catechism borrows the method of the Apostle Paul in his letters to the young churches. Paul often asks questions of his converts to prod them to seek new depths and nuances as they grow in the faith of Christ. In the Epistle to the Romans, Paul presents challenging questions addressing the concerns of Christians in an often hostile world filled with many conflicting “gospels.” “Do you not know that all of us who were baptized into Christ Jesus were baptized into his death?” (Romans 6:3). In his own responses to this and other rhetorical questions, Paul provides “answers” from the scriptures, the history of the people of Israel, and his own experience of conversion. His answers parallel the faith life of Christians in every age.

It’s important to note that, in his writings, Paul avoids use of the word “faith” as a noun, as a list of intellectual or philosophical propositions to which assent is made. Paul’s teaching rather reflects on “faith” as entailing active engagement in a personal relationship with the living God in Christ. For Paul, faith is a verb, a word connoting the inward and outward actions by which we respond to God’s initiative of love in bringing us into being and making us a new creation in Jesus Christ.

We often speak colloquially about “believing” in Christ, a word which carries an emphasis on our mental assent to certain beliefs. In the Pauline spirit, I would rather coin the term “faith-ing,” to describe our active response to the questions and questioning which arise as we are drawn into eternal union with divine Being. Faith is active. The never-ending inquiry of our “faith-ing” asks that we continually return to the fundamental questions of being and life which are so graciously interwoven into the Catechism’s teaching. In the Catechism we learn that questioning is not an opposition to faith, but an act of faith. The questions which “An Outline of the Faith” poses are primarily those asked of us and by us as our faith seeks understanding.

The Catechism provides a way into a prayerful and faithful pondering of and responding to ultimate questions in religious belief. Consider how the headings alone provide a theological progression of topics: Human Nature; God the Father; The Old Covenant; The Ten Commandments; Sin and Redemption; God the Son; The New Covenant; The Creeds; The Holy Spirit; The Holy Scriptures; The Church; The Ministry; Prayer and Worship; The Sacraments; The Christian Hope.

In its treatment of each of these topics, the Catechism provides a way, a point of departure, for the ongoing dialogue of “the Faith” with the sciences and cultural diversity, with adversity and strife, with dying and death. To take one example: in Human Nature, human identity as created in the image of God is not tied to a particular creation myth/history or to the concept of “original sin.” Rather human likeness to God is based on a theological anthropology set in the context of freedom “to make choices: to love, to create, to reason, and to live in harmony with creation and with God.” Similarly, in The Christian Hope, the concepts of heaven and hell are removed from traditional cosmologies as “places”; instead they are defined as states of relationship based on choice: “By heaven, we mean eternal life in our enjoyment of God; by hell, we mean eternal death in our rejection of God.”

In these and myriad ways “An Outline of the Faith” offers a structure and foundation for the prayerful questioning of our faith. This resource is one that even the most educated and established Christians might find worthwhile to engage in their own life of prayer and formation. Consider the questions as a starting point for prayer and reflection, a way of opening a dialogue.

Frequent reflective engagement with the Catechism is a worthwhile and rich means for our continuous “faith-ing,” as we seek to question, engage, and live out our faith in confident hope and trust.

Q.  What, then, is our assurance as Christians?

A.  Our assurance as Christians is that nothing, not even death, shall separate us from the love of God which is in Christ Jesus our Lord. Amen (BCP, 862).