Letter from the Deputy Superior

An Open Letter to Those Who are Spiritual-Not-Religious

Letter from the Editor

Identity & Belonging in the Great Sacraments 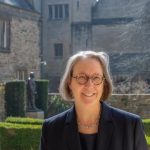 At Ascensiontide in 1922, just after she had fully committed to being a part of the Church of England after many years on the margins, the writer Evelyn Underhill went on retreat for the first time at Pleshey in Essex. The others there at the same time were schoolteachers from the East End of London, whom she did not know. After the experience, she wrote:

“The intense silence seemed to slow down one’s far too quick mental time and give one’s soul a chance. To my surprise a regime of daily Communion and four services a day with silence between, was the most easy, unstrained and natural life I had ever lived. One sank down into it, and doing it always with the same people, all meaning it intensely, and the general atmosphere of deep devotion – for the whole house seemed soaked in love and prayer – cured solitude and gave me at last really the feeling of belonging to the Christian family and not counting except as that” (Evelyn Underhill, Fragments from an Inner Life (Morehouse, 1993) 112-113).

Many of us who are members of the FSJ, and others who have enjoyed retreats at SSJE, may have an a-ha moment of recognition here. Yes, that’s what it’s like! Together we create and share – just for a while – an intimate community in silence, within the daily rhythm of prayer and meals. The monks, whose home the Monastery is, provide the stability of that daily rhythm, with consummate hospitality and gracious friendship, that enables this.

And then, Covid. For so many of us, this has been a solitary if often intensely busy time. My own experience may be a particularly unusual one, in that I have lived in a community of one sort or another for most of my life, so a deep engagement with others, while simultaneously carving out a positive sense of solitude in the midst of that busyness, has always been a part of my life. I have deeply missed community: not only regular retreats with the SSJE monks but also the eating, worshiping, and exchange-of-ideas communities that form part of daily life in my current college setting.

This has been loneliness rather than solitude. It has felt like I was being thrown back onto my own resources and they were, frankly, a bit thin. Worship with the monks online has been one gift, the writings of Evelyn Underhill another. I have long admired and studied her work on mysticism; I found myself turning now, with new eyes, to her essays on prayer.

Underhill’s spiritual trajectory was to go from a deeply individualistic prayer life to an appreciation of community and the importance of corporate worship (her last big book was titled Worship). I have, through the pandemic, been going in the opposite direction – and perhaps many of you have, too? Underhill prompted me to meditate on the possibility that “the real and vital communion between souls is invisible and spiritual – so deeply buried that we can think of it as existing unbroken below the changeful surface of daily life” (Evelyn Underhill, “Life as Prayer” in Collected Papers of Evelyn Underhill, Ed. Lucy Menzies (Longmans, Green and Co., 1946) 56).

This pandemic time has been a lesson for me in learning to trust that we are indeed all bound together through prayer. It’s not just a matter of whether we are gathered or dispersed as worshiping communities, but the very truth of spiritual communion – “the fact that we are not separate little units, but deeply interconnected.” It is through prayer that “we seek communion with one another on an invisible plane and through a common surrender to an invisible love” as Underhill put it.

The notion of being knit together in communion and fellowship, to borrow the language of the collect for All Saints Day, has begun to take on new meaning in the light of my spiritual quest during this pandemic time.

Jane Shaw is Principal of Harris Manchester College, Professor of the History of Religion and Pro-Vice-Chancellor at the University of Oxford