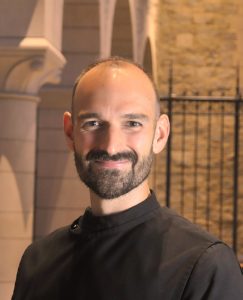 I don’t often think of Jesus’s courage, but that’s what has come to mind during my prayer with today’s Gospel passage. Knowing that his end was near, Jesus shows his closest friends how unlike their world his kingdom will be. The Teacher and Lord humbles himself and performs the work of a servant or slave, overturning all expectations and proprieties.

This act takes courage—courage that we can look to; courage, no doubt, that our departed Brother David Campbell looked to in his challenges of leadership. Facing an English Congregation that was ageing and declining in numbers, Father Campbell managed the withdrawal from the longstanding missions in India and South Africa, closed the Mission House in Oxford, and dispersed the remaining Brothers to continue the Society’s ministries as long as possible. His actions took courage, as did the humility to accept that the Society in England’s end might be coming.

Not all our departed brethren, whom we remember today, faced the same choices or wielded the same authority that Father Campbell did. But as I listen to their obituaries at Compline, I am often struck that, whatever their strengths and weaknesses, their successes and failures, they each embodied a very special kind of courage. In persevering in the religious life, each revealed how courage is bound up in simply living life, in all its complexities and contradictions.

These complexities, and the seeming contradictions between inner and outer realities that Saint Paul signals, cry out for courage, courage met and supported by God’s grace. The courage and grace to do what you know is right, even if it goes against expectations; to show who you are, despite narratives that others may impose on you; to persevere in the life and work to which you are called to your end.

Today, we all face another ending. As we close this liturgical year and begin Advent this evening, we are reminded of our common vocation as Christians: to be Christ’s light, to be children of light, in a dark world. And this vocation, Saint Paul tells us, is urgent work: “See, now is the acceptable time . . . now is the day of salvation!” For some, this work may be making difficult decisions; for others, simply being present for someone in need. Whatever our work, we can look to those who have gone before us for examples of the courage we need now. And, in the words of the Advent collect, we can pray for the grace, and courage, to cast away the works of darkness, and to put on the armor of light, equipped to do the work God has given us to do.