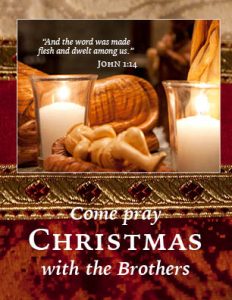 The Christmas season is actually twelve days long (hence the familiar carol), running from Christmas Eve (December 24) until the Eve of the Epiphany (January 5). At the Monastery, we celebrate Christmas for twelve whole days, including by observing several significant feast days that connect the Feast of the Nativity to early spreading of the gospel: the feasts of Saint Stephen (the first martyr of the Church), Saint John the Evangelist, and the Holy Innocents. These days’ mix of joy and harsh realities – what we are being called to give our lives to – marks this season, then and now.

One significant way that we celebrate Christmas at SSJE is actually by not beginning early. It’s Advent straight until December 24, and only then do we begin to decorate. At the heart of our Chapel decorations is an olive wood crèche crafted in olive wood by Palestinian Christians in Bethlehem.  A generous gift made it possible for the Brothers to commission this stunning work of art. In worship during Christmastide, the blessing of the crèche at the beginning of the Eucharist acknowledges and celebrates the gift of Christmas: Christ in our midst.

Visitors to the Chapel will also notice the festive evergreens that deck the choir grille. “Greening the Church” is an old English tradition, which nods to our community’s roots in Oxford. The fruit at the base of the crucifix (rood) on the grille is symbolic of the fruit of the tree of life in the Garden of Eden.  The cross itself is often referred to as the tree of life, and partaking of its fruit (the bread and wine of the Eucharist) reverses the curse of the Fall. At the base of the rood, you’ll also spy the “Partridge in a pear tree,” an ancient symbol for Christ on the cross.