Skip to content
Welcome to the Society of Saint John the Evangelist
What is God’s revelation to you? What have you come to know to be true. Don’t deny your mind; don’t disparage your studies; don’t denigrate your rationality – but claim it all at a deeper level. What have you come to know at the deepest level to be absolutely true about life and love, and the source of it all?

Posted in BGUAW
Leave a comment
The English word “dignity” comes from the Latin, dignitatem, which means worthiness. The English word “worthiness” comes from an Old English root from which we get the word “worship.” So our pledging to respect the dignity of every human being is about our ascribing worth and worthiness to others, reverencing them as persons – as children of God – and acknowledging God’s image in them. 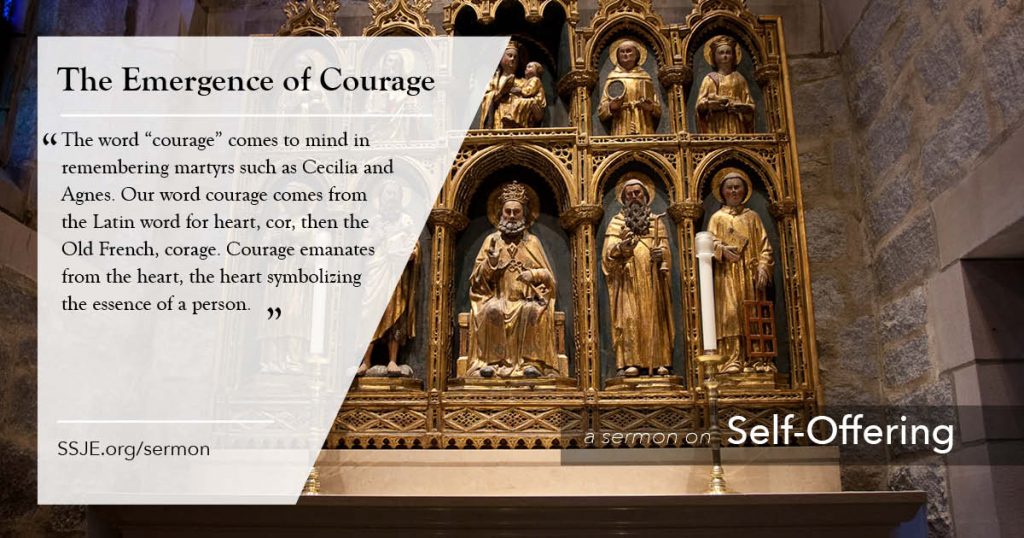 In the calendar of the church we remember today two early Christian martyrs: Saint Cecilia and Saint Agnes. Saint Cecilia, as a young woman, was married. She converted to Christianity members of her own household; however in the face of the demand from the Roman government to offer sacrifice to pagan idols, a demand she refused, Cecilia was martyred year 280. Saint Agnes, a 12-year old child, was brought to a civil magistrate, before whom she refused to renounce her Christian faith, and she, too, was martyred, this in year 304. Saint Ambrose of Milan wrote about Agnes that “all were astounded that she should come forward as a witness to God when she was still too young to be her own mistress.” The various accounts of Cecilia and Agnes’ martyrdom are appalling, which show something of the impact of the life and death these two young women made upon their contemporaries and succeeding generations.

The word “courage” comes to mind in remembering martyrs such as Cecilia and Agnes. Our word courage comes from the Latin word for heart, cor, then the Old French, corage. Courage emanates from the heart, the heart symbolizing the essence of a person. We hear Jesus say, “Do not let your hearts be troubled, and do not be afraid.”[i]  But courage is not something to work on. Becoming courageous is not a spiritual calisthenic. Courage comes as a byproduct, a characteristic or an action which is quite invisible to the person themselves. I have never once heard someone described as having done something courageous who sees this about themselves. Courage is in the eye of the beholder, not in the awareness of the actor. END_OF_DOCUMENT_TOKEN_TO_BE_REPLACED 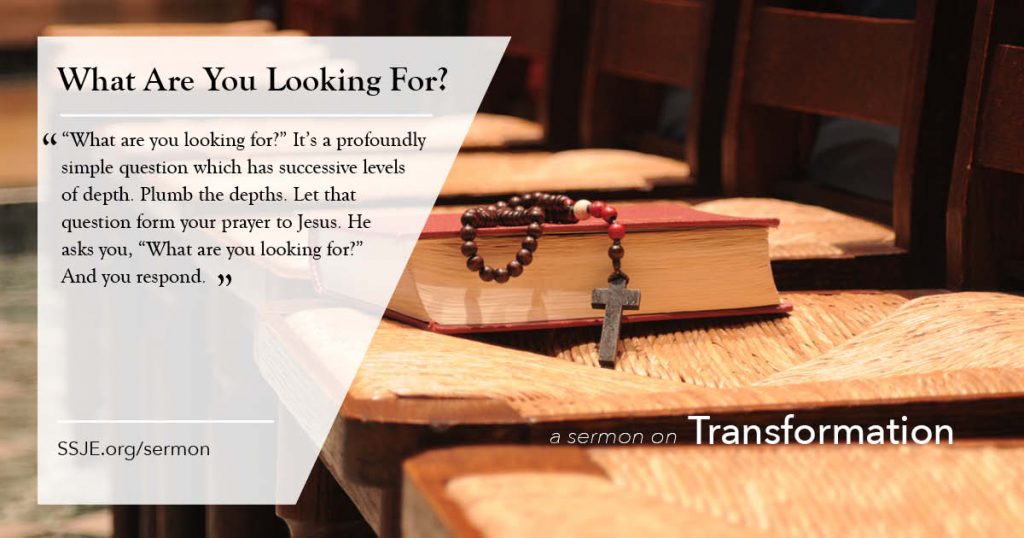 We could infer from this Gospel account that John and Jesus had met for the very first time the day before, when John baptized Jesus. John had said, “I myself did not know him.” Not so. They did know one another. They were cousins. They would have known each other since their births, their impossible-to-believe births, which had been predicted by angels. Angels, no less! Jesus, born to an unmarried mother who insisted she had not had a sexual union; John born to a mother who was old enough to be his great grandmother.

If it was important enough for Mary, while she was pregnant, to travel the 90 miles from Nazareth to the Judean hills to see her pregnant Aunt Elizabeth, John’s mother, it is unimaginable that they would not have visited each other after the births of their miraculous sons.[i] Visited many times. No one in the world could understand one another like these two couples could: Mary and Joseph, and Aunt Elizabeth and Uncle Zechariah. These two boys, Jesus and John, had to have known one another, and probably looked to each other, befriended each other, confided in each other, shared the burden of their imposed identities with one another. Both of them loved going into the desert. Maybe they camped together? They were cousins, virtually the same age, the only child of their parents. Neither son had married; neither had pursued a profession that was identified; neither, it seems, had found their voice to fulfill the “angelic predictions” until rather late in life. Both of them, at the time of this Gospel account, were about age 30. They had to have known one another. And known each other very well. END_OF_DOCUMENT_TOKEN_TO_BE_REPLACED

Posted in Prayer, Sermon and tagged Baptism, Conversion, Discipleship, encounter, John 1:29–42, John the Baptist, Presence, Transformation
2 Comments
Jesus begins life as the promised Messiah to his own people, the Jews. Jesus ends life telling his followers, “Go into all the world and make disciples of all nations.” When did Jesus’ mission enlarge? I speculate something happened to Mary and Joseph in their encounter with the wise men from foreign lands. They would raise Jesus differently. 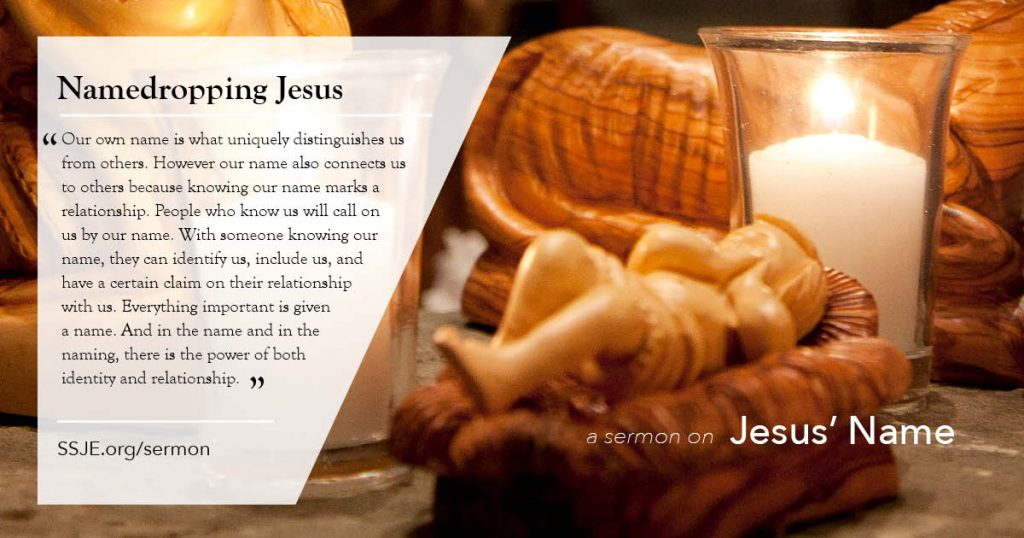 The Holy Name of Jesus

The federal government tracks a lot of information, including “The Top 10 Baby Names” for any given year.[i]For baby girls, currently the most popular name is Olivia, followed by Emma, then Charlotte, Amelia, Ava, Sophia… and on it goes. For baby boys, currently the most popular name is Liam, followed by Noah, then Oliver, Elijah, James, William… and on it goes.

The naming of a baby is no accident, don’t you know? The child’s given name or names may be the contin­uation of a family’s heritage, or the opposite: a sign of a family’s wanting to start afresh with the birth of this child. The child’s name may express identity, or dignity, or hope, or gratitude. Sometimes names demar­cate a family’s history. One of my nephews has a middle name “Taif,” which is Saudi Arabian, because he was born while his father (my brother) was working in the Persian Gulf. We are known, remembered, identified, and called by name.

As children grow up, they will name their belongings, and they will be in relationship with everything they name. Children will often take on new, imaginary names for themselves, and with the names, new exploratory identities. I remember one summer as a young camper far away from home, I told all my cabin buddies that they should call me “Butch,” because I was tough. (That’s probably hard to imagine….) It worked pretty well for a week at camp, but my new identity disappeared when I returned home to face my little bro­ther. He certainly did not know me as “Butch”; he was still struggling to simply say “Curtis” or “Curt,” which he could not pronounce. What he could say was “Dirt.” “Hi Dirt!”, which hardly suited someone trying to be “Butch.” For names to last, they need to fit. END_OF_DOCUMENT_TOKEN_TO_BE_REPLACED

We must know the mind of Jesus, the heart of Jesus, the words of Jesus to speak in his name. The only reason for invoking Jesus’ name is for the sake of love: so that we may love Jesus, and be loved by Jesus, and then love others in Jesus’ name – that is, as Jesus loves them. 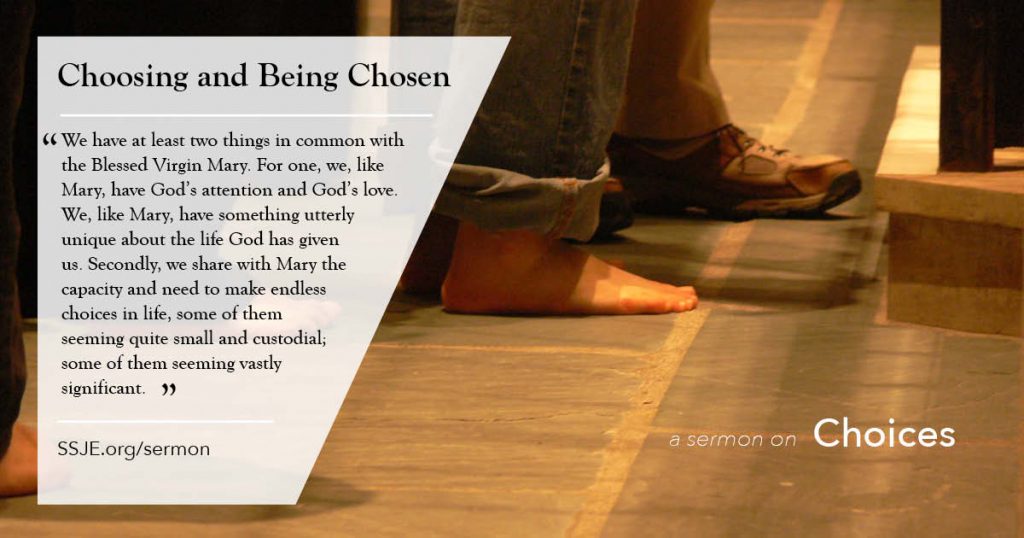 This was not Mary’s first choice. I mean that in two ways. Firstly, Mary is old enough to have made many choices before this. She has obviously committed to the love of her life, Joseph. And she is old enough to have made endless smaller, daily choices like we all make as we navigate our way through the day: decisions about where we go and what we do, the people with whom we communicate, and how; decisions about the work of our hands, our rest, our diet, our dress; our thoughts, our prayer. Lots of choosing this or choosing that, each and every day. When the angel Gabriel calls on Mary with an invitation, this is not her first choice, not her first time of choosing something for her life. She has plenty of experience.

And secondly, this also is not Mary’s first choice, given the impossible plan the angel Gabriel is proposing: that Mary become pregnant in an unimaginable and culturally inadmissible way, prior to being married to Joseph. That is not Mary’s first choice. I infer this because her immediate reaction is fear, and her second reaction is incredulity: “How can this be?” Then, for reasons we are not explicitly told, she ultimately says “yes” to Gabriel’s announcement.[i] END_OF_DOCUMENT_TOKEN_TO_BE_REPLACED