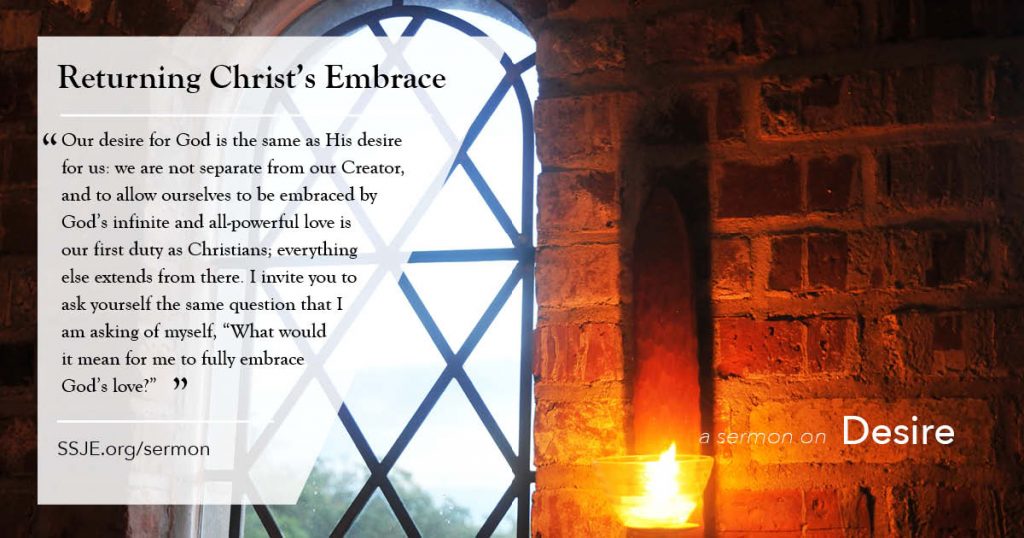 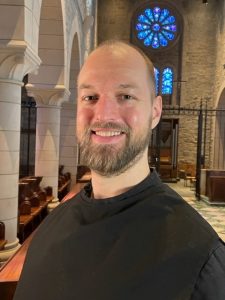 In our Gospel reading today, Jesus utters a profoundly anguished lament over his beloved people, and the hardness of their hearts. Yet in his grief he also speaks of his deep and abiding faithfulness towards them and his desire to envelop them in the embrace of his unconditional love. His message then was the same it is to us today: stop running from God’s love, turn back and be saved. I think the Gospel today invites us to see the ways in which we are still opposing, running from, and rejecting the love of Jesus Christ.

Many of Jesus’ own people opposed His invitation to live in the fullness of God’s love, just as we do today. All of us have resistance to what Jesus invites. Speaking of Jerusalem, He exclaims “how often have I wanted together your children as a hen gathers her brood under her wings—and you would not!” This rather striking image of Jesus as a hen, protecting her brood from the fox, sacrificing herself, if need be, speaks to something deeply instinctive within us: the desire to be sheltered in a loving embrace, and to know that we are truly safe and deeply loved. If the image of a hen doesn’t quite resonate with you, think of a mother nursing her newborn baby, protecting her in the warmth of her embrace. That desire to be with her child, that indescribable love, that unconditional love, which extends from the core of the mother’s being. Loving her child more than life itself is as natural for her as breathing or drinking. She delights in her child, and would do absolutely anything to protect her, giving her own life in a heartbeat. That is a hint of how great God’s love for us is; yet, sadly the response by humanity has often been to reject God’s call to love one another as He has loved us. END_OF_DOCUMENT_TOKEN_TO_BE_REPLACED

Christianity is so much more than you think 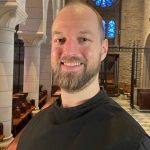 In my mid-twenties, I considered myself a lapsed Roman Catholic who was spiritual, yet not religious. I loved Jesus Christ – I mean, a cross hung above my bed – but if you were to call me a Christian, I would cringe in disgust. If you are either a lapsed Christian, or someone who identifies as spiritual-not-religious, you may know exactly what I mean.

Yet after a long and tumultuous ten-year journey, I now proudly call myself a Christian. The name of “Christian,” however, has a profoundly different meaning for me now than it once did; so much so that I am now a novice in an Episcopal monastery.

The critiques against Christians as a group are certainly warranted. In my perception, there are a whole lot of “wolves-in-sheep’s-clothing” out there. We live in a culture where the Bible, and even the name of Jesus Christ himself, is shamelessly used as a mere prop by self-serving charlatans and politicians, who cherry-pick scripture out of context for their own nefarious ends. There is admittedly a huge disconnect between Christianity as it often appears in the world and the true teachings of Christ. However, we need to look a little deeper to see that the true message of Christ is still spreading in the hearts of humble believers all over the world – yet sadly, it rarely makes the headlines.

To mistake cultural Christianity — which can appear more like a nationalistic identity than a religion — for authentic Christian community is a common misconception. Tradition teaches us that the Christian Church is not merely an institution, but is the mystical Body of Christ. St. Paul writes, “For just as the body is one and has many members, and all the members of the body, though many, are one body, so it is with Christ. For in the one Spirit we were all baptized into one body — Jews or Greeks, slaves or free — and we were all made to drink of one Spirit” (1 Corinthians 12:12-13). The profound failings of the Christian Church to emulate the teachings of its exemplar throughout history are profound, to say the least. Yet, the core of Christianity is not “institution”; the core of Christianity is Jesus Christ.

In the Gospel according to John, Jesus prays to God before he is to be crucified, saying, “Holy Father, protect them in your name that you have given me, so that they may be one, as we are one” (John 17:11). Christianity is a religion that affirms our profound unity as a human family and the radical equality of all people. Theologian Richard Rohr asserts that the forgotten reality of the Incarnation “has the potential to reground Christianity as a natural religion and not one simply based on a special revelation, available only to a few lucky enlightened people.” He reminds the reader that “the essential function of religion is to radically connect us with everything (Re-ligio = to re-ligament or reconnect). It is to help us see the world and ourselves in wholeness, and not just in parts.” For this we need one another. As one of my Brothers here at the Monastery likes to say, “salvation isn’t a solo activity.”

During my time here at SSJE, I have become increasingly aware of how interconnected our lives are and how, as human beings, we are deeply dependent on one another for support and encouragement along the spiritual path. In Christian community, with Jesus as our guide, we should help each other navigate the winding moral caverns of human life, in all its frailty and messiness. This is a true function of a religious community.

For me, being part of a church congregation was my first step in slowly realizing that I had gotten the religion of my birth all wrong. Before, when I’d looked in from outside the Church, all I could see was how so many people who called themselves Christians were doing it wrong. Once I actually engaged with them, in community, I discovered the most amazingly loving people, who showed me that there is no one right way to be a Christian. In fact, even making mistakes is a part of the growing edge for those walking the Christian path together. There are many Christians who are anything but stuffy and repressed. On the contrary, I’ve met some of the most open, most compassionate people through the Church. Having a shared theological framework to express my inner experience of God has been invaluable to the growth of my identity in Christ. This is something that I did not experience in my previous spiritual communities and meditation groups. Former Archbishop of Canterbury Michael Ramsey wrote that the praying Christian is part of “the people of God in all places and all ages. Divisions of place and time, of culture and of our unhappy separations may hinder but do not destroy the unity in Christ of those who know their prayer to be in Christ.”

The Christian Church is far from perfect. However, Christians are an incredible group of people to wrestle alongside and to grow with as we tackle all the complexity of life together. If you’re waiting for a time when Christianity is going to meet a high expectation for how a religion should be, you may be waiting for the return of Christ. Please don’t mistake my invitation as some self-righteous claim of moral authority: the last thing the world needs is someone telling others that their faith or their spiritual seeking is invalid. The Church is the mystical Body of Christ, and Christ encompasses all of humanity, his sacred and beloved children. Where, when, and how you worship God is not the point, in my mind. But, I have come to realize that we need one another in our pilgrimage. The words of St. John in his first Epistle are as relevant today as they were when he wrote them:

“Dear friends, let us love one another, for love comes from God. Everyone who loves has been born of God and knows God. Whoever does not love does not know God, because God is love. This is how God showed his love among us: He sent his one and only Son into the world that we might live through him. This is love: not that we loved God, but that he loved us and sent his Son as an atoning sacrifice for our sins. Dear friends, since God so loved us, we also ought to love one another. No one has ever seen God; but if we love one another, God lives in us and his love is made complete in us. This is how we know that we live in him and he in us: He has given us of his Spirit.” (1 John 4:7-13)

When we stand in the mess of life with others, acting in love for the sake of Christ, we can get a taste of the divine life now — on earth as in heaven.