One of the three monastic vows, celibacy can be a confusing subject. While few are called to practice Christian celibacy, it can offer meaning, clarity, and encouragement to all. Br. Lucas Hall invites us to discover in the witness of celibacy the invitation to surrender ourselves in trust, wholly and joyfully, to God's love.

Click on the tabs below to explore the topic of celibacy through Lucas' reflection, suggested practices, reflection questions, and further resources. Click here to read and download a print-friendly version of this offering >

Br. Lucas Hall, SSJE arrived at the monastery in 2017, and made his initial profession of vows in 2019. Born in 1992, he spent his childhood in the suburbs of Cincinnati, Ohio, and studied political science and comparative religion at Miami University. He enjoys writing, woodworking, and cooking. 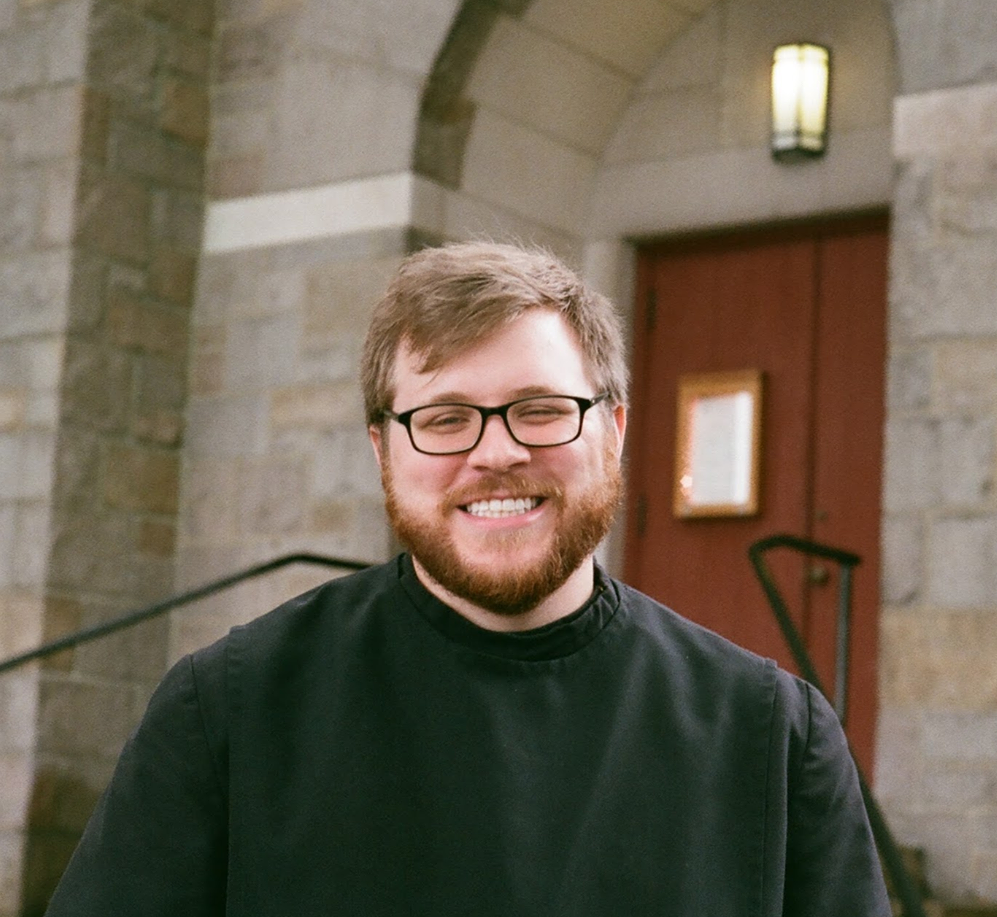 trusting in the love of God

Celibacy can be a confusing subject. It comes wrapped in obscurity and confusion, perhaps because it touches on the subject of sexuality, a topic many feel uncomfortable discussing. But people experience sexuality, and the Christian witness to this has always included a space for celibacy. While often seen as punitive repression, celibacy is truly an affirmation of trust in the love of God, and an encouragement to all people to trust this love.

The witness of Christian celibacy calls the Church and the world to recognize the importance and holiness of the human body. John’s Gospel proclaims that “the Word became flesh and lived among us.”1 Jesus experienced embodied existence, including sexuality. He even entered scenarios and interactions that Jews and Gentiles both would have recognized as erotically-charged, from his encounter with the Samaritan woman at the well2 to his reclining with the Beloved Disciple at the Last Supper.3 Christ used this embodied experience to point always to God and to the love of God. His celibacy does not amount to a shunning of bodies and sexualities, but rather reveals the capacity of our yearnings to be holy, lifted into the loving gaze of God, and satisfied in our eternal union with Christ the Bridegroom. Christians walking in this path of celibacy follow in those footsteps, and point the same way.

It is impossible to speak meaningfully about sexuality without mentioning sex and gender, and Christian celibacy has offerings on this subject too. Celibacy stands against twisted social norms where a man’s masculinity and worth are dependent on sexual power and domination. The monastic tradition affirms that the power of God is perfected in what the world scorns.4 In a culture where men feel increasingly friendless and alone, celibate communities offer a counter-cultural vision of trust, authenticity, and vulnerability that stems from the persistent love of deep friendship. The witness of celibacy offers a space where women can trust that they are not the objects of sexual pursuit. Women can also look with pride to the authority and wisdom on display by female monastic leaders in the past and present, as Christian celibate communities have allowed women to demonstrate their gifts in an otherwise male-dominated Church and world.5 Christian celibacy also has much to offer anyone who feels outside of the mainstream sexual and gender categories of the dominant culture. Christ himself spoke of celibates as “eunuchs for the sake of the kingdom of heaven,”6 placing Christian celibacy in a tradition of transcending established gender norms and boundaries. In the mystical theology so closely associated with celibate monastics, we see great flowing freedom in the perspectives and imagery of sexuality. Christ himself was sometimes called a eunuch in recognition of his own celibacy.

Most people are not called to be celibate. But Christian celibacy can offer meaning, clarity, and encouragement to others. Celibacy explicitly dignifies the lives of single people, proclaiming that one may be whole and worthy of respect, dignity, and community without being in a romantic relationship. The world in general, and the Church in particular, are prone to ignore and degrade single people as basically incomplete, worthy of consideration primarily in an attempt to “correct the error” of a person’s singleness. The deliberate lifelong commitment to singleness involved in the vow of celibacy stands starkly against this tendency toward isolation and condescension. On the other hand, the vow of celibacy also can encourage those who are called to marriage. Both marriage and celibacy ask us to surrender to the risk and challenge of commitment; both are lifelong recognitions of the Christian truth that we are not our own, that we belong to another.7 In both vocations, Christians are called to engage with their human capacity for erotic love in a way that reveals, day-by-day, the abiding love of God.

In the embrace of our sexuality, we often find the most poignant experience of beauty. To behold something or someone beautiful is to experience a deep stirring; it is disarming and vulnerable. We can simultaneously feel joy and fear as we witness the arresting power of that which is beautiful. Christian Scripture and tradition affirm that the beauty of all created things and beings should point us to the infinitely greater beauty of the Creator, and they position God as a craftsman, bringing the world into being through wise and artful skill.8 The celibate life might at first seem like a rejection of sensuality and beauty; in fact, the vocation of Christian celibates is rather to attune themselves, body, soul, and spirit, to the presence of God’s beauty in all things. By joining Jesus in the asceticism of celibacy, the celibate Christian grows in the knowledge of God’s omnipresence, trusting in the reality of divine beauty even in the barren starkness of the desert. We learn deeply the truth that Christ came into the world in humility, with “no form or majesty that we should look at him; nothing in his appearance that we should desire him.”9 This can serve as a witness to the whole Church, encouraging Christians to look beyond outward appearance. In this, we can more fully live the call to recognize the beauty of the face of Jesus in all people.

Celibacy is not a common vocation, and it can be a difficult one to understand. But Christian celibacy should be understood as a devotion to God’s love. In the Incarnation, Jesus has hallowed our bodies, our sexualities, our senses, and our desires, offering in himself a way for everything to be lifted up into the eternal love of God. The witness of Christian celibacy is to trust in this joyful promise, and to proclaim that joy to all.

…the Lord does not see as mortals see; they look on the outward appearance, but the Lord looks on the heart.

The soul is Your bride, the body Your bridal chamber,
Your guests are the senses and the thoughts.
And if a single body is a wedding feast for You,
how great is Your banquet for the whole Church!

Yet dearly I love you, and would be lov'd fain,
But am betroth'd unto your enemy;
Divorce me, untie or break that knot again,
Take me to you, imprison me, for I,
Except you enthrall me, never shall be free,
Nor ever chaste, except you ravish me.

Faith is the highest passion in a human being. …But anyone who comes to faith won’t remain at a standstill there. Indeed, he would be shocked if anyone said this to him. Just as the lover would be indignant if someone said he had come to a standstill in his love, for he would reply, “I’m by no means standing still in my love, for I have my life in it."

At the Crucifixion, Jesus gave his body to us and for us, naked and vulnerable. Find a crucifix, an icon, or some other image of Christ on the cross. Choose one that is beautiful to you. With your mind and heart, using sight and touch, study this depiction of Christ’s body. Search for your own experience—of self and others—in the imagery. Bring these reflections to Jesus in your prayer.

When praying alone, focus on movement and touch. Position your body differently. Touch and move various body parts, especially the places on your body that feel vulnerable, uncomfortable, or neglected. Dress differently from how you might normally be dressed in prayer. Be deliberate about your engagement with your body, and about the intent of this engagement to encounter God.

From time to time, take stock of your own erotic life. Don’t leap to condemnation or praise; simply be frank and honest, trusting that God knows you and loves you. Whatever your sexual life looks like, ask how it’s pointing yourself and others to Christ. Is it balanced and committed? Is it authentic and intimate? Is it loving and freeing? Is it prayerful? It might be helpful to engage in this with the aid of a spiritual director, confessor, or someone in a similar role, but in all cases, treat this more as a prayerful self-revealing than a clinical analysis.

Why did God give us eroticism? Why have we been made, in our anatomy and physiology, in our feelings and thoughts, to be sexual beings? How does your particular experience in this compare with that of others? Have you experienced ways that these realities bring us back to God?

What do you find beautiful? How might you distinguish something beautiful from something superficially pretty or attractive? Where in your life might there be beauty that’s unexpected or difficult to see?

In John’s Gospel, Jesus repeatedly asks those around them what and whom they are looking for. At SSJE, in each stage of transition on the way toward life vows, a man is asked what he desires. What are you looking for? What do you desire? Can you bring your seeking and yearning to God? How might Christ respond to your answers?

Explore these additional resources on celibacy from the Brothers:

A PRAYER FOR CELIBACY

Holy God, you alone are the full joy of our hearts and the endless satisfaction of our desires: Help us to attune ourselves to your love, clothing our bodies in holiness, consecrating our relationships to the showing forth of your being, and living in the full faith of your eternal presence; through the one who has put on our flesh, the firstborn of all Creation, Jesus Christ. Amen.

A nugget of wisdom from the monastic tradition, illustrated with suggested spiritual practices to try today, reflection questions, and further resources.