Humility has gotten bad press in the modern era. Too often, it has been associated with passivity, weakness, complacency, low self-esteem, or an unquestioning submission to authority. But true humility, as Jesus taught and modeled it, maintains a healthy balance between a proper self-esteem and an honest awareness and acceptance of our limitations, weaknesses, and faults. Br. David Vryhof explores this virtue that is at the heart of the monastic tradition, one which can help us to see the truth about ourselves and everyone else.

Click on the tabs below to explore the topic of humility through David's reflection, suggested practices, reflection questions, and further resources. Click here to read and download a print-friendly version of this offering >

Br. David Vryhof, SSJE lives at Emery House in West Newbury and serves as the Communications Brother. He loves that his day is grounded in the Daily Office (while his actual office is grounded in plenty of post-it notes and to-do lists). He is the most enthusiastic sports fan in the community.

Read about David's vocation journey to the Monastery. 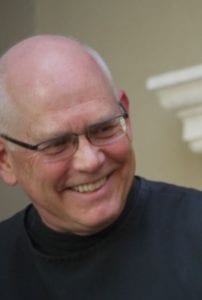 embracing the truth that leads to freedom

Humility as a virtue and a way of life has been highly-prized and much sought-after in Christianity. Both the Old and New Testaments praise it; Jesus models it, teaches it, and urges his disciples to seek it; and St Paul frequently commends it to the early Christian communities. Humility has been especially valued in the Christian monastic tradition: monastic writers have seen it as a necessary condition for a right relationship with God and with others.

But the virtue of humility has gotten ‘bad press’ in the modern era. Too often it has been associated with passivity, complacency, and unquestioning submission to those in authority. When we think of humility, we are likely to conjure up images of persons with low self-esteem; people with fawning, weak personalities; or people who are afraid to assert themselves. Modern Western culture is rightly suspicious of that kind of ‘humility’ because it denies our intrinsic worth as human beings.

But true humility, as Jesus taught and modeled it, is something other than the distorted image of humility that has been scorned in modern times. True humility maintains a healthy balance between a proper self-esteem – based on the knowledge that we are beloved children of God who are made in God’s own image – and an honest awareness and acceptance of our limitations, weaknesses and faults. Authentic humility encourages us to take our rightful place in relationship to God our Creator, to our fellow creatures, and to the earth on which we all live. Authentic humility, because it is grounded in truth, will lead us to freedom: “The truth shall set you free” (Jn 8:32). Jesus is prepared to teach us this humility: “Learn from me,” he says, “for I am gentle and humble in heart, and you will find rest for your souls” (Mt 11:29).

What can we learn about humility from Jesus? Consider the humility with which he came to us, how he “emptied himself, taking the form of a slave, being born in human likeness. And being found in human form, he humbled himself and became obedient to the point of death…” (Phil 2:7-8). Consider his words and his example: “Whoever becomes humble like this child is the greatest in the kingdom of heaven” (Mt 18:4); “When you are invited (to a banquet), go and sit down at the lowest place…” (Lk 14:7-11); “If I, your Lord and Teacher, have washed your feet, you also ought to wash one another’s feet. For I have set you an example…” (Jn 13:1-17).

“The humility of Jesus,” writes John Mugabgab, editor of Weavings magazine, “is far from resigned submission to an imposed authority. He is humble in his heart, the core of his being, and his humility is a free offering of himself to the One he lovingly calls ‘Abba.’”

The desert fathers and mothers of the 4th and 5th centuries valued humility above all other virtues. Humility was a way of finding one’s place in right relation to God and neighbor, without being swayed by the need for attention or praise or honor or power. Humility was necessary to attain purity of heart, which alone enables one to see God (Mt 5:8).

Furthermore, it was also the only thing that could defeat the forces of evil. St Anthony of Egypt said, “I saw the enemy spread out over the world and I said, groaning, ‘What can get through such snares?’ Then I heard a voice saying to me, ‘Humility.’”

For those in the desert tradition, humility meant having a right opinion of oneself before God and living peacefully and gently with others. Its two chief characteristics were a willingness to learn from others, especially those of low estate, and a refusal to judge others. Abba Poemen once said to Abba Joseph, “Tell me how to become a monk.” He said, “If you want to find rest below, and hereafter, in all circumstances, say ‘Who am I?’ and do not judge anyone.”

For Christian monastics, the key to humility was (and is) the recognition of our indebtedness to God in all things. Even when we recognize that we are making progress in the life of virtue, we are not to credit ourselves or our own efforts, but God alone. One of the early desert fathers, John Cassian, writes, “…we shall be able to avoid the snares of this most wicked spirit (i.e. pride) if, in the case of each virtue where we have felt that we have made progress, we shall speak the words of the Apostle (Paul): ‘Not I, but the grace of God within me.’ And ‘by the grace of God I am what I am…’ For ‘every good gift and every perfect benefit is from above, coming down from the Father of lights.’ ‘For what do you have that you have not received?’”

“Humility is the constant forgetfulness of one’s achievements,” wrote St John Climacus a century later. It is the opposite of pride and self-aggrandizement. Humility is shown in loving God above all else, in the willingness to submit to another’s wisdom, in an acceptance (without shame) of our fragility, in our cooperation with others, in learning to listen rather than to speak, in treating others with gentleness and respect. Humility holds these two truths in balance: (1) I am a child of God, made in the image of God, and therefore worthy of dignity and honor, and (2) I am a human being, like every other human being, with weaknesses, limitations and faults. At times I will need to be reminded of the first truth; at other times, of the second. Humility lives in the balance, in the truth that each of us is both good and evil, strong and weak. From this balanced perspective we see the truth about ourselves and about everyone else.

“The sure road that leads to God is first humility, next humility, and lastly humility. Ask me the question as often as you may, my answer will always be the same. There are other precepts in God’s law, but unless humility precede and follow our good works and also accompany them…unless we hold fast to it and repress pride and all vain self-conceit, our good deeds will be snatched out of our hands… Pride lurks even in our good actions and must be guarded against lest it rob us of our merit.” – Augustine of Hippo (354-430)

“A humble man is not disturbed by praise. Since he is no longer concerned with himself, and since he knows where the good that is in him comes from, he does not refuse praise, because it belongs to the God he loves, and in receiving it he keeps nothing for himself, but gives it all, with great joy, to his God.” – Thomas Merton (1915-1968)

“If I accept myself as ordinary, weak, frail, in other words, totally human and totally dependent upon God, then I am stripped of any sense of being in some way set apart, different, superior. It is then that the genuine, real self may begin to emerge.” – Esther deWaal

How does genuine humility differ from the false humility that can find nothing within itself that is worthy of praise?

Bernard of Clairvaux, The Steps of Humility and Pride (Trappist, KY: Cistercian Publications, 1973).

Explore these additional resources on humility from the Brothers:

A PRAYER FOR HUMILITY

Heavenly Father, give us the humility that realizes its ignorance, admits its mistakes, recognizes its need, welcomes advice, accepts rebuke. Help us always to praise rather than to criticize, to sympathize rather than to discourage, to build rather than to destroy, and to think of people at their best rather than at their worst. This we ask for your Name’s sake. Amen.

A nugget of wisdom from the monastic tradition, illustrated with suggested spiritual practices to try today, reflection questions, and further resources.