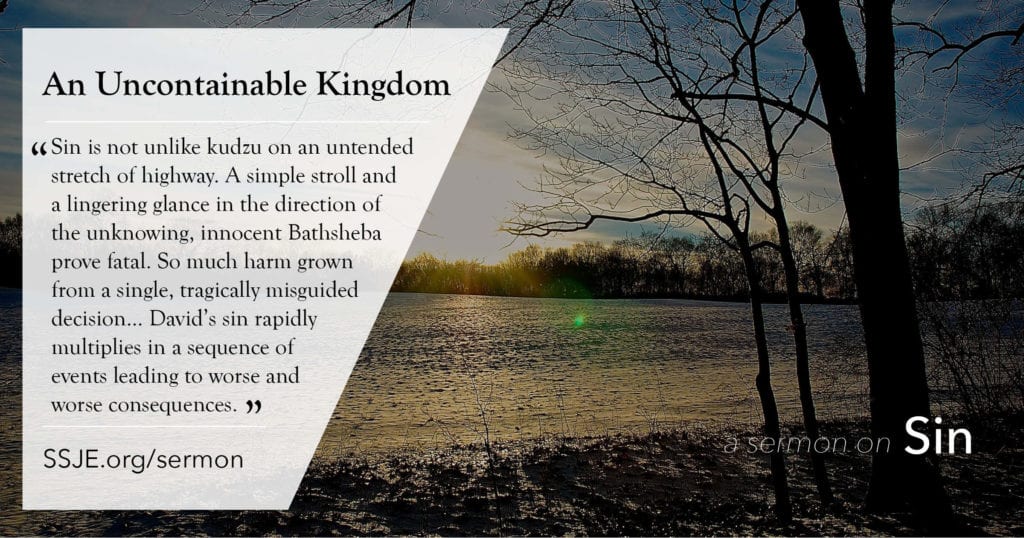 I am haunted by a vivid memory: a lush, green vine consuming a tractor, an abandoned car, a telephone pole, and even a small house. The vine is kudzu, a species innocently introduced to the southern U.S. in the late 1800’s from Japan. Now known as “the vine that ate the south,” kudzu is an aggressively invasive species, often growing a foot in a single day. My vivid memory stems from seeing this vine for the first time at age nine, when my family relocated to Alabama from New Jersey. On one stretch of highway, I gawked at the shape of a tractor, an abandoned car, a telephone pole, and then a small house clearly visible beneath the lush foliage. I silently wondered if our new house would eventually suffer the same fate.

Sin is not unlike kudzu on an untended stretch of highway. In the second book of Samuel, we encounter a passage that is notoriously timeless in its relevance. A simple stroll and a lingering glance in the direction of the unknowing, innocent Bathsheba prove fatal. So much harm grown from a single, tragically misguided decision, to act on his tempting thoughts in flagrant abuse of his power as king. David’s sin rapidly multiplies in a sequence of events leading to worse and worse consequences. An innocent woman’s life is changed forever, and a good man is put to death by the king whose interests he was fighting to defend.