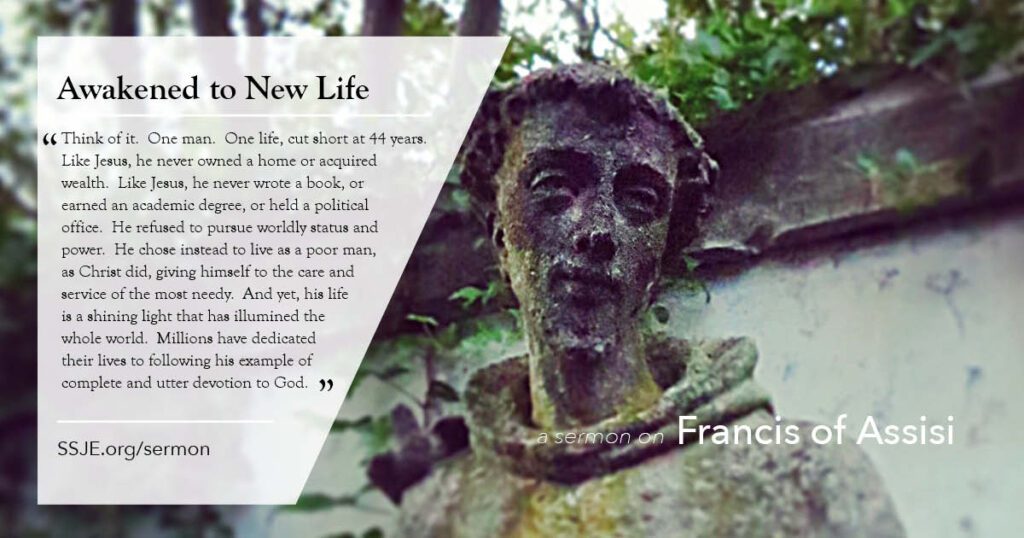 You may have noticed upon entering the chapel this morning that the liturgical color is white rather than green, which it would normally be during this season of the Church’s year.  It is white because we are observing the Feast of St Francis of Assisi, the little poor man (Il Poverello) who has long been recognized as one of the most beloved saints of all time.  His actual feast day is October 4, but we have transferred the feast to today to bring to a close our month-long observance of the Season of Creation, during which we have celebrated and prayed for the earth and its creatures.

I have twice had the good fortune of visiting the town of Assisi, which rests on a hilltop in the breathtakingly-beautiful central region of Italy called Umbria.  Assisi is, of course, the birthplace of St Francis, and of the religious order he founded, the Order of Friars Minor (OFM).  During my visits to Assisi, my favorite pastime has been to sit in the small chapel in the undercroft of the great Franciscan basilica, where the body of St Francis and four of his early companions are buried, to witness the silent, steady stream of admirers and devotees from all over the world, as they approached his tomb to offer their prayers and to pay their respects.  I have literally spent hours there, wondering, as I looked on, how one man, one life, could have had such an enormous impact on the world and could have influenced for good millions upon millions of lives. END_OF_DOCUMENT_TOKEN_TO_BE_REPLACED