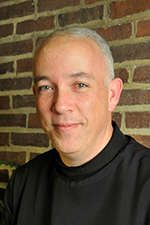 As you can tell from the name of our Society, we brothers have a special affinity to the beloved disciple which tradition suggests is John.  There is an icon in the statio that you pass on your way into the cloister that contains the tender image of the beloved disciple reclining on the breast of Jesus.  He was closest to Jesus in his inner circle of friends.  But if truth be told, most days I identify more with Peter.  You may remember in Matthew’s gospel that Simon is renamed by Jesus and given the name Peter which means rock, “and on this rock,” Jesus tells him, “I will build my church, and the gates of Hades will not prevail against it.”[i]

But it is not this aspect of Peter that I identify with.  It is because more often than not gets it wrong.  Peter is constantly saying the wrong things and sticking his foot in his mouth.  It is Peter who steps outside the boat to walk with Jesus on the water but is overcome by his fear and begins to sink.[ii]  It is Peter who denies Jesus three times before the cock crows after his insistence that he would never leave Jesus.[iii]  The many stories we hear about Peter suggests that he does not have all the information he needs and often acts or speaks out of ignorance.  END_OF_DOCUMENT_TOKEN_TO_BE_REPLACED

I wonder how many billions of people have been comforted by these “Comfortable Words”, as they have sometimes been called.  And I wonder if it’s this very passage that St. Augustine had in mind when he said that our hearts are restless until they rest in God.

Posted in Sermon and tagged Beloved Disciple, Matthew 11:28-30, The Bosom of God, The One who Is
Leave a comment

What we have just heard, which reverberates so mysteriously in our hearts, is often called the Prologue of John’s Gospel–the very first 18 verses.  It is a brief, but majestic overture to the magnificent Fourth Gospel, laying out the themes of God, creation, life, light, grace, truth, humanity, Jesus.  The Prologue is striking in its cosmic sweep, gathering up, well, everything: all things came into being through him.  This Prologue is about everything that is, and how all things came to be. END_OF_DOCUMENT_TOKEN_TO_BE_REPLACED

The beloved disciple reclining next to the heart of Jesus is the icon of our relationship with God. From this image we begin to grasp the nearness of God to us, the intimacy he shares with us, and the extent in which God cares for us. As foundational as this belief may be, however, if you are anything like me, you need constant reminders, as apparently the early Christian communities did as well. There is this reminder in the first epistle of John: “We declare to you what was from the beginning, what we have heard, what we have seen with our eyes, what we have touched with our hands, concerning the word of life — that God is light and in him there is no darkness at all.”