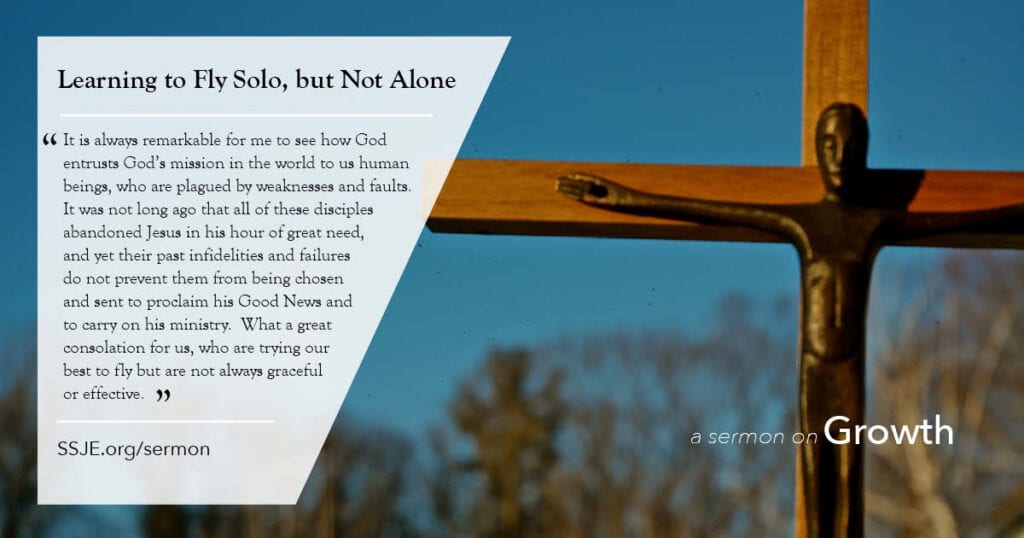 This spring we’ve watched as a pair of morning doves built a nest on the outdoor crucifix located in our cloister garden.  Nestled on the shoulder of the crucified Jesus, the mother sat motionless on her eggs for days and days.  At last the chicks emerged.

I had the extraordinary good fortune to be watching the nest this past Monday evening.  The two chicks are now adolescents, about 2/3 the size of their adult parents and darker in coloring.  They were sitting side by side in the nest, eagerly looking out on the world.  Their mother appeared and, standing on the head of the crucified Jesus, she fed them.  Then she flew off and perched nearby where she could keep a close eye on them.

You could tell there was something happening.  The young birds began rocking back and forth in the nest, as if working up their courage to leave the warmth and security of the nest.  Finally, one of them took the leap.  It flapped wildly around the cloister, unable to control its flight, banging into the walls and ceiling until it finally fell stunned to the floor.  The second one readied itself for its first flight, rocking in the nest before finally launching its body into the air.  Like the first, it flapped wildly about, crashing into the ceiling and walls, and then landing on the floor.  It waited for a bit, then took off again, this time successfully navigating its way through the arches and out into the garden. END_OF_DOCUMENT_TOKEN_TO_BE_REPLACED