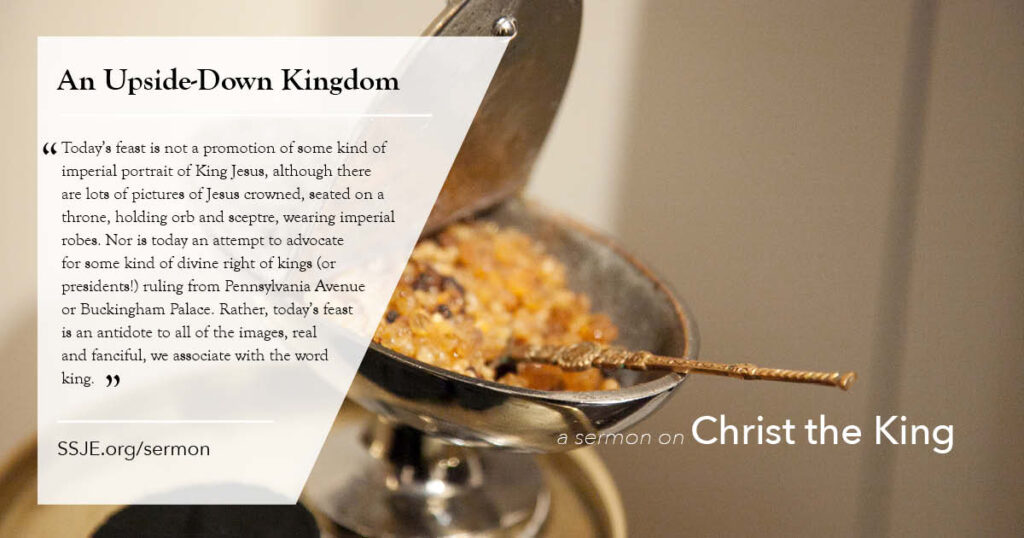 I must confess that I find this feast, or at least the title of this feast, problematic. What are we to make, living as we do in a republic, with something call the Feast of Christ the King? In Canada, which is in fact a constitutional monarchy, and not a republic, this Sunday is now known as The Reign of Christ. Yet even there, images of royalty, inherited privilege, power, and immense wealth, raises hackles. At the same time, we see in the news how prime ministers are becoming more presidential, and presidents more imperial, as political power and authority become more localized and focused in one person, or office. It doesn’t help that the tabloids rely on people’s appetites for embarrassing tell all tales of the rich and privileged to maximize sales. All of this makes a feast dedicated to the kingship of anything, a complex and complicated proposition. Maybe it’s time simply to reclaim the Prayer Book tradition and refer to this Sunday as The Last Sunday after Pentecost, or The Sunday Next Before Advent, which is what we called it when I was growing up.

However, having said that, today’s feast is not a promotion of some kind of imperial portrait of King Jesus, although there are lots of pictures of Jesus crowned, seated on a throne, holding orb and sceptre, wearing imperial robes. Nor is today an attempt to advocate for some kind of divine right of kings (or presidents!) ruling from Pennsylvania Avenue or Buckingham Palace. Rather, today’s feast is an antidote to all of the images, real and fanciful, we associate with the word king. It is an antidote to King Anyone because the world has in fact never seen, except once, the kind of king we mean, when we speak of Christ the King. END_OF_DOCUMENT_TOKEN_TO_BE_REPLACED 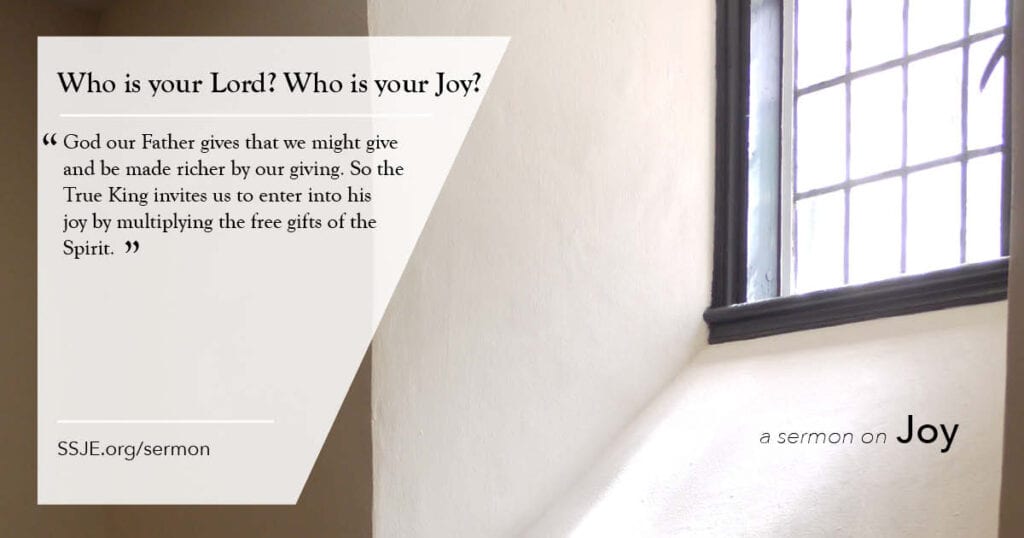 Enter into the joy of your master.

This solitary phrase from twenty-fifth chapter of Matthew’s gospel has rung like a bell through my praying imagination this week. As he discloses what we commonly call “The Parable of the Talents,” this phrase rings twice from the lips of Matthew’s Jesus. Enter into the joy of your master.[1] Most of us know the well-established reading of this parable.

It goes something like this: A wealthy man goes on a journey, leaving his wealth in the hands of three slaves. Each responds to the responsibility in one of two ways. One we might call a wise stewardship that produces more of what has been given. The other, a refusal to wisely use the gifts so graciously given, leading to waste and suffering. Traditionally read, this parable speaks an urgent call to responsible stewardship of all God gives to us that we might be invited to enter into the joy of our master. END_OF_DOCUMENT_TOKEN_TO_BE_REPLACED 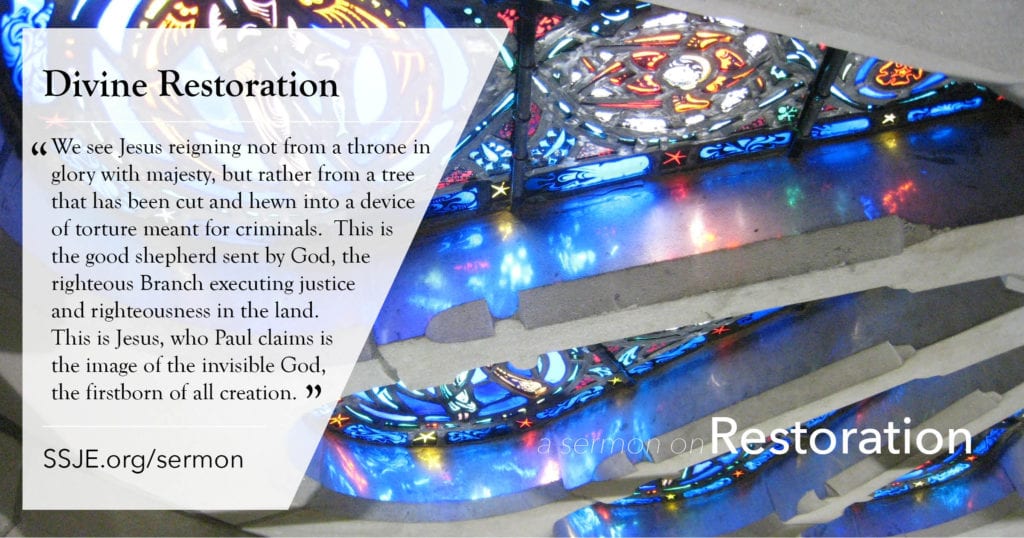 Today in the calendar of the church we celebrate the solemn feast known as Christ the King.  Normally positioned on the last Sunday after Pentecost before the start of the season of Advent, we pray these words:  Almighty and everlasting God, whose will it is to restore all things in your well-beloved Son, the King of kings and Lord of lords: Mercifully grant that the peoples of the earth, divided and enslaved by sin, may be freed and brought together under his most gracious rule.  This prayer seems appropriate seeing that our popular culture reflects a renewed interest in all things ‘royal.’  Not only have we watched with fascination two royal weddings in recent years (the most recent of which our own presiding bishop Michael Curry gained notoriety as a preacher on the world stage), but shows like ‘Downton Abbey,’ ‘The Crown,’ and the newly released Netflix production ‘The King,’ based loosely on William Shakespeare’s Henriad, have captured our imaginations as to what aristocracy and royalty look like.  If you have not seen “The King,” I will not spoil it for you, but I dare say it will not disappoint, containing drama, adventure, action (including a portrayal of the famous Battle of Agincourt), as well as an eyebrow-raising twist at the very end that will leave you wondering what might happen next in the life of this young king who endeavors to save the realm from the chaos he inherited from his recently deceased, war-hungry father Henry the Fourth.

Images of royalty reflect, I think, the high ideal of order, unity, and goodness that we all desire and hope for in our lives, especially amidst so much that is chaotic, scattered, and untrue in our world.  This monastery church certainly draws on the human imagination of what the heavenly realm might look like.  The Revelation to John from the canon of scripture contains probably the most vivid descriptions of heaven and where we connect to what is referenced in our Collect: They will make war on the Lamb, and the Lamb will conquer them, for he is Lord of lords and King of kings, and those with him are called and chosen and faithful.’ [i] The Rose Window at the back of the church, what stained glass artisan Dr. Charles Connick called “a playground for the afternoon sun,” represents a vision of God’s heavenly realm.  The central medallion shows the Blessed Virgin Mary being crowned as the Queen of Heaven by her son, Christ the King;[ii] and I will come back to that.

END_OF_DOCUMENT_TOKEN_TO_BE_REPLACED 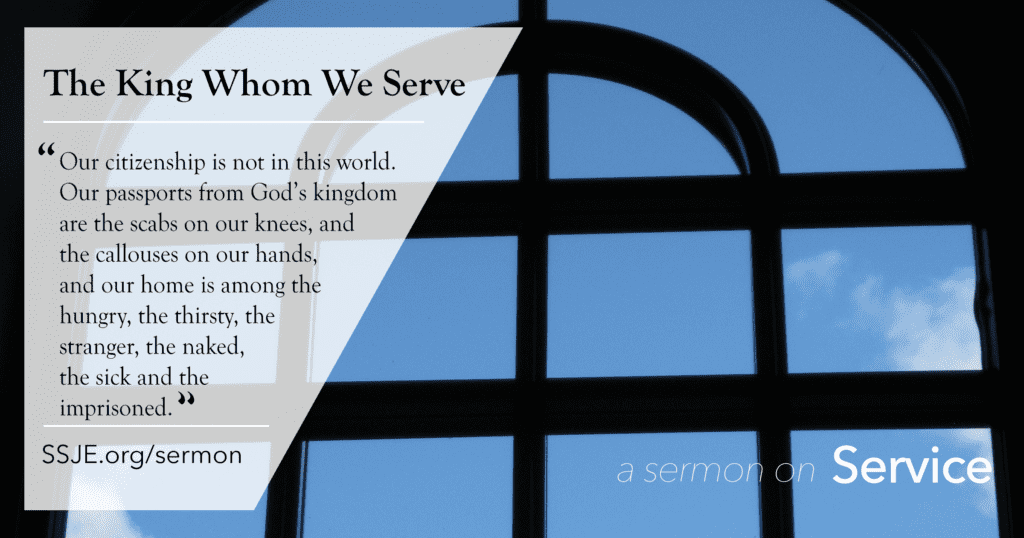 We all know that a shift has taken place in the world, and we see it most clearly in last year’s election in this country and the BREXIT referendum in the UK. The shift appears to be away from a global, universal outlook to a more individual, nationalist one. Me First appears to be the watchword, and that has become true about nations as well as individuals. We see this in foreign as well as domestic policy, ranging from trade, to immigration, to security, to health, to education, to gun laws, to the environment, to civil and human rights. We see this as society becomes more stratified and neighbourhoods and communities more uniform. We are losing, or perhaps have lost, our concern for the other and appear to live in a culture that says that I can do whatever I want, and the other person, or neighbourhood, or nation, simply doesn’t matter. Some political commentators see evidence of this, not just at one end of the political spectrum, but at both ends. And some argue that this isn’t a recent phenomenon, but has its roots back several decades.

But this Me First attitude is in stark contrast to the kind of life we are trying to live as Christians, and as a Christian community. It is such a stark contrast, that I have spent some time pondering what it is that sets us apart from the world, and shapes our life as Christians in a fundamentally different way, so much so, that not only are we set apart from the world, sooner or later our values as Christians will set us in conflict with a world where a Me First attitude is king. And that, I think, is the key for us, at least for today: who or what is king over our lives? Who or what rules supreme in our lives? To whom or to what do we owe our ultimate allegiance? END_OF_DOCUMENT_TOKEN_TO_BE_REPLACED

Those of you who have been on retreat with me in the past, or heard me preach, especially at Emery House, will know that I frequently go back to the same starting point over and again. I often begin with what is my favourite collect, the collect for the Second Sunday after Christmas:

O God, who wonderfully created, and yet more wonderfully restored, the dignity of human nature: Grant that we may share the divine life of him who humbled himself to share our humanity, your Son Jesus Christ; who lives and reigns with you, in the unity of the Holy Spirit, one God, for ever and ever. Amen.[1] END_OF_DOCUMENT_TOKEN_TO_BE_REPLACED

But what kind of king is this, who was born in a stable, lain in a manger, worked in a carpentry shop, washed people’s feet and then died on a cross?  The Roman imperial authority, Pontius Pilate, would have entered Jerusalem in great pomp and display of military power, entering from the west, having come up from King Herod’s lavish port city of Caesarea, most likely riding a magnificent horse.The King of Kings came up from the east, through the barren splendor of the Judean desert and up and over the Mount of Olives—riding a donkey. END_OF_DOCUMENT_TOKEN_TO_BE_REPLACED