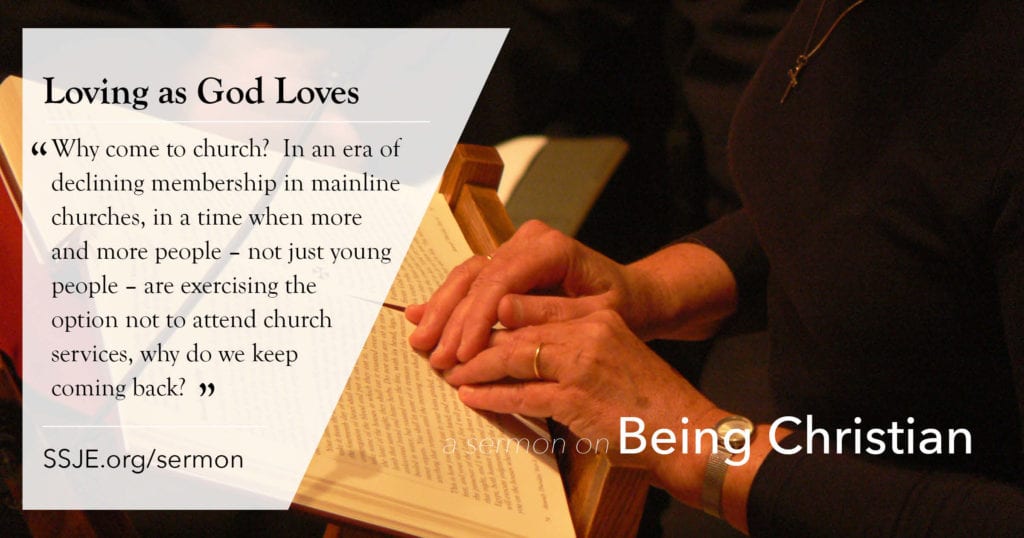 Why come to church?  In an era of declining membership in mainline churches, in a time when more and more people – not justyoungpeople – are exercising the option not to attend church services, why do we keep coming back?  What is it that we realize that we need, and that compels us to return to this place day after day, week after week?

There are many possible answers, and no doubt we would find a wide range of reasons if we polled the congregation today.  Most of us would say we come first of all to worship and to give thanks to God.  We realize that life is a gift – all of it –and we wantand needto return thanks to the Giver of all that we have received.  Many of us would say we come to be fed by Word and Sacrament, to be nourished and strengthened by the holy gifts of Bread and Wine for the service we feel called to give in the world.  Others of us come for community, to join together with people who have made a commitment to belonging to God and to following Christ.  We take seriously the call to join ourselves to the Body of Christ, and we find strength in solidarity with others in this place.  But here is another important reason why we come to church: We come because we realize that living as a Christian in the world is counter-cultural, and we need frequently to be remindedof that, instructedin that, and encouragedin that.  When we realize that God asks us to live in ways that are often out of step with the culture that surrounds us, that God invites us to embrace and embody a different set of principles and values than the world promotes, namely the values of the kingdom of God, then we understand how much we need the support of others as we make this difficult and sometimes perilous journey upstream. 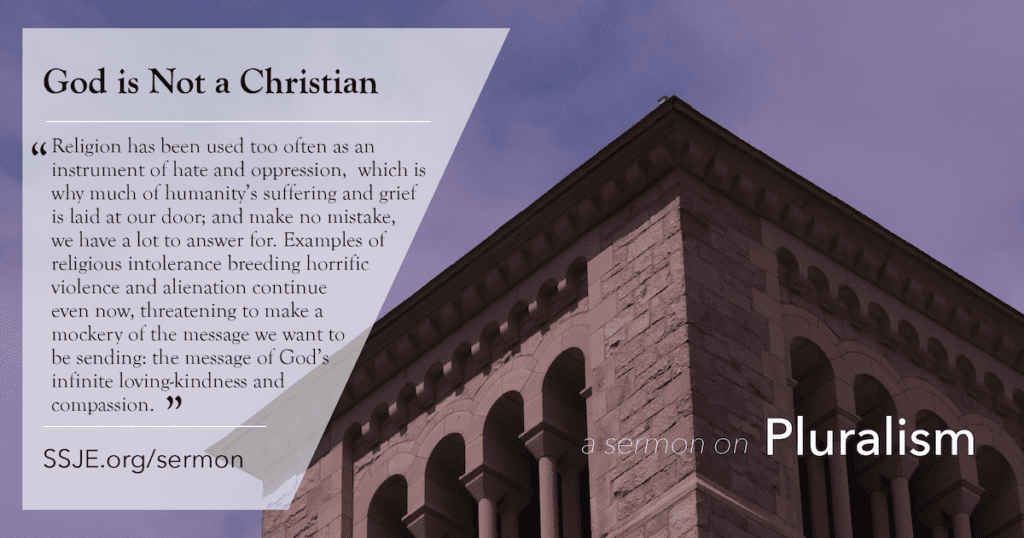 I found inspiration recently, in of all things, The Edicts of Ashoka, ancient inscriptions written by Emperor Ashoka of India in the third century before the common era. They represent some of the oldest examples we have of what today we might call interfaith dialogue. For the most part, Emperor Ashoka is waxing eloquent on a newly arrived faith tradition called “Buddhism.” However, he also spends some time speaking about other religious traditions. Here’s some of what he wrote:

With these words, Emperor Ashoka provides one of our first references to religious pluralism, suggesting a relationship beyond peaceful coexistence, towards finding essential wisdom in traditions not one’s own, and perhaps finding an underlying truth common to all traditions. Whatever his precise intention, the relationship between diverse faith traditions and their various truth claims has remained an important issue throughout our history. END_OF_DOCUMENT_TOKEN_TO_BE_REPLACED

Today we celebrate the Confession of St. Peter.  They’re at Caesarea Philippi, a beautiful, rugged place of streams and waterfalls north of the Galilee in the Golan Heights, an area of Syria now controlled by Israel.  The splendid Roman city is gone; the many temples and shrines to pagan gods built into the face of a great rock cliff are gone—a couple of small niches remain.  It was perhaps directly facing these shrines with their statues that Jesus may have said something like, “That is Pan and that is Aphrodite.  But who do you say that I am?” “You are the Anointed, the Messiah, the Christ; the Son of the living God.”  You are Son of the living God, not a god carved in stone—says Peter.  The shrines and temples were built on the face of the rock cliff; the church would be built on the faith of a human “rock”, that is, Petros, Peter—as Simon came to be known. END_OF_DOCUMENT_TOKEN_TO_BE_REPLACED