In the year 2006, author John Koenig began a writing project based on his observation that there were no words to describe certain common existential feelings and emotions. These holes in the language inspired him to research etymologies, prefixes, suffixes and root words which resulted in a weblog of neologisms and their definitions (a neologism being a newly coined word or expression that has not quite found its way into common use).  John defines the word lutalica as: the part of your identity that doesn’t fit into categories. Koenig posits that when we are born, we immediately get labeled, categorized, and put into box for the convenience of never having to go to the trouble of looking inside. In this way, we lose a sense of who we are and begin searching elsewhere for our identity. In regards to this dissonance, he writes: “We all want to belong to something. But part of you is still rattling around inside these categories and labels that could never do you justice.”[i]

In our reading from the Letter of James, the author has given us an admonition about distinctions. It is not about the eradication of distinctions. Distinction in the basic sense is simply the quality or state of being distinguishable. If we take a good look at the world around us we can see the rich diversity of God’s creation, and we show forth that same diversity. In Genesis we read that on the sixth day of creation, God said, “Let us make humankind in our image, according to our likeness.” That word ‘our,’ points to the complex creation of a God whose very nature is diverse. END_OF_DOCUMENT_TOKEN_TO_BE_REPLACED

In our lection from Matthew this morning we observe something in Jesus that is rarely expressed in the gospels: we see a display of emotion.  Other instances include Jesus feeling compassion: as in the hungry crowds who endlessly follow or seek an audience with him.  Or in the case of the rich young ruler who when asking what he must do to inherit eternal life, the gospel of Mark says that Jesus loved him before telling him to go and sell all his goods then follow him.  With all the dinner invitations Jesus received, I am sure there had to be some merriment and laughter during his ministry and I wish we had a confirmation that Jesus did in fact share a good chuckle with his friends.  We know that in John’s gospel, Jesus wept in grief over the sadness surrounding the death of his friend, Lazarus.  Today, we hear that Jesus was amazed.  What is it exactly that could amaze the incarnation of God?

In this story we observe two men, from two cultures, sharing the same geography.  Both men are powerful; both men have authority; both men have a following.  From the outset, it may look as if the only thing different about them are how they look.  One man is a Roman centurion, an enforcer of the Roman occupation of Palestine, a Gentile dressed in the finest uniform of the Roman army which displays his elite social status.  The other man is an itinerant rabbi, a teacher and reformer, a Jew dressed in the clothes of nomad.  The one thing they have in common is humility.

Jesus has displayed his humility in the willingness to reach the most disenfranchised of his people.  In the reading just prior to our gospel this morning, we observe Jesus grant the request of a leper who asks to be made clean.  Lepers were outcasts of society due to the vileness of their disease which was highly contagious and for which there was no cure.  Jesus not only confronts the man who requests to be healed, but actually touches him in the process.  This alone would have made Jesus ‘unclean’ in the eyes of the temple leaders and unfit to enter the temple.  Yet Jesus heals him and tells him to go show himself to the temple leaders and to give his gift in thanksgiving END_OF_DOCUMENT_TOKEN_TO_BE_REPLACED 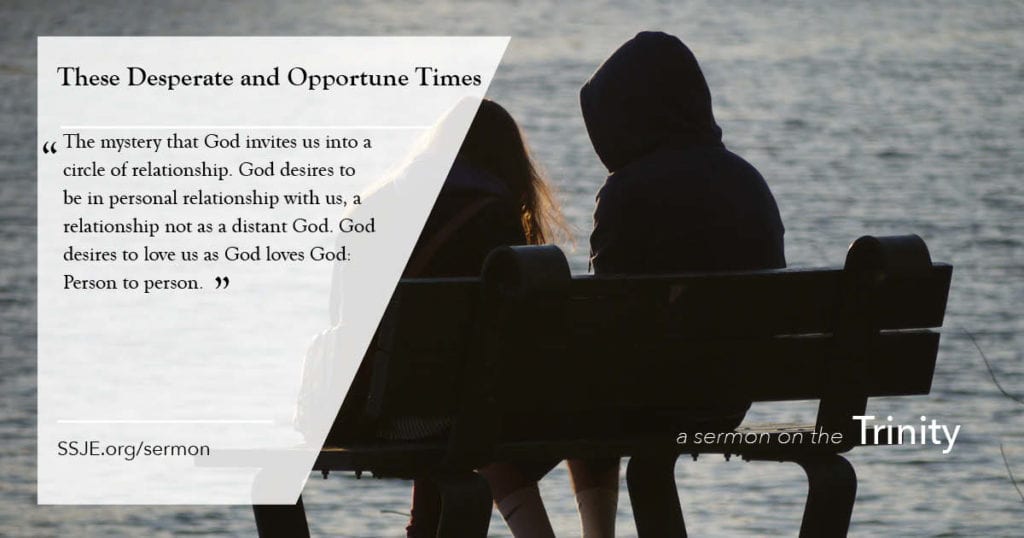 Saint Augustine, the African bishop and theologian of the early 5th century, spent many years writing about God as a Trinity of Persons, a mystery which both consumed his attention and yet eluded his understanding.[i] So the story goes, he was walking by the seaside one day, meditating on the Trinity, how God could be One essence, and yet, at the same time, three Persons. He came onto a little child. The child had dug a small hole in the sand, and with a seashell was scooping water from the ocean into the hole. Augustine watched him for a little while and finally asked the child what he was doing. The child answered that he wanted to scoop all the water from the sea and pour it into the hole in the sand. Augustine felt impelled to correct the child. “That is impossible,” Augustine said. “The sea is too large and the hole is too small.” And now it was this child who was impelled to correct Augustine. The child said, “That is true, but I will sooner draw all the water from the sea and empty it into this hole than you will succeed in penetrating the mystery of the Holy Trinity with your limited understanding.” Augustine turned away in amazement, and when he looked back, the child had disappeared. Augustine had been put in his place, not a bad place, but simply in a place of recognition that he, too, was a child of God, a God whom he would mysteriously experience but never fully understand. END_OF_DOCUMENT_TOKEN_TO_BE_REPLACED

These wise men who had come from the East, who are they?  The New Testament Greek name for them is “magoi” or, as we would say, “magi,” which means occult prac­tition­ers, fortune tellers, wizards, priestly augurs , and magicians.[i]  (The English word, “magician,” comes from the Greek, magi.)  The Greek name magi also includes astrologers , and so it’s no wonder that they reportedly saw a certain star rising, knew it was significant, and followed it.  What was this star?  There’s been endless speculation down through the centuries, some of it based on the Zodiac; some of it based on astronomy.  Maybe the star was a supernova, maybe a comet, maybe a “planetary conjunction” (some astronomers dating Jupiter and Saturn and Mars passing each other around the birth year of Jesus)?  The Gospel according to Matthew makes neither explanation nor apology for asserting that they followed a star. END_OF_DOCUMENT_TOKEN_TO_BE_REPLACED