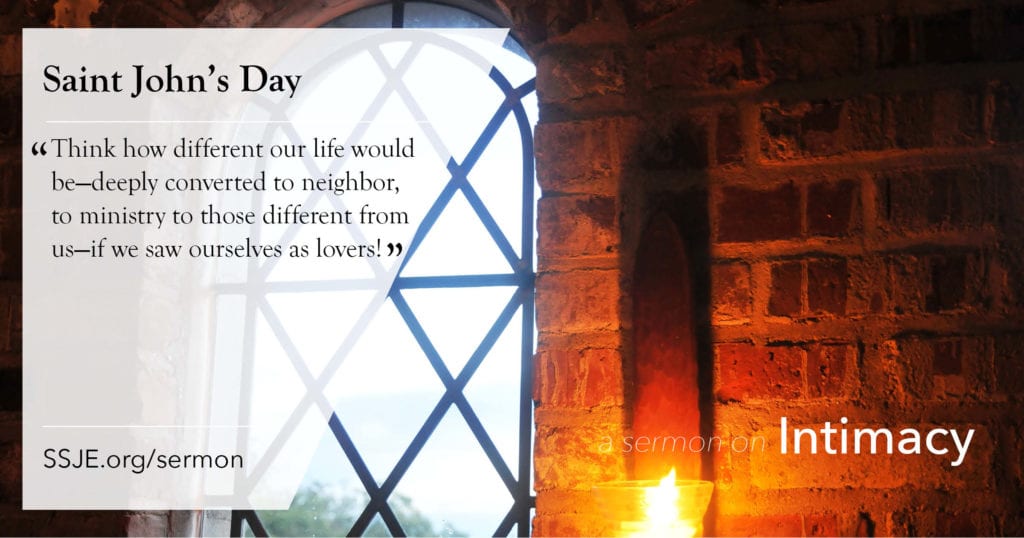 …the other disciple, who reached the tomb first, also went in, and he saw and believed… (John 20:8).

Once I got lost in the fog on the water. The more I paddled into this thick, eerie, pea-soup fog the more lost I felt. Fog was all around me. I didn’t know where I was. I was directionless. I was lost. I couldn’t get where I wanted. My fear was heightened because one of our children, then young, was with me. Eventually, I could see the outline of some unfamiliar land, but land it was. Then came the welcome sound of hammering, a lobsterman working on his boat. I paddled near him and asked. “Where am I?” It was an anxious question. He told me where I was and how to get where I needed to be. Then, like a good teacher, he asked, “Where’s your compass?” When I got back home from vacation, I knew I was lost in more ways than just on the water. So I wrote about the Fellowship of Saint John because I needed a compass. I’ve been grateful to the Brothers ever since.

“Where am I?” “How can I get on course?” “Where’s my compass?” is another way to ask: “Who is God for me?” “How can I grasp the divine presence in my life?” “How can I feel what is alive and vibrant in me, again?” These, for me, are Easter’s questions.

To answer such questions, early and medieval teachers turned to that wonderfully erotic Hebrew love poem, the Song of Songs.[1]It’s not an obvious place to look. The Song suggests the human and divine in relationship are like lovers. Is that how you describe your relationship to God? Like you’re lovers. Hark! My beloved! Here he comes, bounding over the mountains, leaping over the hills. My beloved is like a gazelle or a young stag. There he stands outside our wall, peering in at the windows, gazing through the lattice. My beloved spoke, saying to me: “Rise up, my daring; my fair one, come away”(Song2:8-10). It’s an amazing sketch of human-divine-relationship. Do you experience God as your lover? Or is that just a stretch too far? For me, Saint John’s Day is about the intimacy of God.

The rabbis interpreted the poem symbolically. The symbolic interpretation of scripture is, after all, an old way to read sacred texts, not a ruse foisted on the modern Christian world by Anglican liberals. How else might we read Scripture than as an attempt to articulate a reality that’s clearly beyond us? How can we talk about the ineffable, the mysterious, the Unknowable except in figures and enigmas?

Bernard <of Clairvaux> was convinced that the Song of Songs’ central theme—the passions and love play of the wedding night—provides the best analogy for describing the human encounter with the divine. The claim is breathtaking. We today use the term ‘mystical marriage’ without thinking about how astonishing it is to claim that God and a human being can so unite as to be ‘married’… The secret of mystical marriage is the discovery that to be oneself is to be in love with Love… …this meant that God is love in the absolute sense—that love is God’s being, God’s substance. And because God is Love itself and because we as creatures are made in God’s image and likeness, we are by nature lovers. There is nothing more natural to us than loving…[2]

So we hear about the race to the tomb. The other disciple, the one Jesus loved, is faster than slow-footed Peter. The beloved disciple believes because he sees. So we say, “Seeing is believing.” But what did the beloved disciple see? “…the linen wrappings lying there, and the cloth that had been on Jesus’ head, not lying with the linen wrappings but rolled up in a place by itself.” The face-cloth is what we call a “handkerchief.” Sandra Schneidersthinks: “The face veil is best understood as a Johannine…sign (symbol) in and through which a…person can encounter the glory of God revealed in Jesus.”[3]The beloved disciple comes to faith by sight. “The priority of love is the basis of spiritual insight.”

I am moved by what the writer Herta Muellersays about a handkerchief:[4]

DO YOU HAVE A HANDKERCHIEF was the question my mother asked me every morning, standing by the gate of our house, before I went out onto the street. I didn’t have a handkerchief. And because I didn’t, I would go back inside and get one. I never had a handkerchief because I would always wait for her question. The handkerchief was proof that my mother was looking after me in the morning. For the rest of the day I was on my own. The question DO YOU HAVE A HANDKERCHIEF was an indirect display of affection. Anything more direct would have been embarrassing and not something the farmers practiced. Love disguised itself as a question. That was the only way it could be spoken:  matter-of-factly, in the tone of a command, or the deft maneuvers used for work. The brusqueness of the voice even emphasized the tenderness. Every morning I went to the gate once without a handkerchief and a second time with a handkerchief. Only then would I go out onto the street, as if having the handkerchief meant having my mother there, too.

I suspect that it brought to mind for John—the one Jesus loved, the beloved disciple—the intimacy of relationship. The intimacy of God with human beings. So we prayed today: “Eternal Father, whose Son Jesus drew the Beloved Disciple into deep intimacy with himself… Grant that we…may ever be Christ’s friends and witnesses, that through us…many may come to believe…”

Prayer is not just a good feeling in the heart but about growth, change and transformation when we can be open, vulnerable and real. Can we pray our way through our own fragility, stay in that vulnerable place and feel God’s unconditional love? Can we allow ourselves to be changed by our prayer, to leave self behind, to see God in all things, to trust and love another, to cross boundaries and transcend limitations? Because it’s all about love. Think how different our life would be—deeply converted to neighbor, to ministry to those different from us—if we saw ourselves as lovers!

We cannot love God unless we love each other. We know God in the breaking of bread, and we are not alone anymore.  Heaven is a banquet, and life is too—even with a crust—as long as there is companionship. We have all known loneliness. We have learned that the only solution is love. And love comes with community.’

…and he saw and believed…

[4]Herta Mueller, “Every word knows something of a vicious circle,” Nobel Lecture, December 7, 2009

As Director of the Fellowship of Saint John, over the years I have received – from committed members of the FSJ and from probationers trying the rule – a request to temporarily suspend their participation in the Fellowship. Most often the reason given is a perceived inability to “keep up” with their personal version of a rule of life. In the past, I’ve been inclined to accept this view without argument. But more recently I’ve tended to push back. Here’s my reason why.

In the gospels, Jesus is criticized for failing to “Keep the Sabbath day holy,” both for his acts of healing and for his disciples’ “work” on the Sabbath in plucking grain to eat. Jesus answers his critics by stating that God’s loving desire to help and heal all creatures overrides a rigid interpretation of the written law. Jesus teaches that the Sabbath observance is a gift of God: the Sabbath was created to serve humanity, not humanity to serve the Sabbath.

Similarly, I’ve come to believe that keeping a personal rule of life is to be seen as a gift of God, a way for becoming fully alive in Christ. By means of our baptism into Christ’s continuous dying and rising, we participate in God’s own life as members of a beloved and redeemed community. Thus the FSJ rule is not a task by which to achieve some self-styled perfection, but an invitation to companionship with God, the SSJE Brothers, and other members. The moment when we’re feeling least able to “keep” our personal rule on our own is the very time to breathe deeply of God and ask for help to creatively, lovingly adapt the rule to our present circumstances.

I wonder if there might be readers of Cowley who have delayed or denied themselves the chance to become members of the Fellowship for similar reasons, out of a sense that they were not somehow, or in some way, “enough” just at this moment: not committed enough, not prepared enough, and so on. If so, I would encourage you: Consider whether becoming a member of the Fellowship might be, not a marker of your arrival at some destination, but a way of a joining companions on the journey. We truly are joined to the Fellowship, even when – and perhaps especially when – during difficult times and fear of failure, we gratefully accept it as Christ’s gift for us.

To learn more or apply to become a member of the FSJ, visit www.SSJE.org/fsj

In the name of God, Father, Son and Holy Spirit. Amen.

Thank you Brother Geoffrey, and all Brothers of this Society, for the kind invitation to preach here on this special occasion. I am honored to do so.

In 1950, the English novelist Dame Rose Macaulay, then living in London, received an airmail letter from one John Hamilton Cowper Johnson of
980 Memorial Drive, Cambridge, Massachusetts, better known as Father Johnson of SSJE. Father Johnson had known Rose Macaulay slightly when he had been at St Edward’s House in Westminster some 30 years earlier. He was writing now because he had enjoyed her most recent novel. (It’s nice to think that monks, too, write fan letters!) Macaulay replied, and so began a correspondence that lasted for eight years, until her death. (1) END_OF_DOCUMENT_TOKEN_TO_BE_REPLACED

Friends, I cannot tell you what a loving privilege it is to stand here on this very special occasion with representatives of all those who love and support this community, which is so precious to us.

Holy Week always begins with an entry back into the place of worship.  When we gathered at Canterbury Cathedral—not in the Cathedral but in the Chapter House, as a sign of reentering our holy place of worship—I was encouraged and really thrilled by the news from Br. Geoffrey, that you would be re-entering this holy place in a very real way after so many months of (shall we not call it exile but) dislocation.  I know this is only a beginning, but it feels a very joyful beginning. And you were in my mind and heart throughout Holy Week. END_OF_DOCUMENT_TOKEN_TO_BE_REPLACED

It is a good thing to give thanks to the Lord, to sing praises to your name, O Most High;
to tell of your loving kindness early in the morning, and of your faithfulness in the night season.

The righteous shall flourish like a palm tree, and shall spread abroad like a cedar of Lebanon.
Those who are planted in the house of the Lord shall flourish in the courts of our God.

They shall bear fruit in old age; they shall be green and succulent,
that they may show how upright the Lord is; my rock, in whom there is no fault.