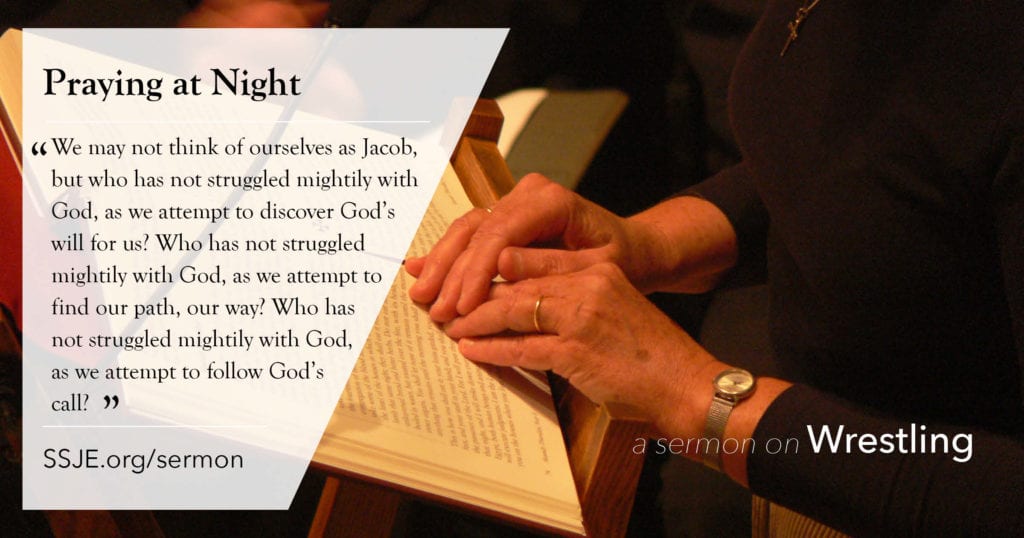 It was the winter term of Grade 9, and for gym class we were being taught some of the finer points of wrestling. As I am sure you can imagine, even though I had the weight, I didn’t have the strength, the aptitude, the dexterity, or more importantly the interest, to make a wrestler. But none the less, day after day, I would be assigned a partner, and within seconds, I would be flat on the mat with my opponent once again triumphant. I don’t think I ever lasted more than a few seconds, and I am sure that I never once prevailed.

With my dismal wrestling record, I can’t really imagine what it would be like to be so evenly matched, that you could actually wrestle all through the night, before one or other prevailed, yet this is exactly what happened that night with Jacob.

The same night he got up and took his two wives, his two maids, and his eleven children, and crossed the ford of the Jabbok. He took them and sent them across the stream, and likewise everything that he had. Jacob was left alone; and a man wrestled with him until daybreak.When the man saw that he did not prevail against Jacob, he struck him on the hip socket; and Jacob’s hip was put out of joint as he wrestled with him.[1]

It was only as dawn was breaking, that Jacob’s hip joint was thrown out, and the night time contest came to an end.

END_OF_DOCUMENT_TOKEN_TO_BE_REPLACED

In our first lesson, from the Book of Genesis, we hear about Jacob, who was a scoundrel and schemer.  His latest scam was to trick his father.  Jacob co-opts his father’s blessing intended for his older brother, Esau.

Where the story picks up in our Genesis reading, Jacob is traveling to meet up with his estranged and cheated brother, Esau, an encounter which Jacob would surely dread.  This difficult reunion is delayed because of a wrestling match Jacob undergoes in the middle of the night by the river Jabbok.  Who is this opponent?  Is it a demon or is it an angel, some emissary from God?  We can’t immediately tell.  These two beings fight with tremendous, even superhuman strength.  In Jacob’s case, it’s as if his life depends upon it… which it probably does.  Jacob’s thigh is thrown out of joint.  And this is very curious, because Jacob does not experience his wounding as being beaten but rather as being blessed.  Finally we get the picture that his accoster is not a thief-in-the-night nor a demon, but rather some angelic messenger who brings a severe mercy to Jacob: God’s blessing which has broken through to Jacob.  What do we make of this story?  Here’s two suggestions: END_OF_DOCUMENT_TOKEN_TO_BE_REPLACED

“Why do you think you have a vocation to be a priest?”  I was asked that many times, by bishops examiners, and ordination panels.  I would usually talk about my attraction to the work and ministry of a priest, and my sense that this is what God wanted me to do with my life.  I didn’t often describe what really prompted me to seek ordination.  I was reticent and a bit shy about describing that night, when I was in college.  It sounded just too dramatic and mystical – a bit embarrassing.  But that night I’ll never forget, I had a powerful experience of God calling me.  I was awake all night, struggling, saying – no, that’s not what I had in mind for my life.  At times I felt appalled, at other times unbelievably excited – this is the real thing: me and God.  By the morning I had said yes – and I got up, and went to tell my college chaplain that I wanted to be ordained.  I remember his words: “This made my day.” END_OF_DOCUMENT_TOKEN_TO_BE_REPLACED

Jacob was a rather shrewd scoundrel.  His latest coup was to trick his father.  Jacob knew it was the father’s prerogative and power to bestow a blessing upon his eldest son, such a blessing, highly significant and irrevocable.  By means of deception, Jacob himself co-opts the blessing intended for his brother, Esau.  Jacob receives the blessing, but it comes at a near-crippling cost because he does not have the stature to carry the blessing.
END_OF_DOCUMENT_TOKEN_TO_BE_REPLACED

The same night [Jacob] got up and took his two wives, his two maids, and his eleven children, and crossed the ford of the Jabbok. He took them and sent them across the stream, and likewise everything that he had. Jacob was left alone; and a man wrestled with him until daybreak. When the man saw that he did not prevail against Jacob, he struck him on the hip socket; and Jacob’s hip was put out of joint as he wrestled with him. END_OF_DOCUMENT_TOKEN_TO_BE_REPLACED

Posted in Sermon and tagged Genesis 32:22–32
Leave a comment

This story of Jacob’s encounter – the encounter with some force with whom Jacob wrestles into the night – is both surprising and also full of hope.  This is Jacob who, up to this point in his life, is notorious not because he is a virtuous man but because he is a rather shrewd scoundrel. END_OF_DOCUMENT_TOKEN_TO_BE_REPLACED