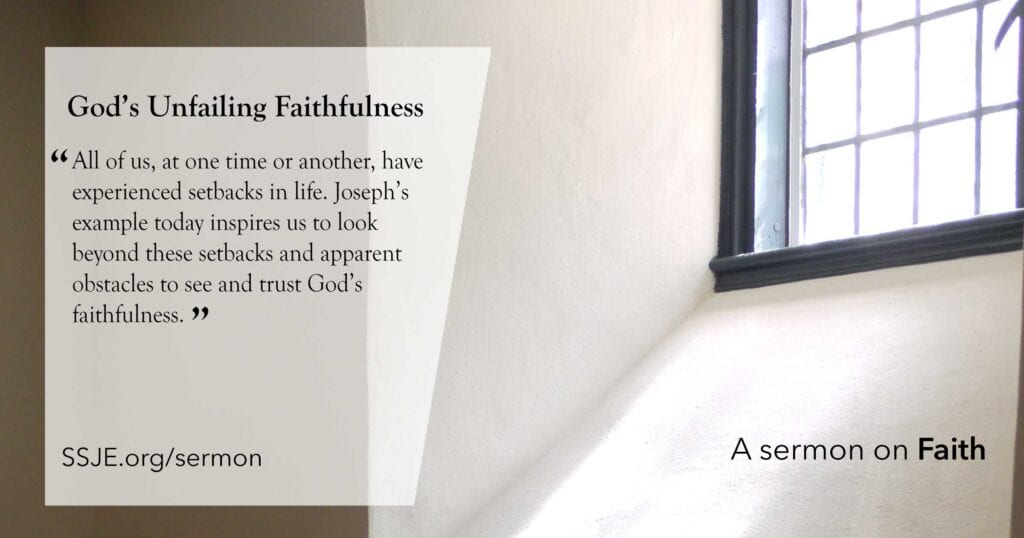 We would be hard pressed to find anyone in scripture who suffered more setbacks in life than Joseph. His brothers were jealous of him and, finding an opportunity to do away with him, sold him to slave traders who were passing through the land.  He was brought to Egypt and purchased by Potiphar, a wealthy and powerful Egyptian, who eventually recognized Joseph’s intelligence, honesty and hard work, and put him in charge of all that he had.  Potiphar’s wife tried to seduce him and, when he refused her, she accused him before her husband and he was imprisoned.  Even in prison his character and his deep insight continued to impress others.  He interpreted the dreams of Pharaoh’s servants and was promised freedom, but was then forgotten and left to languish in his prison cell.  Finally he got his opportunity, when Pharaoh himself had a troubling dream and Joseph was called to interpret it.  This he did, saving the land and its people from a deadly famine.  He rose in Pharaoh’s eyes and became a powerful ruler, second only to Pharaoh himself.

And then we read that his brothers, experiencing famine in their own land, came to Egypt seeking food.  Joseph recognizes them, but conceals his identity from them.  He sends them home with food, but arranges for his younger brother to be brought to him.  In the touching passage we read today, he finally breaks down and reveals his true identity to them.  “I am your brother Joseph, whom you sold into slavery,” he says; “And now do not be distressed, or angry with yourselves, because you sold me here; for God sent me before you to preserve life” (45:5). END_OF_DOCUMENT_TOKEN_TO_BE_REPLACED

This weekday homily was preached at Emery House.

Yesterday ’s O.T. reading introduced us to the saga of Joseph and his brothers in Egypt.  In today’s reading we come to the crucial moment of that story when Joseph “got back at his brothers” for selling him into slavery in Egypt.  In a touching few moments he revealed himself to his brothers and showed them how their meanness in selling him into slavery in Egypt was turned by the grace and mercy of God into a way of salvation for all of them. END_OF_DOCUMENT_TOKEN_TO_BE_REPLACED