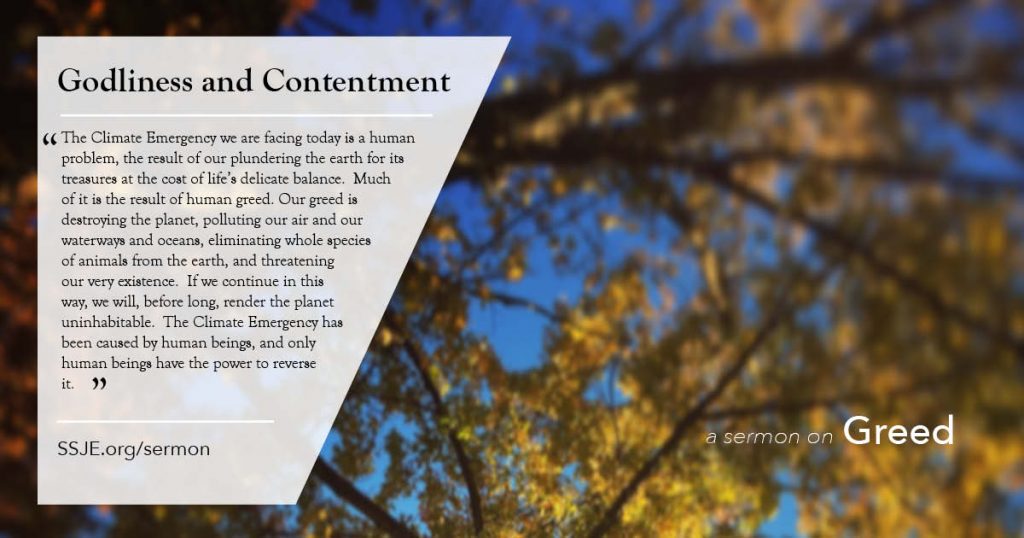 Money is not the problem.  Money is neutral in itself; it’s simply a means to facilitate commerce and trade in our daily lives.  Having money is also not the problem: there are many examples, particularly in the Hebrew Scriptures, of people who considered their wealth a gift from God, and used their wealth to help and benefit others.  It’s not money itself, but the love of money that poses a dangerous threat.

In his first letter to Timothy, Paul is criticizing a group of what he calls “false teachers” whose “love of money” taints and motivates their behavior and teaching. They are supposedly teaching the Christian faith, but they are doing so for their own personal gain.  They are more interested in profits than in people.

Lest his hearers fall into a similar trap, Paul outlines some of the dangers of an excessive love of money.  First, he says, we should recall that “we brought nothing into the world… and we can take nothing out of it.”  Our lives do not revolve around money or possessions or the status that they may bring us. END_OF_DOCUMENT_TOKEN_TO_BE_REPLACED

Jesus said to the disciples,“There was a rich man who had a manager, and charges were brought to him that this man was squandering his property… 29And I tell you, make friends for yourselves by means of dishonest wealth so that when it is gone, they may welcome you into the eternal homes…”  10 Luke 16:1-13

We could easily find this Gospel lesson appointed for today either confusing or offending.  It seems that Jesus is praising the practices of a dishonest account manager.  The manager falsifies the amounts owed to his employer so that when this manager is out of a job – mind you, he’s being fired because of his dishonesty! – these same creditors with whom he is currying illicit favor would admire him or owe him, and ultimately welcome him into their homes! END_OF_DOCUMENT_TOKEN_TO_BE_REPLACED