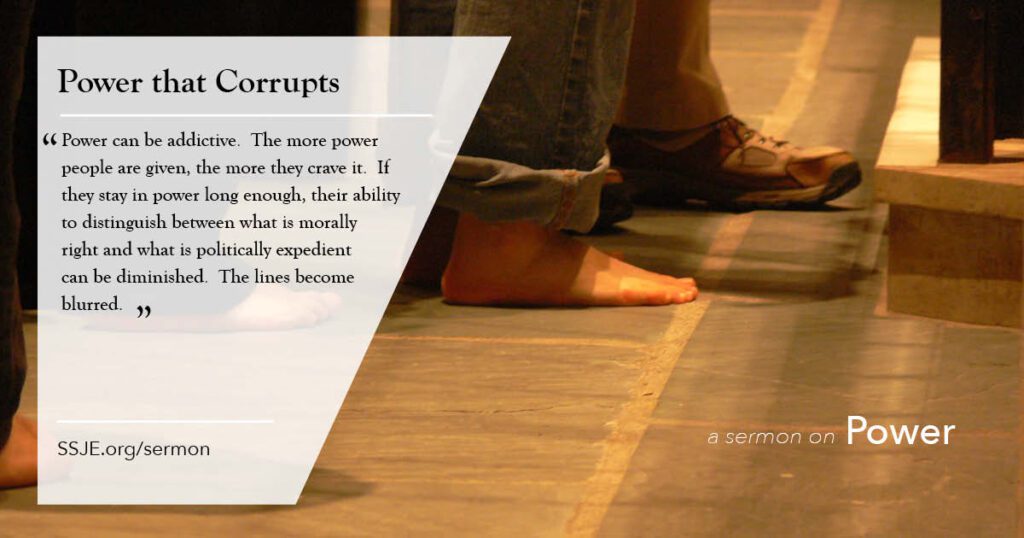 Perhaps you have heard the saying, “Power corrupts, and absolute power corrupts absolutely.”  These are the words of a famous 19th century English politician named Lord Acton, who was considered one of the most learned men of his time.

What Lord Acton was speaking about was the tendency of people who gain power over other people to succumb to moral weakness.  Such people not necessarily innately evil.  They may well begin as honest men and women whose motives are honorable and altruistic.  They may want to “do good” for their people.  But, over time, as they gain more power, as they experience its benefits, and as that power becomes more and more essential to their identity and self-esteem, the risk of corruption grows.  Many will fall prey to its seductive influence.  Their desire to maintain or increase their power will lead them to compromise their values and to sacrifice their integrity.  “Power corrupts, and absolute power corrupts absolutely.” “Despotic power,” Lord Acton warns, “is always accompanied by corruption of morality.” (italics mine).[i]

Power can be addictive.  The more power people are given, the more they crave it.  If they stay in power long enough, their ability to distinguish between what is morally right and what is politically expedient can be diminished.  The lines become blurred.  They do what benefits them politically, even if it means compromising their integrity and their moral standards.  They may lie or distort the truth to get and keep their power.  We don’t have to look far to find examples of this in our own political landscape. END_OF_DOCUMENT_TOKEN_TO_BE_REPLACED

What on earth could have prompted King Jereboam to erect two golden calves as objects of worship in the northern kingdom of Israel?  Surely neither he nor the people he ruled could have forgotten the thorough condemnation of a similar action taken by Aaron, the brother of Moses, at Mount Sinai centuries earlier during the flight from Egypt.  It seems an absurd decision; how could he have imagined that this would please the Lord?