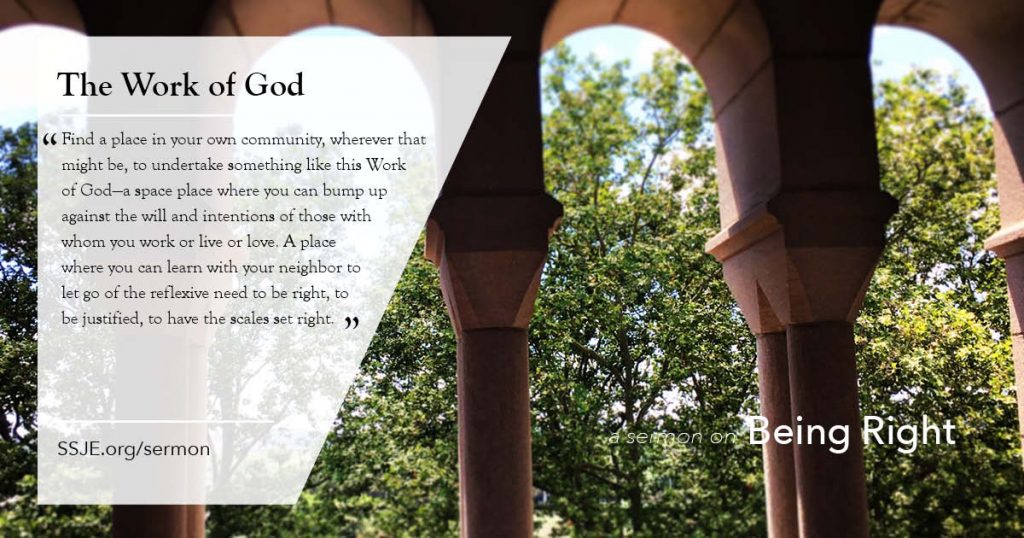 Today is one of those days where the compilers of the lectionary have, whether intentionally or not, paired together two passages from the New Testament that I find—because of their pairing— unexpectedly arresting.

At first glance, this pairing of epistle and gospel may strike us as a bit lopsided. We hear a dense admonition from St Paul, some of his harshest words, as he decries the inclination of the community at Corinth to pursue one another with lawsuits. In fact, to have lawsuits at all with one another is already a defeat for you. Why not rather be wronged? Why not rather be defrauded?

And then there is this bit from the Gospel According to Luke, a good seventy percent of which is but a list of names, names familiar to us now, names so familiar we might wonder what could possibly edifying about them. Now during those days he went out to the mountain to pray; and he spent the night in prayer to God. And when day came, he called his disciples and chose twelve of them, whom he also named apostles: Simon, Andrew, and James, and John, and Philip, and Bartholomew, and Matthew, and Thomas, and James son of Alphaeus, and Simon the Zealot, and Judas son of James, and Judas Iscariot, who became a traitor. END_OF_DOCUMENT_TOKEN_TO_BE_REPLACED

When I began studying our gospel lesson for this morning, the first thing I thought of was an event from this past week that made all the major newspapers and has been circulating as a video on social media.  The video is of Senator Elizabeth Warren confronting Wells Fargo CEO John Stumpf about taking responsibility for fraud committed by his company who then scapegoated lower level employees.[i] Senator Warren’s examination of Mr. Stumpf was scathing and I have to confess I took a slight sadistic pleasure in seeing him wide-eyed and squirming as she fired question after question, admitting damning evidence into public record from what seemed to be this great chasm separating the two.  After seeing the video, I couldn’t help but to think how lucky the rich man in our gospel lesson was to have had his interchange with Father Abraham instead of Senator Warren.  While Abraham’s interaction with the wealthy man is firm, his tone is at least compassionate.  To be honest, I think my curiosity was more the result of my recognition and identification with Mr. Stumpf.  Throughout my life, I have at times made poor choices based on selfish motives.  I too have had to face up to my shortcomings, ask forgiveness, and make reparations for harm caused to those whom I’d hurt.  Perhaps you can relate. END_OF_DOCUMENT_TOKEN_TO_BE_REPLACED