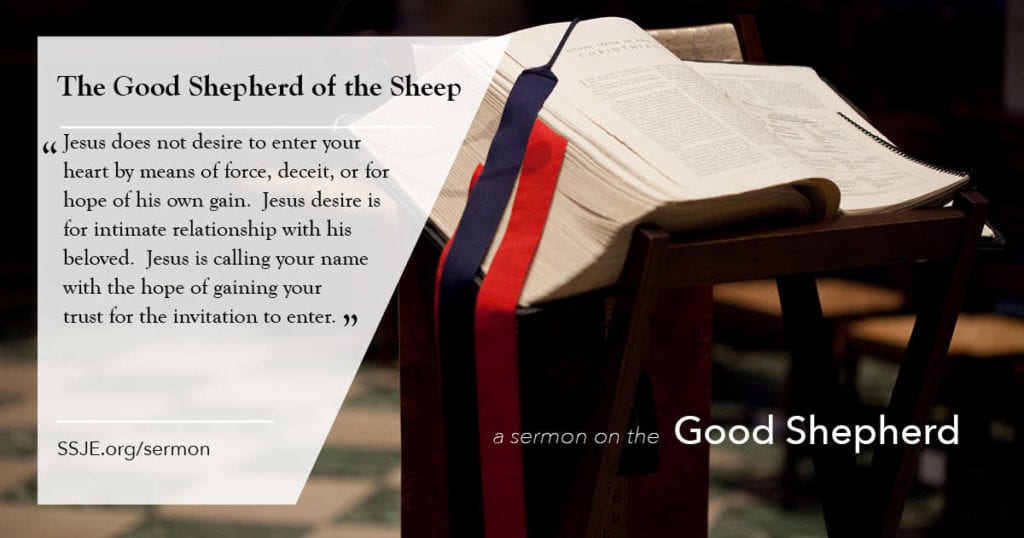 When I first began to pray with our Collect for this morning the phrase ‘good shepherd of your people’ caught my attention.  I began to think back throughout my life to people who had been shepherds to me, and thank goodness there have been many.  I recall the youth program at my elementary school that occurred every summer sponsored by our local Department of Parks and Recreation.  While parents were working, neighborhood kids could ride their bike up to the school where young adults employed by the Parks and Rec would be on hand to facilitate games, art, physical fitness, and field trips.  Being an only child experiencing the ups and downs of family life that was not always happy, I craved and needed special attention.  There were two or three young adults during those summers who recognized that need and would play board games with me when no one else showed any interest.  They shepherded me when I, in a way, was a lost sheep, bullied by other kids and isolated because I was not popular. When I received the attention I so desperately needed from these councilors I felt happy, content, and most importantly, safe.  Perhaps this is what inspired me to ask my parents one Christmas if I could have an older brother.  I wanted someone who cared for me, looked out for me, and who had walked the very path I had walked earlier in his life; someone who could guide, affirm, and encourage me when I felt especially alone and vulnerable.  I think this is as true for the 49-year old Jim as it was for the 9-year old Jim. END_OF_DOCUMENT_TOKEN_TO_BE_REPLACED

As incredible as it seems my four goslings had hatched on a Monday. They had been sexed, packed and shipped from Oklahoma before the end of that day, and there I was, picking them up in West Newbury on Wednesday. They came in a box about the size of a clementine orange box with a bit of straw and a heat pad. I put them in the car and drove them home, talking to them the whole way. When I got them home, I carefully opened the box and picked them up one at a time as I gave them something to drink. Having done that I was able to install them in their goose coop. END_OF_DOCUMENT_TOKEN_TO_BE_REPLACED

Preaching from the common lectionary, as we do here at the monastery, presents challenges.  One reason for this is that we often listen to texts read as though they stand alone.  When, in fact, they are often part of some larger narrative.  Often we are unaware of the context of a particular passage.

For instance, this morning we hear Jesus telling the Pharisees that anyone who enters the sheepfold except through the gate is a thief and bandit.  He’s not, at this point at least, calling himself the good shepherd.  That will come later.  For now, he calls himself the gate saying that “Whoever enters by [him] will be saved, and will come in and go out and find pasture.”1  Why does he say this and what does it mean?  In my reflections this morning on Jesus as the gate to greater life, I would like to take us back a couple of chapters in John’s gospel. END_OF_DOCUMENT_TOKEN_TO_BE_REPLACED

We continue on our journey this morning toward larger life. Which is what we’re calling this series of Easter sermons: “Toward Larger Life”.  Larger life is what the Good Shepherd is leading us toward: “I came that they may have life, and have it abundantly.”  He calls us by name and leads us out into larger life; we enter through the gate, which is Christ himself.  Though like lost sheep, he finds us and saves us from the thieves of our humanity. With rod and staff he leads us to the green pastures of larger life, abundant life, Resurrection life.

He does this primarily through love.  Love of God, love of neighbor, love of one’s own being opens us to that which is larger, that which is beyond the confines of our individual identities.  But because love of God and neighbor gets regular coverage in sermons, I’d like to speak to something else, to another way that God leads us toward larger life, toward abundant life, as today’s gospel puts it. END_OF_DOCUMENT_TOKEN_TO_BE_REPLACED