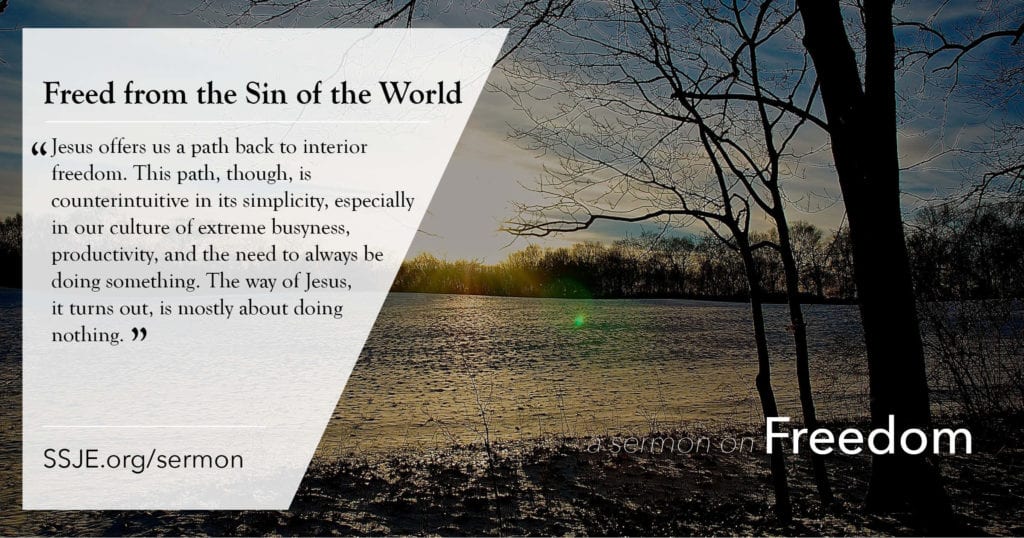 When we’re watching a good movie, and find ourselves swept along by the story, it’s easy to see the movie as having a reality of its own. We forget that what we’re actually seeing is only light dancing on a screen, and we relate intimately with the people and situations of the story as if they were real. We can even become so absorbed in the story that on some level we think we’re in the movie, like when something scary happens and we jump as if we’re in any real danger.

We can describe this shift in perception between what seems real and is real as a loss of a certain kind of freedom living within us. We move from being freely aware of light projected onto a screen to being caught in a misperception, no longer noticing the light or the screen, but only seeing the story as it unfolds. This loss of interior freedom is usually experienced as a fun kind of escapism, and it’s often just what we’re looking for when we need to unwind a little. We might even get annoyed if something gets in the way of that experience, like when filmmakers try showing movies at high frame rates, and people complain that the movie looks “too real.”

The ancient desert monastics had a lot to say on the subject of interior freedom, and the consequences of losing that freedom. They called this interior freedom apatheia, and it meant for them no less than abiding in the Kingdom of God, being free to love God with all one’s heart, and being free from the kind of suffering born from being a slave to sin. They described how this interior freedom allows us to see God’s Light and Truth in the world, as when Maximus the Confessor wrote: “Wisdom consists in seeing every object in accordance with its true nature, with perfect interior freedom.” Evagrius Ponticus turns our gaze inward to discover our true nature, writing: “If you wish to see the transparency of your own spirit you must rid yourself of all thoughts, and then you will see yourself looking like sapphire or the color of heaven. But to do that without interior freedom is not possible.”

John the Baptist saw Jesus this way, recognizing him as the one who would free us from the slavery of sin. And since Passover celebrated the delivery of the Jewish people out of slavery he thought of Jesus as the Passover Lamb, exclaiming here is “the Lamb of God who takes away the sin of the world!”

When we consider sin, what typically comes to mind are the actions we take, or even the thoughts we have, that are judged as immoral or unethical, or that violate some aspect of religious law. Sin can also refer to a state of being. When John says Jesus takes away the sin of the world, he intentionally uses the singular form of the word “sin,” referring to the condition of being a slave to sin, blinded by our own willfulness instead of willingly letting our eyes be opened to God’s Kingdom. In other words, this condition of sin is what the ancient monks would have described as the lack of interior freedom, and Jesus was offering a way back to this freedom.

John’s two disciples don’t seem to have recognized Jesus the way John did, but they did trust John, and so they followed Jesus. Gazing upon them from that place of interior freedom, Jesus felt moved to ask the two what they were seeking. They answered by asking where Jesus was staying, although a better translation of the original text would give the sense of abiding, as in “Teacher, where are you abiding?” Of course, Jesus was abiding in God’s Kingdom, and in what’s probably a reference to Jesus giving sight to the blind, he responds “come and see.”

Then we’re given what might seem like an odd detail. The disciples abided with Jesus at around four o’clock in the afternoon. In the Greek text, that line reads as “The hour was about the tenth,” with the dramatic emphasis landing on that final word. Many bible translators must have assumed we’d want to know what time of day that meant by our clocks, but keeping with the original text opens a richer layer of meaning.

The theologian Rudolf Bultmann, for example, suggested the tenth hour was symbolic of a coming to wholeness or fulfillment. St. Augustine saw the number ten in a similar way, while also recognizing it as a symbol of ancient Jewish Law. He understood the tenth-hour reference to mean that by abiding with Jesus, the Law had been fulfilled.

The Law had covered the moral and religious transgressions referred to as sins in the plural, while Jesus’ fulfillment of the Law amounted to addressing the underlying condition of sin. As the Passover Lamb of God he offered his disciples the way out of bondage, freeing them from that condition of sin. Interior slavery becomes interior freedom, and this fulfills the Law, because while abiding with Jesus in God’s Kingdom that long list of sins just doesn’t seem like much of a problem.

In chapter 8 of John’s gospel Jesus tells some of his Jewish followers that the truth would make them free. They respond indignantly saying they’ve never been slaves to anyone. And this was one of Jesus’ toughest jobs, convincing people who think they’re free that in truth they’re still enslaved.

Jesus responds to them saying “Very truly, I tell you, everyone who commits sin is a slave to sin. The slave does not have a permanent place in the household; the son has a place there forever. So if the Son makes you free, you will be free indeed.”

By “free indeed” Jesus means abiding with him in God’s Kingdom, that place of interior freedom from which we see God’s Truth clearly. We’re “free indeed” when we’re no longer enslaved to the sin mentioned in John the Baptist’s original proclamation. Jesus takes away sin, and it is the sin of the world. The world, or more specifically being attached or overly identified with the world, is the sin we’re freed from when we abide with God in Christ.

It may help in describing this interior freedom and the sin of the world to revisit the movie metaphor. Imagine you’re watching a movie and you become so completely caught up in it that you forget, on some level, that it’s only a movie. Your awareness shifts from watching light move across a screen to seeing only the story as it unfolds, a story that seems very real. The movie represents the world, and the enlightened screen represents the Truth of God’s Kingdom.

If we’re in the world, but not of the world, then we participate in the world, experiencing all its ups and downs, while also having the interior freedom to see the world as an expression of God, seeing God’s Truth in all things, including ourselves.

The good news is that Jesus offers us a path back to interior freedom. This path, though, is counterintuitive in its simplicity, especially in our culture of extreme busyness, productivity, and the need to always be doing something. The way of Jesus, it turns out, is mostly about doing nothing. That’s one reason Meister Eckhart called the way of Jesus the Wayless Way, because it’s not about getting somewhere or doing something, but about coming to rest where we already are.

It might not seem obvious, but if you’re completely absorbed in a movie, forgetting it’s just light on a screen, your mind is expending energy and effort to sustain that illusion. Or look at it this way, if you’re watching a movie, caught up in the story, how much effort does it take to notice the movie as just light on a screen? It takes no effort at all, just a shift in awareness which happens quite naturally when we’re at rest.

Abiding in Christ, in God’s Kingdom, is the fulfillment of God’s greatest wish for us. God wants us to reclaim our interior freedom and be free from the sin of the world. God wants us to escape the slavery of sin and abide in the eternal Peace and Joy of Christ beyond understanding.

We fulfill God’s wish for us, receiving this amazing grace when we follow where Jesus leads, abiding with him and finding deep rest for our souls. When we let ourselves rest in God’s presence, we let go of all the ways the world has us in its grip, so we’re free to be in the world, but not of the world. From this place of rest, we allow God to heal us and make us whole, dying with Christ, and rising as new creations in Christ.

Abiding in Christ is the fulfilment of God’s desire for us, and the fulfillment Jesus brings us as his disciples. Our hope is that we follow Jesus’ Wayless Way back to our true home, God’s Eternal Kingdom, where we bear witness to God’s Truth, Beauty, and Goodness in all things.

Have you ever bragged about someone else?  Maybe you’ve told someone how beautiful and talented your spouse or partner is and how fortunate you feel to have him or her in your life.  Or maybe you’ve boasted about a gifted teacher you once had, or about how sensitive and helpful your doctor is.  Or maybe you’ve taken delight (without being too proud) in talking about your children or your grandchildren, and how truly exceptional they are.  I like Garrison Keillor’s boast about Lake Wobegon: “where all the women are strong, all the men are good-looking, and all the children are above average.”  END_OF_DOCUMENT_TOKEN_TO_BE_REPLACED