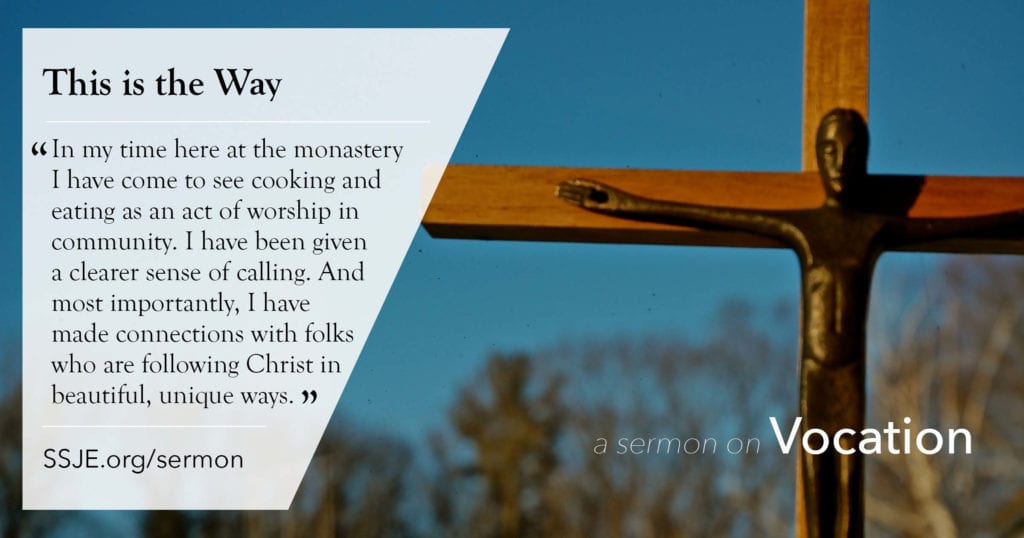 When I was a quiet little fourth grader I had a pretty unusual answer to the question, “What do you want to be when you grow up?” I wanted to be a priest on Sundays and a baker during the week. But whenever people would ask me, I wouldn’t tell them that; I would give them an expected fourth grade answer like teacher or baseball player. I couldn’t see anyone else doing what I wanted to do, so I kept telling myself that my dream was impossible. Even though I had heard Isaiah say “this is the way; walk in it” (30:21) and Jesus say “I am the Way, the Truth, and the Life” (John 14:6) I didn’t trust that to be the case for my way. But as I grew older I started to embrace the unconventional path that has led me here to preach at a monastery in the middle of the city, something I never thought I could do. And a month from today I’ll be following this way to Plainsong Farm in Michigan to dive deeper into the intersection of food and faith.

I was so afraid to start walking in this way though. I didn’t see anyone else doing what I wanted to do. But I knew that Jesus used agricultural metaphors in so many of His teachings. “Very truly, I tell you, unless a grain of wheat falls into the earth and dies, it remains just a single grain; but if it dies, it bears much fruit.” (John 12:24). We are told to trust 98 times in the Gospel according to John[1]. But I had a veil over my eyes, I couldn’t see far beyond my own doubts. When I let myself be vulnerable and I let that veil be lifted by Christ, I saw that I was not alone. In my time here at the monastery I have seen fruit beginning to grow. I have baked so many loaves of bread for supper. I have come to see cooking and eating as an act of worship in community. I have been given a clearer sense of calling. And most importantly, I have made connections with folks who are following Christ in beautiful, unique ways.

We remember Philip and James today. We really don’t know much about James the Lesser besides his membership among the Twelve. We do know that Philip was an early and enthusiastic follower according to John as he told Nathaniel to “come and see”. (John 1:43-46). Not long after this, he questioned Jesus at the feeding of the 5,000 saying “six months’ wages would not buy enough bread for each of them to get a little” (John 6:7) but he saw Jesus feed them all with plenty to spare. In today’s gospel we see that Philip is having a hard time grasping what Jesus is saying about His relationship to the Father. There is some tension between them during this farewell discourse as Jesus prepares His disciples for His Passion. But even though there was tension and Philip couldn’t see clearly, he followed and received the Holy Spirit with his community. The Twelve all dropped everything and turned away from the status quo. As they followed the Way of Christ they found each other.

Jesus tells us that He is about to return to the Father, but He does not leave us alone. We are given peace and the gift of the Holy Spirit and the gift of community. We are told that if we follow His way we will do great things. So follow that unconventional path and you will be lead to places and people you never imagined could be possible. Don’t try to fit the expectations of the world. Follow that still small voice telling you “this is the way; walk in it” (Isaiah 30:21). 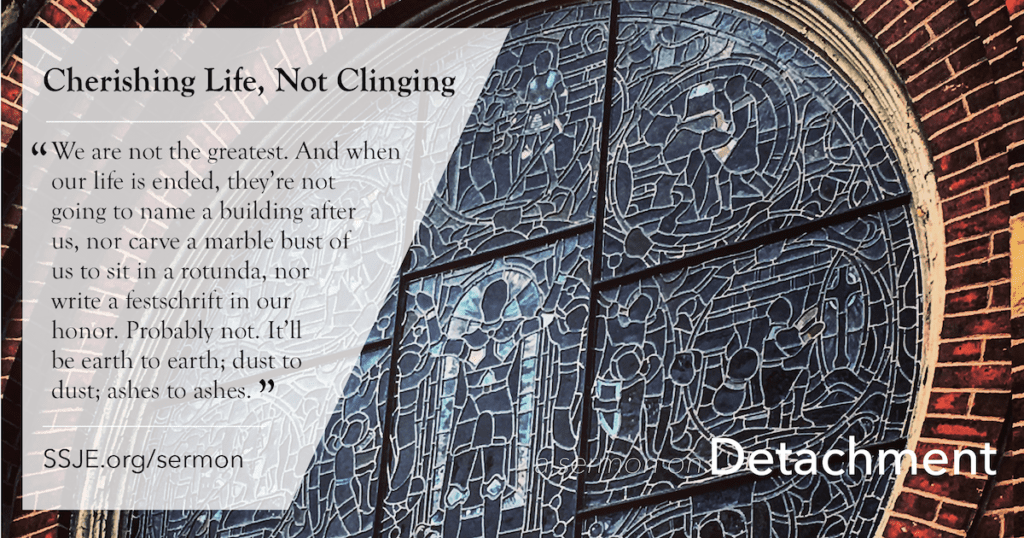 In the calendar of the church we remember today Saint Philip and Saint James, both of whom were chosen by Jesus for his original circle of twelve Apostles. But here I must make a disclaimer. We know almost nothing about them. This Apostle James is not James, son of Zebedee, who, with his brother, John, had lobbied Jesus to sit at his right hand and left hand when Jesus came into power in Jerusalem.[i] Nor is this the James, the brother of Jesus, the brother traditionally known as the author of the Epistle of James and the sometime-Bishop of Jerusalem.[ii]  This is James #3, son of Alphaeus, whom we know nothing about.[iii] This James is often called “James the Less,” which is not exactly flattering, but helps avoid some confusion with James #1 and James #2, about whom we know more.

As for Philip, he came from the same town as two other Apostles – the brothers Andrew and Peter – and that was Bethsaida, alongside the north shore of the Sea of Galilee. In the Gospel according to John, we read that Jesus “found” Philip.[iv] Like with the other Apostles, Philip took a long time to understand Jesus. In the Gospel according to John, we read about the multitude of hungry people listening to Jesus teach. Jesus then asked Philip, “Where are we to buy bread for these people to eat?” We are told Jesus already knows what he is going to do, and so this is a test for Philip. Philip essentially fails the test. He answers Jesus, “Six months’ wages would not buy enough bread for each of them to get a little.” Jesus then feeds the multitude with a boy’s five barley loaves and two fish.[v] On another occasion Philip fails the test again. He says to Jesus, “Lord, show us the Father, and we will be satisfied.” Jesus answers Philip in exasperation, “Have I been with you all this time, Philip, and you still do not know me? Whoever has seen me has seen the Father. How can you say, ‘Show us the Father?’”[vi] END_OF_DOCUMENT_TOKEN_TO_BE_REPLACED

When a man first comes to the monastery to test his vocation, you may be surprised to know that he does not get a large ‘how to’ manual on being a monk.  Nor does he receive a week-long orientation in the essentials of monastic living.  Much of what a postulant and novice learns is by observation, trial and error, and asking questions when they arise.  When he sings the Offices with the Community, (regardless of his proficiency in music fundamentals) he learns a strange musical script with a four-line staff and peculiar square notes that when stacked on top of each other means they ascend and when written in progression means they descend.  He learns that the bell rings ten minutes prior to each service although he may find himself sitting in chapel alone and confused for fifteen to twenty minutes when the Angelus bell rings at noon and no one shows up.  There is often that awkward moment when learning to acolyte that he lights the candles on the altar at noonday prayer only to have them extinguished with an explanation that candles are not lit at the noon office.  I sometimes joke that I’ve been here over five years and I’m still learning new things each week, although now they are more often epiphanies that dawn on me mysteriously, out of the blue.  For me, our lesson this evening from John’s gospel illustrates how the experience of novice monks is not dissimilar from that of Jesus’ disciples. END_OF_DOCUMENT_TOKEN_TO_BE_REPLACED

Today we celebrate the roles played by Saint Philip and Saint James as apostles to Jesus, although we don’t really have much to go on. In the case of James, he’s one of a number of James mentioned in the New Testament. The list includes James the son of Zebedee who was frequently mentioned alongside Peter; there’s James the Just, called “brother of the Lord,” who’s described as an important leader in Jerusalem; and then there’s James the writer of one of the New Testament letters. But the James we celebrate today isn’t any of them, and in fact, besides his being listed as an apostle, that’s the only  other thing we know about James, who he wasn’t. And so he winds up getting stuck with the somewhat inglorious title James the Less. END_OF_DOCUMENT_TOKEN_TO_BE_REPLACED

In the calendar of the church we remember today Saint Philip and Saint James, both of them chosen by Jesus for his original circle of twelve Apostles.  But here I must make a disclaimer: we know almost nothing about them.  This Apostle James is not James, son of Zebedee, who, with his brother, John, had lobbied Jesus to sit at his right hand and left hand when Jesus came into power in Jerusalem.1  Nor is this James, brother of Jesus, traditionally known as the author of the Epistle of James and sometime Bishop of Jerusalem.2  This is James #3, son of Alphaeus, whom we know nothing about.3   This James is often called “James the Less,” which is not exactly flattering, but helps avoid some confusion with James #1 and James #2, about whom we know more. END_OF_DOCUMENT_TOKEN_TO_BE_REPLACED