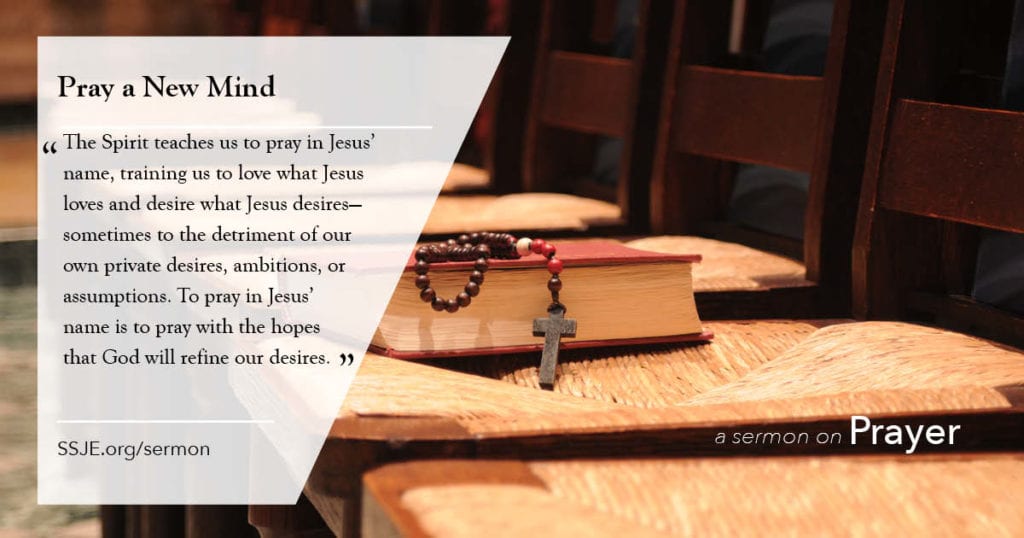 If in my name you ask me for anything, I will do it.

To my mind, the final line of this morning’s gospel is at once an indescribable consolation and a never-ending source of perplexity. Perhaps even frustration. If in my name you ask me for anything, I will do it. How many of us have been caught off guard or even startled by this phrase? Did he really just say what I think he said?

During the so-called “Farewell Discourses” of John’s gospel (chapters 14—17), we greet a host of similarly enigmatic phrases such as:

“I am the way, and the truth, and the life.” “Do you not believe that I am in the Father and the Father is in me?” “I do not give to you as the world gives.” “As the Father has loved me so have I loved you; abide in my love.”[1]

Yet this infinity is lost to us if we simply hear what we would like to hear. Because of this, I believe there is wisdom in praying with a sensitivity to what a text is decidedly not saying. Yes, he really did just say something remarkable, but whereas I would like to hear Jesus say to me, “if you ask me for anything, I will do it,” this is not what Jesus says. We have to reckon with those three little words: in my name. END_OF_DOCUMENT_TOKEN_TO_BE_REPLACED 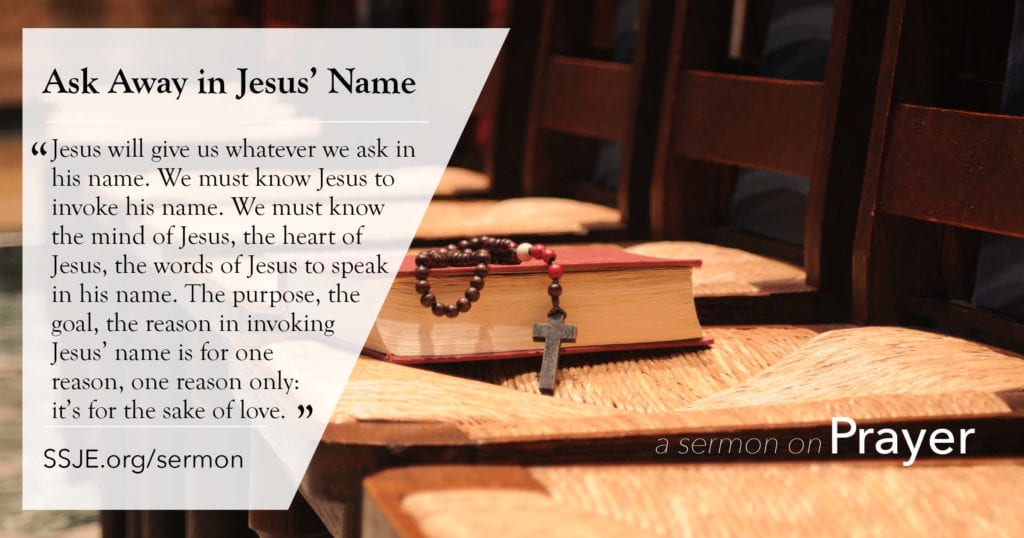 I well remember in my early adolescence discovering these words from the Gospel: Jesus telling us when we pray, “I will do whatever you ask in my name.”[i]That really got my attention! I began asking away, and for a great many things: that I would get an “A” on my geography test. That I would win the prize at camp. That Martha, my classmate with whom I was smitten, would like me. That Butch Hendricks wouldn’t beat me up after school. That my Aunt Ingeborg would get over her cancer. That I would make the cut on the basketball team, and get a uniform. I prayed almost without ceasing. I asked for everything and anything on my mind. It didn’t work most times. And so I got up early to pray. I stayed up late to pray. I clasped my hands when I prayed. I opened my hands when I prayed. I closed my eyes; I opened my eyes. I knelt beside my bed. I secretly carried my Bible to school in my backpack. I memorized Bible verses. I avoided cracks on the sidewalk.  I avoided odd numbers. I promised to eat all my vegetables.  I ate all my vegetables. I didn’t chew gum at school. I promised never to cheat.  –It was like trying to open a safe which I knew was full of treasure. If I could only get the combination right, I knew I could make this verse work: that I could ask Jesus for anything, and I would get it. It didn’t work. Not often. It sure wasn’t anything to depend on, and I remember “dropping” this Bible verse, like dropping a fad.

It was the context of Jesus’ invitation that I only later discovered. The weight of what Jesus promises is not on the word “ask” but on two other words: the pronoun ‘you’ and the word ‘name,’ Jesus’ name. What about the name?

There is an extraordinary amount of power in knowing someone’s name and then using it. To know someone’s name gives you a clear access to them and a claim on your relationship. To use someone’s name gives you the power of identification. And I suspect we all know when that power is misused. It’s when someone “name drops.” When someone feigns to know another person – who they are, what they believe, how they can be accessed. If someone invokes the name of a person with power, but without the license to use that name, it will backfire, eventually… because other people will always know better… that this person whose name is invoked would not say that or could not have said that. It’s inconsistent or incongruous… and the pretender will be exposed.

Which is the key in claiming this invitation that Jesus gives us: that Jesus will give us whatever we ask in his name. We must know Jesus to invoke his name. We must know the mind of Jesus, the heart of Jesus, the words of Jesus to speak in his name. The purpose, the goal, the reason in invoking Jesus’ name is for one reason, one reason only: it’s for the sake of love, so that we may love Jesus, and be loved by Jesus and then love others in Jesus’ name, that is, as Jesus loves them.  If we’re to take Jesus’ invitation and ask for whatever it may be, our asking cannot be just on behalf of our own private self, but on behalf of all whom Jesus claims.

And then, when Jesus says ‘you’ – “whatever you ask” – this is not a ‘you-singular’ but ‘you-plural’: “you all.”  This isn’t about me; this is about us, what wecollectively need. The founder of our own community, Richard Meux Benson, calls this “the relative life.” Father Benson says, “Your life must be a relative life. The moment you are imprisoned in your own self-consciousness, in your own separate individuality, in the selfishness of your own separate existence, you commit a worse suicide than taking the life of your body. You destroy the very life of your person.” Father Benson says that we are a relative being, and we have no existence except when we live, ask, and act on behalf of another, in Jesus’ name.[ii]

We should take Jesus at his word, to ask away. Jesus assures us, “I will give you whatever you ask in my name….” In my adolescence, the problem wasn’t that I was asking for too much; I was actually asking for too little. We need to know a great deal about Jesus and the enormity of his love – what Jesus would want for those for whom we pray – and then pray our hearts out. And in our praying, we should presume that Jesus will very likely reciprocate, in asking us, asking you, to be a part of the answer to that prayer.

[i]To make a strong point, Jesus is here repeating what he has said in the previous chapter of the Gospel according to John (14:6-14).