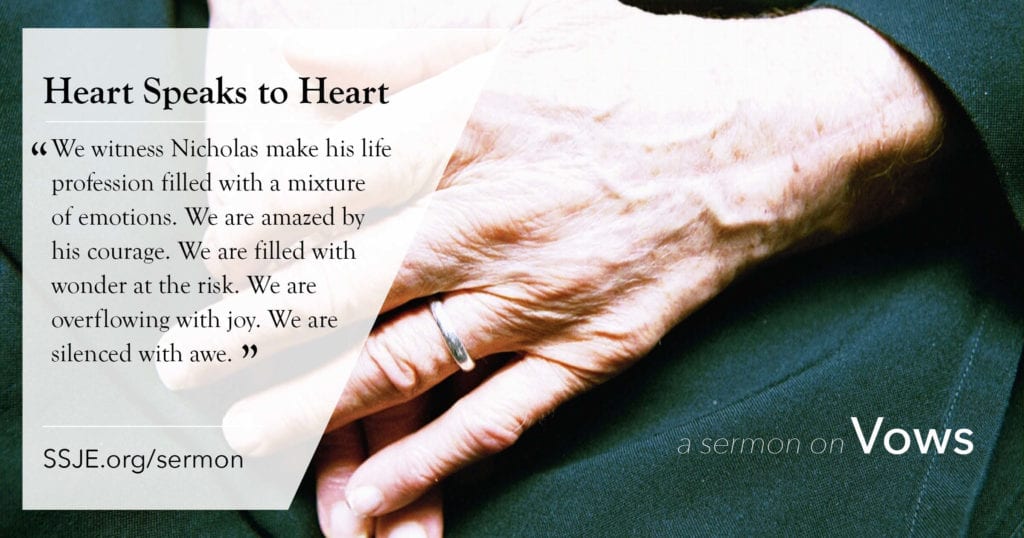 In the midst of all of this, I tried to convince Nicholas that leaving, at least leaving when he was thinking about doing so, was not a good idea. But in case you didn’t know, Nicholas has a stubborn streak in him as wide as the Brooklyn Bridge! What saved the day was a conversation he had with a good friend of ours. In the course of that brief conversation, our friend put a couple of questions to Nicholas. In less than an hour Nicholas’ mind was changed as whole new possibilities opened up. A little more than a year later, here we are. Here we are to witness, and support, and encourage Nicholas as he makes his life profession in our Society, promising to God and before the whole company of heaven and in the presence of this congregation … that [he] will live in life-long observance of poverty, celibacy, and obedience, according to the Rule of this Society.

So friend, if you are out there, we owe you our profound thanks, because if it weren’t for your intervention, today’s profession would not be happening! (Although, there may be days in the future we blame you that it has happened!)

Well I am certainly impressed. Never in a million years did I imagine that so many people would show up today. I really only expected the brothers, the guests in the guesthouse and our regulars at the Saturday Eucharist. But look at you! You have come from near and far: Georgia, and South Carolina, from New York and parts in between. You have come from any number of places around Cambridge and Boston, and all to show your dedication, your devotion, your loyalty, your faithfulness, your friendship to someone whom we are told, was of remarkable life and learning.[1] And you are all dressed up to boot! That’s all pretty impressive, and we are honoured by your presence at this celebration today. The one person that I don’t see here though, surprises me by his absence. I don’t see the Mayor of Boston here. And that surprises me. Of all the people who should be here, he’s at the top of the list. Why isn’t he here with us today as we celebrate the feast of St. Botolph, the Patron Saint of Boston? END_OF_DOCUMENT_TOKEN_TO_BE_REPLACED