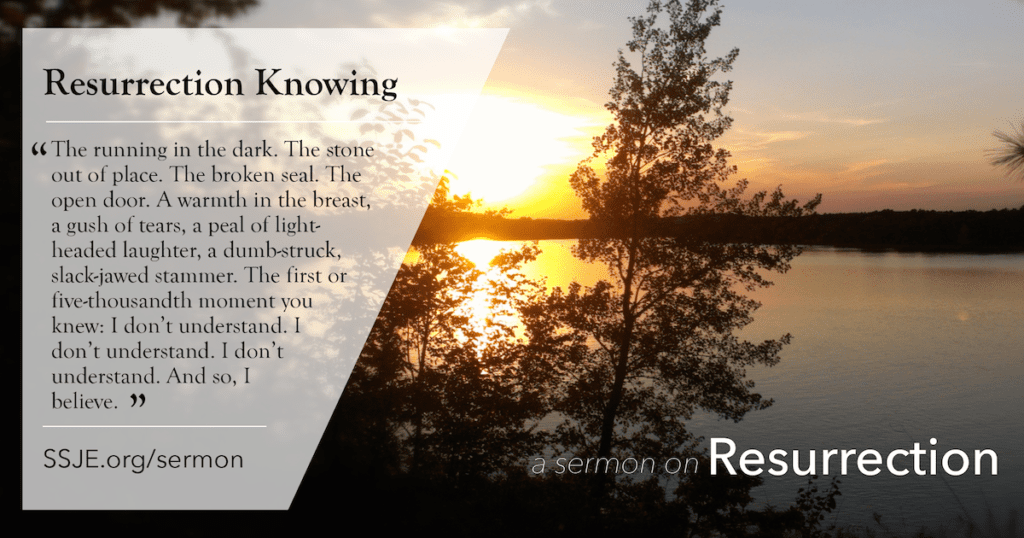 Running in the dark
a stone out of place
a broken seal
an open door.

Sweat evaporating on necks and ankles chills the skin of of two men who followed Him everywhere.

Tears well up and spill over in the eyes of a woman who loved him above all else.

in the face of a
newfound,
deafening
absence
where He who said I AM seemed not to be

and yet
Light shines in the darkness, and the darkness has not overcome it.
Words whispered in the beginning return
a new song gathers within the silence. END_OF_DOCUMENT_TOKEN_TO_BE_REPLACED 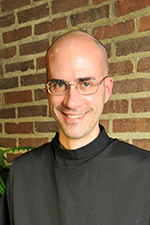 Jesus came standing next to Mary Magdalene, but she did not know it was him. When Jesus called Mary by name, she recognized him. A most brief and beautiful portrait, so intimate, so familiar. Mary felt she had lost everything: her Lord, her friend, her way. Called by her name, Mary was found; she regained sight, saw Jesus beside her.

Jesus calls us by name. Some people hear God speak literally, audibly, as Mary did. That is not my experience. If it is, I missed it. If you experience that, be grateful. I do hear God call me by name, and it is powerful, resurrection power, like what Mary experienced. I bet you have experienced it too. END_OF_DOCUMENT_TOKEN_TO_BE_REPLACED

Jesus greets Mary Magdalene in the garden near his tomb.  He has come back from the dead, alive, resurrected, and yet he is very wounded.  Jesus’ body is still wounded by the scourgings that preceded his crucifixion, and the horrific piercing wounds to his side and to his hands, hanging from the cross.  None of these wounds is healed.  And Jesus’ heart is also wounded by the betrayal and abandonment of his closest friends, the disciples who literally left Jesus hanging.  The women, who were there when their Lord was crucified, witnessed it all, a horrific experience.  And this surely leaves the women wounded by the trauma. Meanwhile the disciples are hiding – hiding in their own fear, sorrow, and shame – and this, too, shows a wounding.[i]  No one can hurt us like we can hurt ourselves, when we become our own worst enemy.  On this day of resurrection, everyone in the Gospel story is not okay.  Everyone is wounded, and this is likely true for many of us here. We can simultaneously acknowledge Jesus’ resurrection and, at the same time, acknowledge that everything is not all right in our world or in our own lives.  Many of us here today may bear the wounds of life, of one sort or another.  Bishop Barbara Harris says, “We are a resurrection people living in a Good Friday world.” END_OF_DOCUMENT_TOKEN_TO_BE_REPLACED

Something happened on a hill, in a garden and in an upper room long ago in Jerusalem. Something is happening on beaches, in churches, shopping malls, hotels and university campuses today; in villages we have never heard of and cities and towns where many of us have never been and where most of us will probably never go.

Something happened and something is happening.

What happened, on first glance, was not all that unusual. It was a brief encounter between a grief stricken woman and a caring gardener. But what actually happened changed lives and set in motion a tidal wave that continues to toss and turn people nearly 2000 years later. A question asked. A name spoken. A pair of eyes opened. A command given. A breathless run taken. END_OF_DOCUMENT_TOKEN_TO_BE_REPLACED

I read once that the great Danish astronomer Tycho Brahe used to put on court robes when he went into his observatory. For Tycho, gazing out into the heavens was a great occasion, and being from an aristocratic family, he had court robes to wear. His great contribution to science was a new level of accuracy in measurements and reliance on empirical observation.  His geo-centric cosmology gave way to the heliocentric scheme of Copernicus, but Tycho, along with Kepler and Copernicus and Galileo, remains one of the fathers of modern astronomy.  I don’t know if Kepler or Copernicus or Galileo ever wore court robes to go to their observatories.

But today the Church puts on hers.  It’s a great occasion; it’s the greatest occasion.  If there’s ever a day to create a sense of great occasion with damask, brocade, flowers, incense and beautiful music, it is today.  Today is the greatest occasion because God has addressed our worst fears and our highest aspirations—“the hopes and fears of all the years”, as one of our Christmas carols puts it. This is the occasion of all occasions, the day of all days. The “court robe” that I’m wearing, this cope, was hand crafted as an ordination gift from my parents, who live now in resurrection light.  It fit a little better 20 years ago when I was an inch taller. END_OF_DOCUMENT_TOKEN_TO_BE_REPLACED

The body would have begun decomposing very soon after death, both because the Jews did not practice embalming, and because of the Middle Eastern heat.  The normal practice was to wash, then anoint the body with spices, including myrrh and aloes, to mask the smell of death.  Then the body would have been wrapped, head to toe, with linen swaths and finally, the body shrouded with a linen garment before it was placed in the tomb.  But nothing could mask the grief, then as now: the sadness, the tears, the questions without answers.  All of this would have gone on during the visitation at the grave, where they rolled the stone away.  I’m not speaking here about Jesus’ death; rather the death of Lazarus – Jesus’ beloved friend, brother to Mary and Martha.  Jesus visits the tomb of Lazarus, and it is Jesus who weeps.1

This story of the death Lazarus is told in the Gospel according to John not that long before the story recording Jesus’ own death.   In the case of Lazarus, Jesus looks into the tomb and proclaims with a loud voice, “Lazarus, come out!”  And you may remember what happens: there’s a resurrection.  Lazarus is brought back to life!  END_OF_DOCUMENT_TOKEN_TO_BE_REPLACED

We have this old phrase, “misery loves company.” Peter and the Beloved Disciple were keeping company in their misery, but not for the same reasons. The Beloved Disciple was grief stricken over the horrendous crucifixion of his dearest friend, Jesus, with whom he had stayed until it was finished. Peter, on the other hand, was frightened and appalled by his own betrayal of Jesus, whom he had denied and abandoned from the bitter outset. The two disciples were together but in very different places when they hear the news from Mary Magdalene that Jesus’ body is gone. They run towards the tomb independently, no surprise. The Beloved Disciple would be ecstatic, remembering Jesus’ promise that if he were killed, he would come back to life; he would be resurrected. Peter, on the other hand, would be in agony. He, too, had heard Jesus’ prediction about his resurrection. But Jesus’ resurrection for Peter would be so very, very difficult because of his having to face Jesus. Peter would need to ask Jesus’ forgiveness… again. Not that Jesus would not forgive Peter, but that he would, as Jesus had undoubtedly forgiven him so many times before. How many times had Jesus forgiven Peter already? More than Peter could imagine.[i] You may recall Jesus had renamed Peter “his rock,” not just because he was so strong, but because he was so hard-headed.[ii] Peter here is running in very familiar territory as he races to Jesus’ tomb, only this time it’s much worse. This time, Peter has crossed a line; he now is more a follower of Judas and than Jesus.

END_OF_DOCUMENT_TOKEN_TO_BE_REPLACED

The body would have begun decomposing very soon after death, both because the Jews did not practice embalming, and because of the Middle Eastern heat.  The normal practice was to wash the body, then anoint the body with spices, including aloes and myrrh, to mask the smell of death. END_OF_DOCUMENT_TOKEN_TO_BE_REPLACED