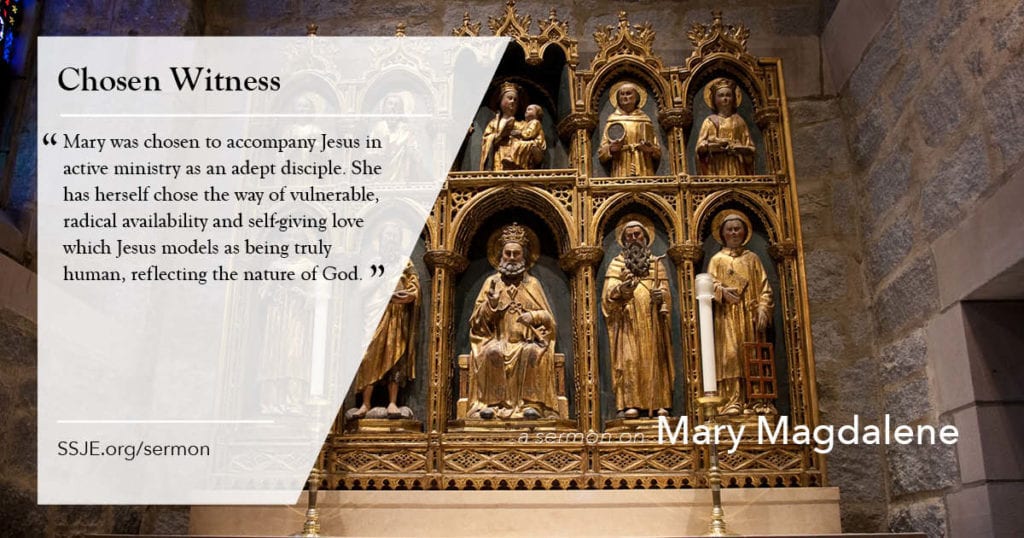 Though racked by tears, the woman continues her search for the missing Man, the Beloved One. Bending to look into the tomb, the woman sees what the other two did not. Angels in dazzling white frame and shelter the empty burial slab. Though not yet fully aware of it, the woman is granted entrance to the Holy of Holies, the throne room of the God from whom the Man has come and to whom he is returning. The burial stone has become the heavenly mercy-seat; it is now the blood-sprinkled altar of the self-offering and re-creating God who took on human flesh to redeem us all. END_OF_DOCUMENT_TOKEN_TO_BE_REPLACED 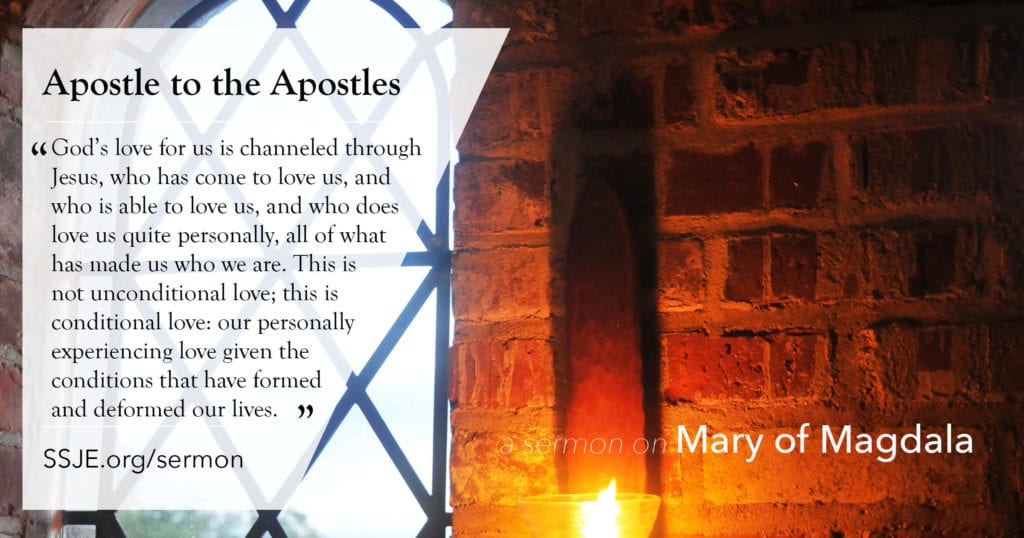 We don’t know when or where Jesus met Mary of Magdala. We do know that she and a number of other women followed Jesus from the beginning of his ministry in Galilee.[iii]She was apparently a wealthy woman; however we know nothing of her family or her vocation.[iv]Neither do we under­stand Mary’s condition when she first met Jesus, other than she had been very unwell: “seven demons had gone out of her.”[v]  In Jesus’ day, “demon possession” was a catch-all distinction, and could mean some form of physical, or mental, or spiritual, or moral “dis-ease,” or a combination.  The reference to the “seven demons” might emphasize either the seriousness of her condition, or its recurrent nature.[vi] In any event, she was a person in great need, and a person who came to have an equally-great devotion to Jesus. We meet her in this Gospel lesson, weeping at Jesus’ tomb.

Why? She is asked by the angels why is she weeping? She responds, “Because they have taken away my Lord.”  What is behind her tears? What was her grief about?  It’s not completely clear, so we can only conjecture about Mary’s relationship with Jesus. Three things come to my mind:

Throughout the gospels, Jesus comes again and again with a simple message: do not be afraid. Sometimes he says this himself, and sometimes he sends a messenger. At his conception, the angel said to the Virgin Mary, “Do not be afraid.”1 At his birth, the angels announced to the shepherds in the field, “Do not be afraid.”2 When Jesus first called Peter, John, and James from their fishing boat, he reassured them, saying, “Do not be afraid.”3 At the Transfiguration, when the same three disciples fell over in terror on the mountaintop, Jesus told them, “Do not be afraid.”4 This is, no doubt, meant as a sweet comfort. But it is also a teaching, and a command. Christ even goes so far as to fundamentally juxtapose fear and faith: “Do not fear, only believe.”5 END_OF_DOCUMENT_TOKEN_TO_BE_REPLACED 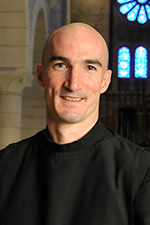 This is not a once and done thing, and we know that, too. Recognizing our identity in Christ Jesus is a lifelong process: we die and we rise, we fall down and get up, we are buried and raised over and over again. Before we can be raised to newness of life we have to die, and we know that. END_OF_DOCUMENT_TOKEN_TO_BE_REPLACED

Mary of Magdala is “a complicated person.”  This is not Mary, Mother of Jesus.  Nor is this Mary of Bethany, sister to Martha and Lazarus.  This is Mary of Magdala, the agricultural, ship-building, trading center of Magdala, northeast of Jerusalem.  Magdala was a hot spot commercially and socially, and it had a wild and wicked sort of reputation.  We don’t know when or where Jesus met Mary of Magdala.  (The Scriptures don’t record Jesus’ ever having even visited Magdala.)  We know nothing of her family or upbringing.  Neither do we understand Mary’s condition when she first met Jesus.  There really is no substantiated reason for assuming that this Mary of Magdala had been a harlot… other than she has been distinguished, down through the years, by her association with the town of Magdala.

Magdala was that sort of place… and the fact that so much energy has been spent down through the centuries to “clean up” her reputation may mean she did have a colorful past.  We don’t know for sure. END_OF_DOCUMENT_TOKEN_TO_BE_REPLACED

If you have traveled up the coast of New England , passing through one seaport after another, you will probably have noticed any number of large late eighteenth- and early nineteenth-century houses overlooking the harbors and bays. Many of these houses have, at their very tops, small, square porches fenced around by a railing. END_OF_DOCUMENT_TOKEN_TO_BE_REPLACED