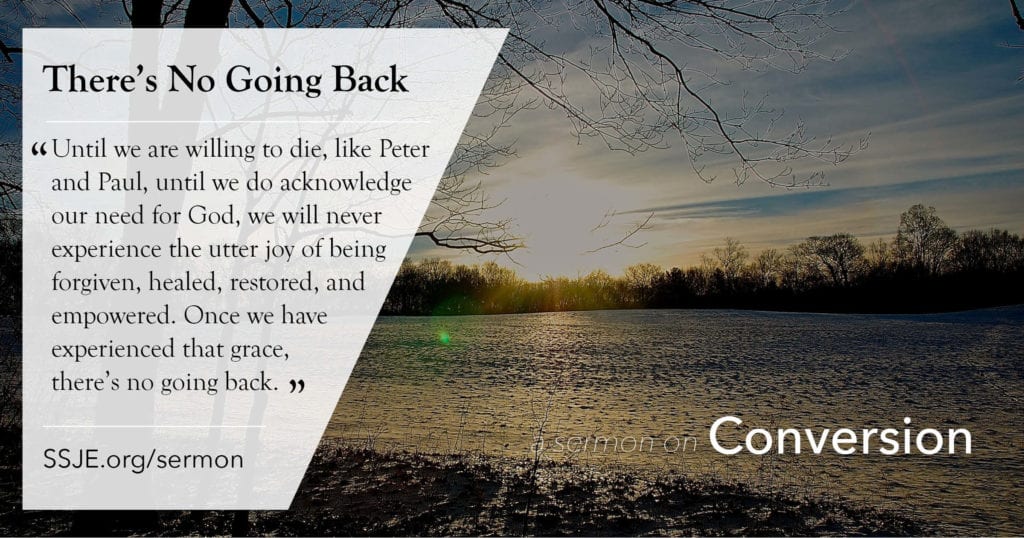 In our readings today there are two wonderful accounts of how the greatest leaders of the church – Peter and Paul – each had to learn, in a way which was both humbling and painful, that to follow Jesus, first meant a real death to the life which they had lived until then. They had to become a new creation. They had to be born anew before God could use them for the work of the Kingdom.

So when, in our Gospel today, Peter says, ‘I am going fishing’ – I’m going back to the old life – that was no longer possible. He was a good fisherman, his strong hands were skilled with the ropes and the nets. But although he toiled all through the night, he caught nothing.  Something had changed. What had changed was that Jesus had called him to follow him, and he had said YES. But what he was yet to learn was that he could not follow Jesus on his own terms, in his own strength, in the old way. That had died.

These skilled hands of the fisherman would be used by Jesus, but first Peter had to come to Jesus empty handed. And perhaps there is no more poignant moment in all the gospels than when Peter comes ashore, and sees Jesus sitting beside a charcoal fire. That word ‘charcoal’ is only used twice in the New Testament: here and in the courtyard of the High Priest Caiaphas, where Peter stood warming himself, and where he denied knowing Jesus three times.

END_OF_DOCUMENT_TOKEN_TO_BE_REPLACED

The time was several days after Jesus’ second appearance to his disciples in that upper room in Jerusalem.  The Place was somewhere on the Western Shore of the Sea of Galilee.  Seven of Jesus’ disciples were gathered there, waiting to see what would happen next.

Peter said to the others, “I’m going fishing”.  It was only natural that he should think of doing what he had done before Jesus called him. END_OF_DOCUMENT_TOKEN_TO_BE_REPLACED

The Sea of Tiberias, the Sea of Galilee, is actually well below sea level, so the heat in warm weather can be really oppressive.  And the outcroppings of black basalt along the northern shore just keep on baking the landscape through the night.  It’s not surprising that Peter would be stripped down to the minimum required by Jewish modesty.  They’re probably all in their hot weather work clothes. But that Peter immediately covers himself when he realizes the Lord is near may remind us of someone else. Adam and Eve hid their nakedness when they heard the Lord in the garden.

Peter, too, is deeply ashamed. Those three denials are seared into his heart forever. And, yet, in spite of his guilt, in spite of his fear, he makes his way as fast as he can to the Lord’s side.  We can imagine him in his confusion thrashing his way through the shallow water trying to get his clothes on right, stumbling over the rough stones.  He knows his guilt. But he also knows his Lord.

A cloud of despondency has hovered over the scene.  They’re tormented by the coulda-shoulda-wouldas of those terrible days in Jerusalem. And they can’t even catch fish. Grief, shame and a sense of  utter failure pervade the atmosphere.  And they’re probably all, like Peter, feeling utterly exposed in their despondency, utterly stripped down, totally vulnerable.

The Risen Lord’s response?  Let’s have breakfast!  It’s OK—come and eat!  I’ve already got a good fire going.  Bring one of those fish you just caught.  It’s OK—don’t bother to dress up—I’ve seen you with your shirts off before—come as you are! The bread is already toasting.  And I may even have a little wine here somewhere… It’s OK; c’mon—you must be hungry, you must be thirsty.