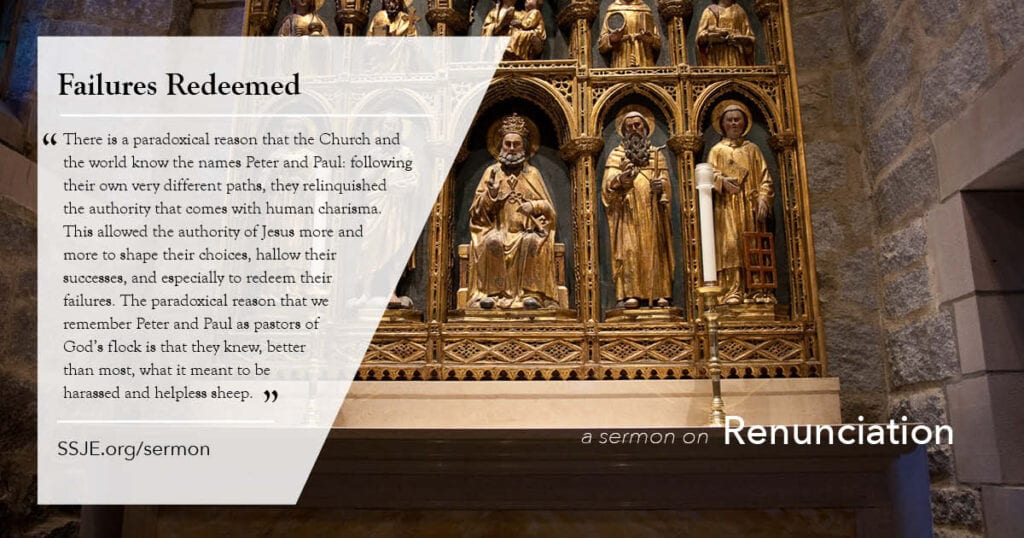 Both men had utterly life-changing experiences of the crucified-and-risen Jesus. This Jesus spoke to both men individually and personally. Each received a calling that only Peter and only Paul could fulfill.

Both men were tasked with stewarding the ancient traditions of their ancestors and faithfully making meaning of that stream of wisdom while at the same time living from the heart of a new awareness: that their Lord and Messiah had, in their experience, radically changed the course of that history. This new awareness was subject to misunderstanding and rejection; and so were they.

Both men were asked, repeatedly, to adapt to circumstances they could never have imagined; to adopt a new perception of how God communicated with God’s people; and to embody a new paradigm for gathering and nourishing the community of God. The limitless boundaries of this community – nothing less than the Body of Christ — took them on an odyssey far from home, spiritually and geographically. END_OF_DOCUMENT_TOKEN_TO_BE_REPLACED 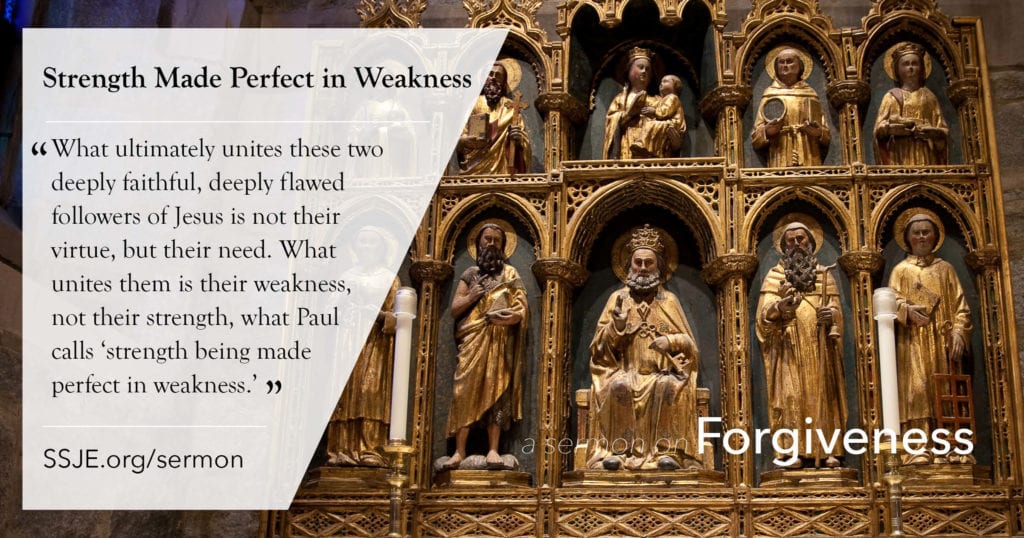 Jesus had said to his apostles, “You did not choose me, but I chose you.”[i]  This certainly applies to Peter and Paul.  I don’t think they would have chosen each another to be members of Jesus’ closest circle.

Paul was erudite, both a Pharisee and a Roman citizen. He was literate and probably multi-lingual. Peter, on the other hand, was from backwater Galilee, way up north and nowhere. There was this rhetorical, tongue-in-cheek question people from Jerusalem asked about Galilee: “What good can come out of Galilee?” What did Peter actually know about? Fish. Peter knew his fish.  In the ensuing years, two letters attributed to Peter eventually found their way into the New Testament. Whether Peter penned these letters himself or if he used a scribe, we don’t know. And Peter was married; Paul was not.

Peter and Paul did have several things in common. They were both very strong-willed. And they both had significant character flaws. At the time of Jesus’ crucifixion, Peter publicly denied even an acquaintance with Jesus. And Paul was complicit in a murder, the murder of a fellow Jew, in an attempt to squelch the cult that was following Jesus.[ii]Both Peter and Paul were eventually arrested – their attention was arrested – by Jesus. Both of them became zealous, fearless followers of Jesus. Both of them were ultimately martyred for Jesus’ sake.

For many years following his conversion to Christ, Paul had lived in a self-imposed exile in the desert and in Damascus. Paul eventually comes to Peter to learn about his leadership in the church at Rome. Peter has come a long way. In his writings, Peter speaks of Paul as his “beloved brother” and acknowledges the wisdom of Paul’s writings, but as an aside, Peter says he knows that some people find Paul’s writings difficult to understand.[iii]  On the other hand, Paul recognizes Peter’s seniority, Peter having been called by Jesus as “the rock” on whom Jesus planned to build his church.  Peter and Paul held each other in deep respect and affection… except when they did not.

Did the non-Jewish converts to Jesus actually need to become Jews?  Must Gentiles be circumcised?  Must they adopt Jewish dietary laws?  Or was baptism sufficient?  Should the focus of Peter and Paul’s energies be on their fellow Jews, or should it be on the Gentiles?  The two of them wrangled about these things and others, sometimes agreeing, sometimes not.[iv]  St. Paul’s letters are very self-revealing. When Paul writes to his fellow Christians, more than once, about “jealousy, quarreling, anger, dissension, factions, slander, gossip, and conceit,” he’s not just writing about other people; he’s writing autobiographically, about himself.  Peter is much the same. When he writes to “rid yourselves of all malice, and all guile, insincerity, envy, and all slander,” he’s writing to the church; but he’s first writing to himself.[v]

What ultimately unites these two deeply faithful, deeply flawed followers of Jesus is not their virtue, but their need.  What unites them is their weakness, not their strength, what Paul calls “strength being made perfect in weakness.”[vi]  What broke their hearts open for one other and for so many other broken followers of Jesus were two things: one, a humility, redeemed from their mistakes in judgment. Peter writes in a very self-revealing way: “All of you, have unity of spirit, sympathy, love for one another, a tender heart, and a humble mind.”[vii]  And Paul is first coaching himself when he writes to the church in Corinth: “Love is patient; love is kind; love is not envious or boastful or arrogant or rude. It does not insist on its own way; it is not irritable or resentful; it does not rejoice in wrongdoing, but rejoices in the truth. It bears all things, believes all things, hopes all things, endures all things.”[viii]  Paul is reminding himself.

The other character flaw that unites them was their own need to be forgiven, endlessly.  They realized that they, again and again, had either missed the mark or attained the mark but in the wrong way.[ix] St. Paul confesses: “I do not understand my own actions. For I do not do what I want, but I do the very thing I hate.”[x]  These two very driven, very hard men were broken open by their own awareness of need.

Michael Ramsey, sometime Archbishop of Canterbury, says that “the secret of the Christian is not that he [or she] is always in the right and puts other people in the right, but that he [or she] is forgiven. That is the secret of a Christian’s humility, liberation, and strength.”[xi] In the end, both Peter and Paul were driven to practice what they preached.  They could not save themselves.  They needed, daily, to surrender to the intervention of Christ’s grace.

Blessed Peter and Paul, whom we remember today.

“Peter, do you love me more than these?”

The heart-piercing question is asked on the shores of the Sea of Galilee, where Peter and several of Jesus’ other disciples have gone to fish.  What are they doing here?  They have witnessed Jesus’ death and resurrection, he has breathed on them the Holy Spirit and sent them into the world… so what are they doing here in Galilee, taking up again the familiar occupation of fishing?

It’s difficult to predict how we humans will act, especially in the aftermath of extreme trauma and stress.  There can be no doubt that these disciples were shaken by what they had seen in Jesus’ final days and that they were struggling to make meaning of it.  And we can imagine how unsettling it was to encounter their Lord risen from the dead, appearing suddenly in a locked room and showing them the wounds in his hands and side.  It’s not hard to see how all this could have been overwhelming, and how they might have been experiencing fear and confusion as well as hope and gladness. END_OF_DOCUMENT_TOKEN_TO_BE_REPLACED

This conversation between Jesus and Peter took place after Jesus’ resurrection, when Jesus has gone back to Galilee to find Peter.  Peter was hiding.  The three questions Jesus asks Peter must have been, agonizing for Peter, who at Jesus’ crucifixion had denied he as much as even knew Jesus.  Denied three times.

Jesus asks Peter, “Do you love me?”  The Greek verb Jesus uses for “love” is agapan, which is a self-sacrificial love, a laying-down-your-life kind of love, it’s the love of the ultimate self-giving of one’s life, the very thing we understand Jesus offered in his death on the cross.  That’s Jesus’ question of Peter: “Do you love me in such a way that you would offer up your life for me, just as I have for you?”  Peter responds to Jesus, “I love you.”  But Peter uses a different Greek verb for love.  He uses philein, the kind of love we have for our close friends or mates.  A better English translation of the word Peter uses in response is “fond.”  Jesus asks Peter, “Do you love me, the ultimate kind of love for me as I have shown for you?”  Peter responds, “I am fond of you.” END_OF_DOCUMENT_TOKEN_TO_BE_REPLACED

Today is a day which we have been hoping for, and praying for, for a very long time.  A day of rejoicing.  Our dear brother Jim is to make the vows of poverty, celibacy and obedience, as a professed brother of our community.  And what a wonderful day, the Feast of St. Peter and St. Paul, for the profession.

When these two great apostles first met Jesus: Simon the fisherman by the Sea of Galilee, and Saul of Tarsus on the road to Damascus, neither of them could have imagined how Jesus would change their lives.  When they said yes to Jesus’ invitation, “Come follow me,” their lives would never be the same again.

Jim, when you first said ‘yes’ to Jesus’ invitation to “Come follow me” as a twelve year old at Abingdon Baptist Church, Virginia, could you ever have imagined the adventures that lay ahead, and that eventually would lead you to this day – this day, when you will become a full member of this community, and our brother? END_OF_DOCUMENT_TOKEN_TO_BE_REPLACED

Beneath this Gospel text we’ve just read is a subtext.  This interchange between Jesus and Peter is happening, of course, following Jesus’ crucifixion, where Peter had denied that he as much as even knew Jesus.  The subtext is that Jesus has gone back to Galilee to find Peter.  The northern shores of Galilee are a long ways from Jerusalem, but Jesus obviously knew where he would find Peter, and what he would find in Peter.  Jesus asks Peter three times if Peter loves him.  This could only be agonizing for Peter, having denied at Jesus’ crucifixion as much as even knowing Jesus.  Denied three times.  The subtext behind Jesus’ three questions of Peter – “Do you love me” – is that Jesus has already forgiven Peter.  And Jesus already has plans for Peter: Peter will be the key person on whom Jesus will entrust the oversight and leadership of his followers.  Jesus already knows this. END_OF_DOCUMENT_TOKEN_TO_BE_REPLACED

A friend of mine once proclaimed quite forcefully and with real passion that he believed in churches. What an odd thing to believe in I thought when I heard him. I believe in lots of things, but I wasn’t sure that I was prepared to say that I believe in churches. I certainly believe in God, and in the incarnation and resurrection of Jesus. I believe that Jesus is the Son of God and that he continues to manifest his presence among us today in the sacrament of the Eucharist and in the gift of the Holy Spirit. I certainly believe in THE Church, that “wonderful and sacred mystery”1 which is “the blessed company of all faithful people”2 as various Prayer Books have described her. But do I believe in churches? That’s a different matter.

When I first heard my friend talk about believing in churches, I wasn’t prepared to go there. Churches after all, were just buildings and having served in a couple of parishes that had some quite wonderful buildings, I know how easy it is to slip from the worship of God, to the worship of buildings. And yet….

For over a decade now, we in the community have been dreaming, and thinking, and praying, and talking about these buildings. It all began one August during community chapter and discussions when we talked about how there must be an easier way to get in and out of the monastery. From there the conversation developed into wouldn’t it be nice if we had…? And what about…? We even talked about the unspeakable: have these buildings outlived their usefulness? Would we be better off selling and moving somewhere else?