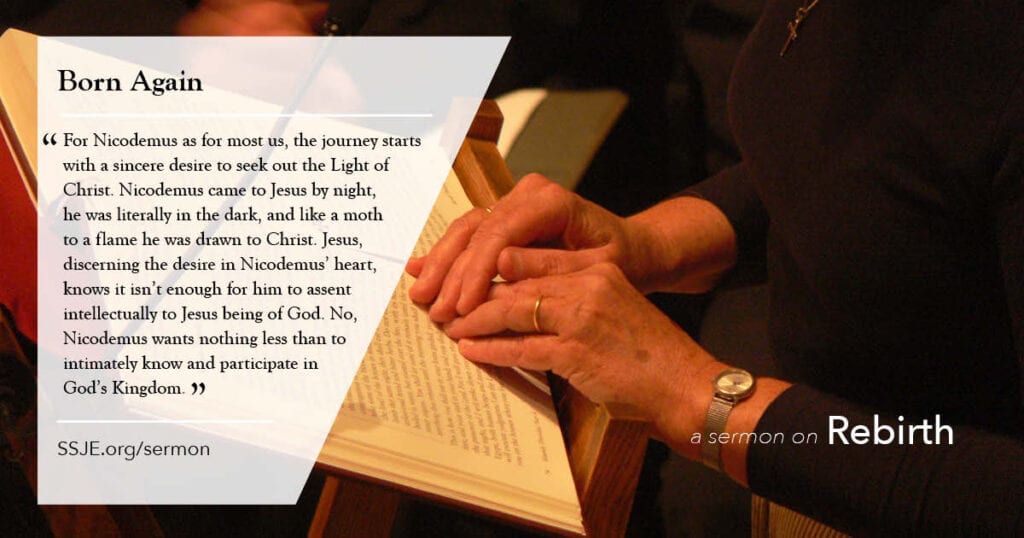 I have a special fondness for the story of Nicodemus, and not just because we share the same name. In 2010, after a few decades of suffering apparent separation between God and me, something happened. It was a very sudden something and it brought spiritual transformation, healing, and gratitude. At the time, the words which came spontaneously to mind describing the experience, the words that felt most true, where that it felt like being born again.

Not long after I found a church and when I told the rector about the “born again” experience she very gently suggested that I call it something else, perhaps a kind of spiritual awakening. I assumed she offered that advice because of the political reality associated with the phrase “born again.” Still, I’ve never forgotten that first Easter I celebrated, how there was an overwhelming and joyful recognition of the baptismal dying and rising of my self in Christ.

Back in the fourth century the sacrament of baptism was seen as the culmination of a Lenten journey, a journey of instruction, spiritual exercises, and ascetic disciplines. Those on this journey, the catechumens, were baptized on the Easter Vigil, a celebration of their participation in the death and resurrection of Christ. As a symbol of this dying and rising, they would enter a pool of water on one side, as entering into a tomb or womb, before emerging on the other side. END_OF_DOCUMENT_TOKEN_TO_BE_REPLACED

And, then the very next verse: “For God so loved the world that he gave his only begotten Son, so that everyone who believes in him may not perish but may have eternal life.” [John 3:16] Martin Luther called this verse the gospel in miniature. It’s all about eternal life.  The whole point of the birth, life, ministry, death and resurrection of Jesus Christ is eternal life: as Christ was raised from death in his resurrection, so shall we be resurrected to eternal life.

In the most literal sense, resurrection simply means standing up again. The word has a broad range of resonance: it’s the word we use referring to Jesus’s being raised from the dead and also God’s raising us to new life after our death.  We also use the word more broadly to refer to all the dyings and risings of this life, all the fallings down and standings up again. END_OF_DOCUMENT_TOKEN_TO_BE_REPLACED

Posted in Sermon and tagged John 3:1-15
Leave a comment
Scroll To Top