Jesus paints the picture of two people: a judge, a man with authority with no respect for others who won’t be ashamed, and a widow, weak and vulnerable. The widow comes persistently asking for justice such that the judge relents, so as to stop being bothered.

Have you agreed to something like the judge? Given in just to stop someone from bothering you. Have you received something for acting like the widow? Persistently present, continually asking. Have you ever felt that God is like the unjust judge? Distant, unhearing, refusing, without respect or shame. Has prayer felt like repetitive knocking or finger pointing? END_OF_DOCUMENT_TOKEN_TO_BE_REPLACED 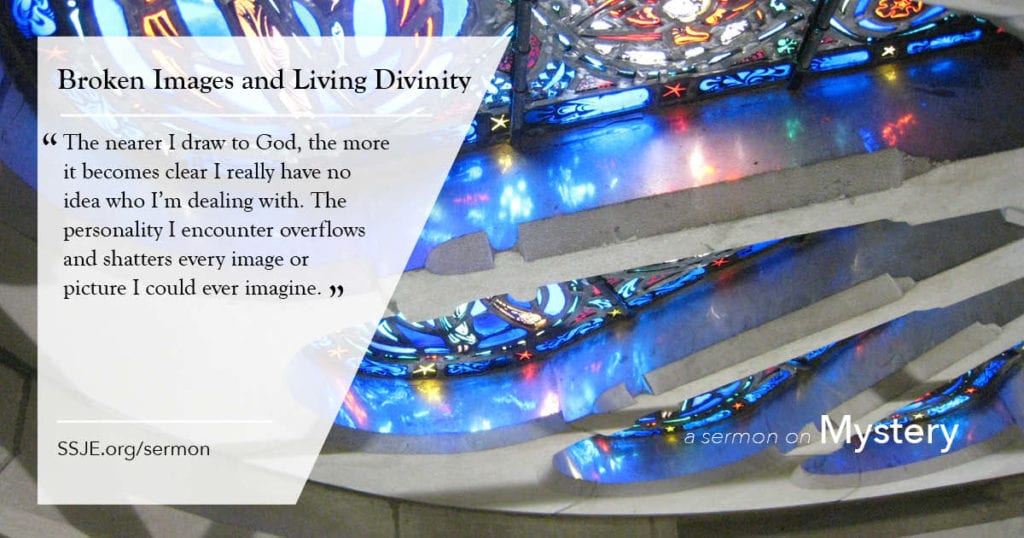 All things have been handed over to me by my Father; and no one knows who the Son is except the Father, or who the Father is except the Son and anyone to whom the Son chooses to reveal him.’[1]

Scripture reminds us that now, as ever, we human beings continually struggle to know and to bear God to the world in the midst of whatever circumstances we may find ourselves. This was clearly the case for Job before his divine inquisition, but I suspect it is true for almost every human being we meet in scripture, from Abraham to Mary and beyond. It is certainly true for me, and I’ll venture a guess that from time to time it might be for you, too.

There is a litany of possible reasons for this trans-human struggle to know and relate to the profundity of the divine nature, but of significance (at least for me) have been the kinds of images and pictures we use for God. Intellectually I understand that these images are all utterly contingent, incomplete, mere shadows of the reality to which I ought to fix my gaze. Yet deep in the hiddenness of my heart I very easily become attached to these images and pictures—many of which often turn out (upon closer inspection) to be reflections of my own private desires and ambitions. Images of a god who will protect me from disaster, from pain, from disappointment, from failure. A god who conforms to my designs. END_OF_DOCUMENT_TOKEN_TO_BE_REPLACED 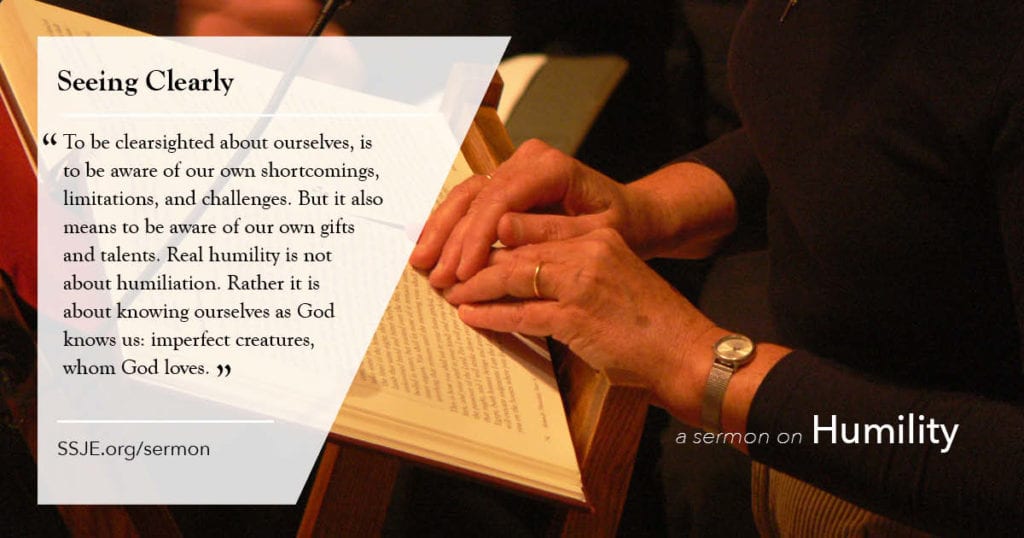 There’s a lot going on in this sixth chapter of Luke’s gospel. It begins with two different teachings about the sabbath. It includes the calling, and naming of the twelve apostles. We hear Luke’s version of the Beatitudes, here given as a Sermon on the Plain, rather than Matthew’s more popular Sermon on the Mount. And then it ends with a collection of teachings, or sayings, perhaps gathered from a variety of occasions, and put together by Luke, as a sort of catalogue of teachings.

What we have this morning are three of those teachings lumped together. One about the blind leading the blind; another about a disciple and their teacher; and the third about the speck and the log.

I wonder though, if these are not so much a collection of random teachings, as an invitation by Luke to some serious self-reflection. END_OF_DOCUMENT_TOKEN_TO_BE_REPLACED 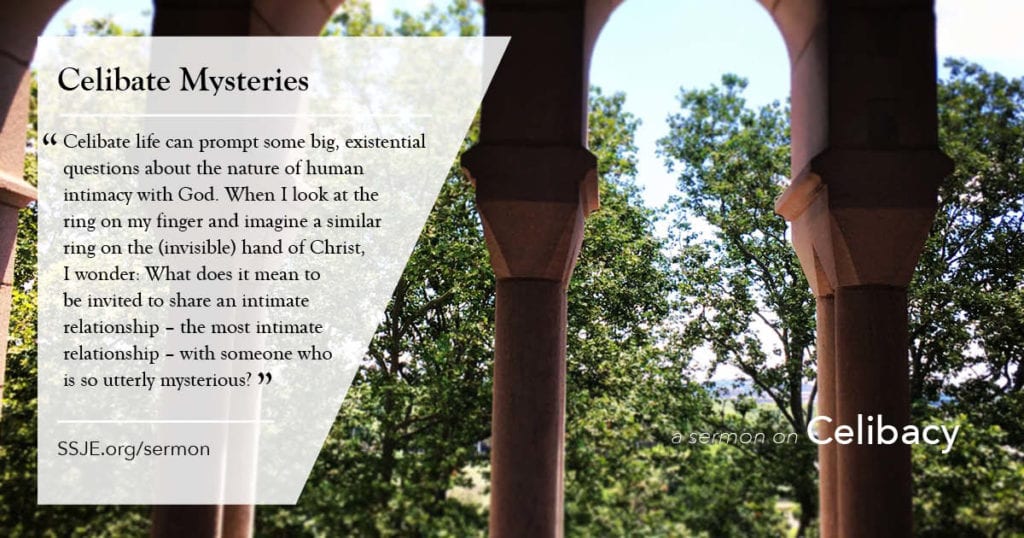 Celibate life can prompt some big, existential questions about the nature of human intimacy with God. When I look at the ring on my finger and imagine a similar ring on the (invisible) hand of Christ, I wonder: What does it mean to be invited to share an intimate relationship – the most intimate relationship — with someone who is so utterly mysterious? 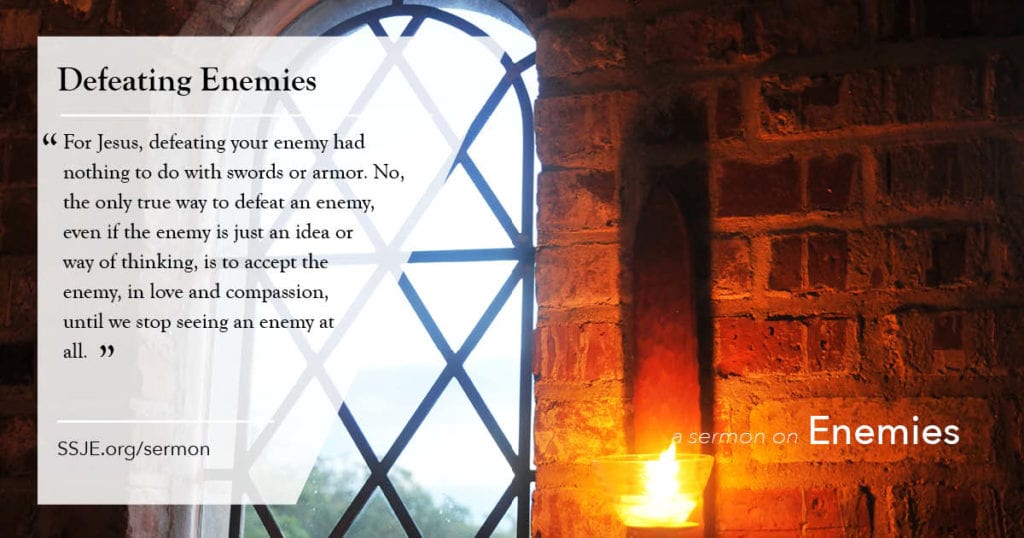 In the story of David versus the Philistine giant, Goliath, we’re made sure to understand that David did not defeat his enemy with the normal implements of war. We’re told, for example, that David tried on Saul’s armor and sword, but it just wasn’t working for him. As Goliath approaches, David announces that the Lord does not save by sword and spear, and at the end of the battle we’re reminded again that there was no sword in David’s hand. No, unlike Goliath, armed to the teeth with sword, spear, and javelin, David had picked up five stones from a nearby stream to use with his humble sling.

Besides David’s notable lack of appropriate weaponry, what also caught my attention was the number of stones. It seems oddly specific to say David chose five stones. With a little research I found, as you could imagine, all sorts of theories on what the five stones represent. One of my favorites is that the number five symbolizes the Torah, the first five books of the Hebrew Bible, and in a more general sense the entire set of teachings and law considered the foundation of Jewish identity and culture.

This led me to consider the foundation Jesus gave us, his summation of Jewish law: love God with your whole being, and love your neighbor as yourself. And, in light of today’s story about David and Goliath, we’ll add: love your enemy. END_OF_DOCUMENT_TOKEN_TO_BE_REPLACED 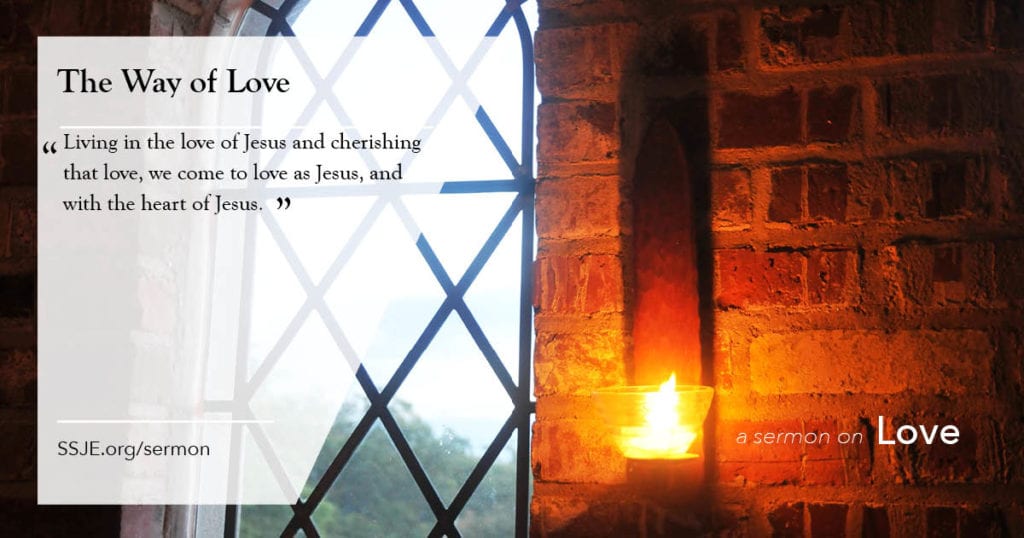 I am not sure when the Feast of the Sacred Heart entered the liturgical life of our community, but it is an image found in Father Benson from the earliest days. Speaking to the All Saints Sisters of the Poor in 1869, three years after the birth of our community, he says:

Love was the guiding principle of [Jesus’] life, and entered into every relationship of his earthly life. Think of the love of Jesus for those who came to him in penitence. Think of the loving grief of that Sacred Heart for all the sin and sorrow and misery that lay around him, – that poor, sin-laden, suffering humanity, which love brought him down to earth to save. And then the love reaching even beyond the grave for the souls gone into the very region of the kingdom of Satan.[1]

On another occasion he tells his listeners,

The love of Jesus is a light within our hearts, quickening the faculties of all our life. However near God might call [us] to himself, it would avail nothing for [our] redemption, it would but show [us our] own sinfulness, and reveal more clearly the meaning of [our] own nature. We must have more than nearness to God, we must have union with [God] – and this can only be in Jesus.[2] END_OF_DOCUMENT_TOKEN_TO_BE_REPLACED 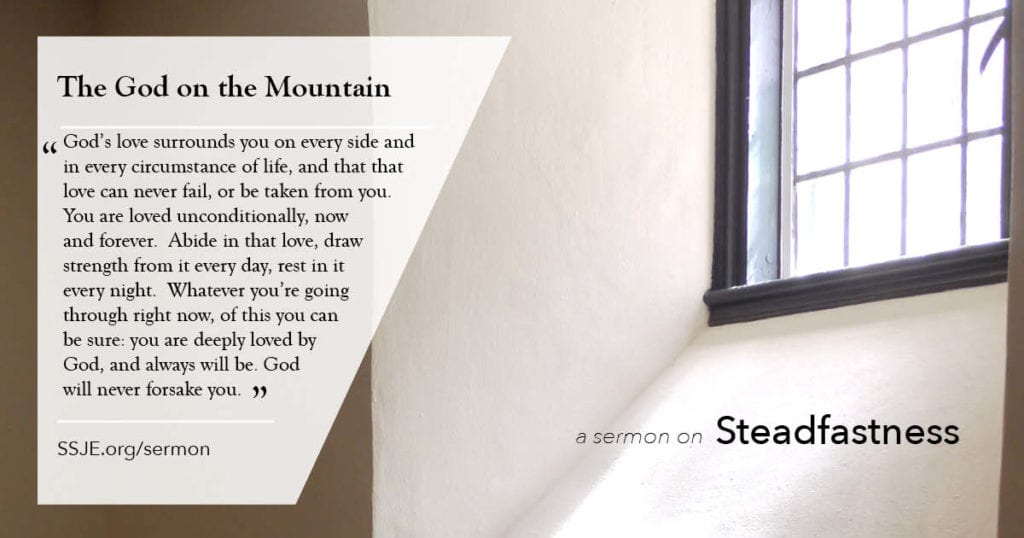 I’ve been listening to a lot of gospel music lately.  I do it because gospel music makes me happy, and offers glimpses of hope in a world that at times seems overshadowed by darkness.  One of the songs I’ve come to find solace in goes like this:

Life is easy when you’re up on the mountain;
you’ve got peace of mind like you’ve never known.
But things change when you’re down in the valley;
don’t lose faith, for you’re never alone.

The song acknowledges that life has its ups and downs, its mountains and valleys, and that it’s easy to talk of faith “when life’s at its best.” But when we’re “down in the valley of trials and temptations, that’s where [our] faith is really put to the test” (quotations from the 2nd stanza).  Doubtless we know this to be true from our own experience.

St Paul knew it.  He had been on the mountaintops with God, borne into the heavens by the Spirit; but he also knew what it was to descend into the valley, to encounter resistance, persecution and evil.  It’s moving to see him, a great giant of the faith, beseeching the Thessalonian Christians to pray for him.  It is a mark of his humility, I think, and a valuable sign for us.  We need one another.  We need one another’s prayers.  Paul is well aware of his own weakness and of the enormous challenges that are part of his calling, and he is humble enough to implore his fellow Christians to pray for him. END_OF_DOCUMENT_TOKEN_TO_BE_REPLACED 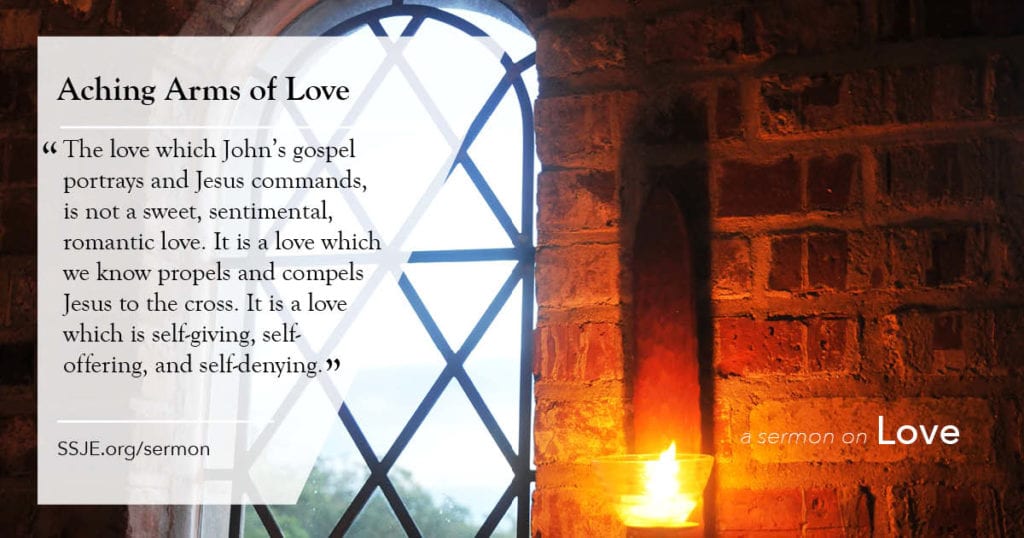 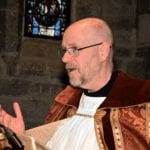 To describe the gospel of John as the gospel of love would not be inappropriate. From the very opening chapters of the gospel, where we read that God so loved the world that he gave his only Son, so that everyone who believes in him may not perish but have eternal life. Indeed God did not send the Son into the world to condemn the world but in order that the world might be saved through him[1] we hear that God’s motive, from the very beginning, was a motive of love.

That motive of love runs throughout the gospel, and reaches its climax in what we hear and see in tonight’s lesson, which comes to us from that very tender scene in the Upper Room, on that first Maundy Thursday. I give you a new commandment [Jesus says to his disciples], that you love one another. Just as I have loved you, you also should love one another. By this everyone will know that you are my disciples, if you have love for one another.’[2]

We remind ourselves of this in our Rule of Life when we say that [faith] sees the cross of suffering and self-giving love planted in the very being of the God revealed to us in Jesus. When God made room for the existence of space and time and shaped a world filled with glory, this act of creation was one of pure self-emptying. But God broke all the limits of generosity in the incarnation of the Son for our sake, “who, though he was in the form of God, did not regard equality with God as something to be exploited, but emptied himself, taking the form of a slave, being born in human likeness. And being found in human form, he humbled himself and became obedient to the point of death – even death on a cross.”[3] END_OF_DOCUMENT_TOKEN_TO_BE_REPLACED

It probably goes without saying that when Jesus says “don’t worry,” he’s focusing on the subjectively negative experience of anxiety and the feeling of distraction that comes with it, as opposed to just acknowledging a concern for something, and taking appropriate action. The Greek word Luke uses has these negative connotations of anxiety and distraction, and he uses this same word when Jesus tells Martha she’s anxious. END_OF_DOCUMENT_TOKEN_TO_BE_REPLACED 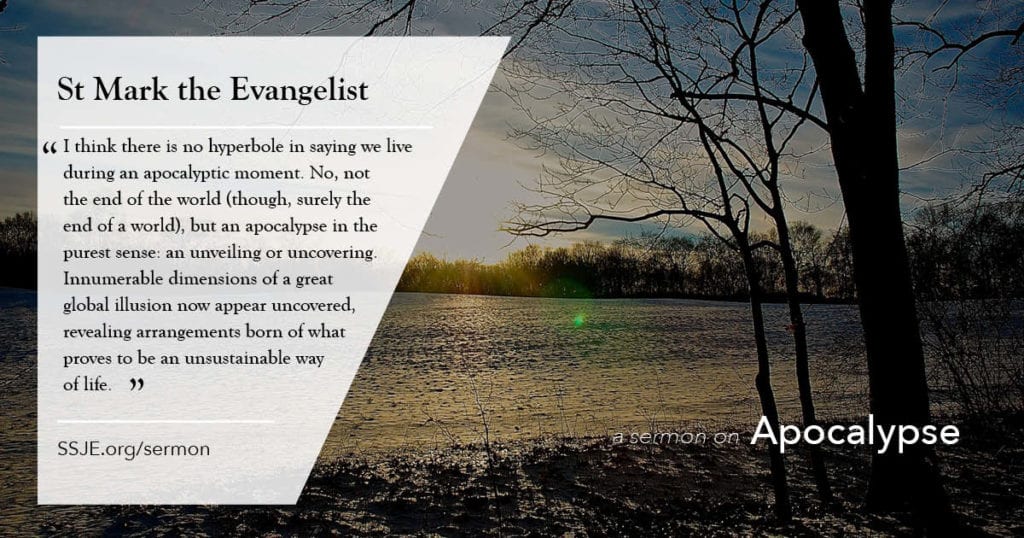 Dear Brothers, as this season in the world continues to unfold, I think there is no hyperbole in saying we live during an apocalyptic moment. No, not the end of the world (though, surely the end of a world), but an apocalypse in the purest sense: an unveiling or uncovering. Apo, to take away; kalypto, veil; apokalyptein, to remove the veil. Innumerable dimensions of a great global illusion now appear uncovered, revealing arrangements born of what proves to be an unsustainable way of life. For some, this period of epidemic is seen as a mere annoyance, an interruption; the sooner we return to the way things were, the sooner we can get on with our own projects, plans, and dreams of infinite growth and material security. For others, however, the apocalypsis of this season reveals the inevitable result of a way of life inherently at odds with the limits of nature and the poverty of our humanity. Now, with the kalypto plainly removed, we find ourselves confronted with urgent realities, larger than coronavirus, larger than individual or national dreams; realities as sharp as life and death. Realities that ask us to change our minds—that is, repent.

Today we remember St Mark the Evangelist, whom tradition remembers as John Mark, a disciple of St Peter. Mark, whoever he was, writes to a community in the very midst of apocalypse. His is the first gospel we have in any written form, and we find it permeated with the literary cues of apocalyptic language. The narrative is urgent and fast-paced as Mark seeks to uncover something for his hearers. Indeed, one of the most frequent words in this gospel is immediately. It not only moves quickly, but also seems mysteriously to imitate the confusing velocity with which the reign of God began its invasion of the world through that most unique and mysterious uncovering: Christ crucified. END_OF_DOCUMENT_TOKEN_TO_BE_REPLACED