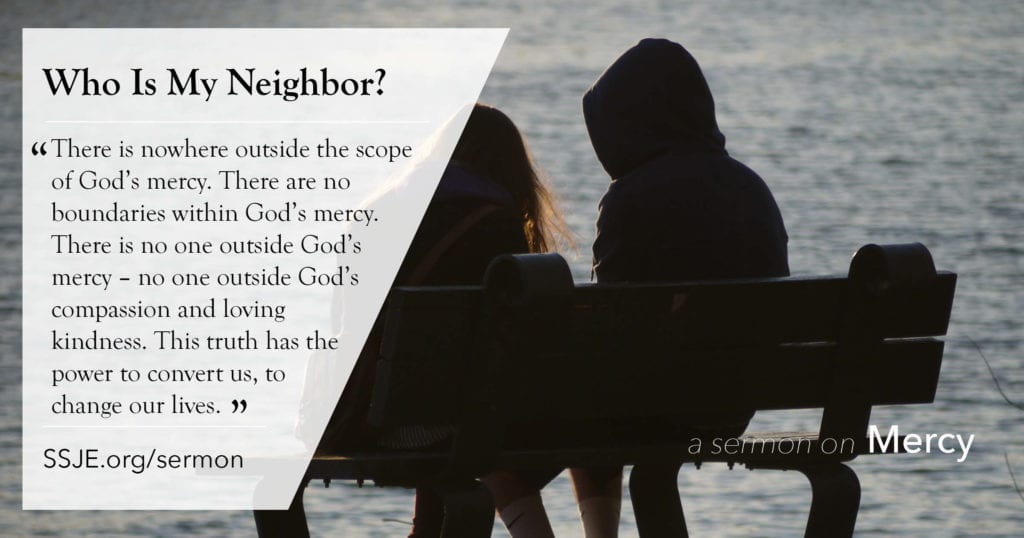 When I was 26, I went to the Holy Land for the first time. The day I remember most was getting up at 3:00 o’clock in the morning with my fellow pilgrims and leaving our hotel in Jerusalem and getting into our coach, and in the dead of night driving due East. Ahead of us lay the great Judean wilderness. We could see very little, but eventually the coach stopped and we climbed out into the utter silence of the desert. As we stood in awe, our eyes slowly made out the shape of the hills, below the twinkling stars. Then the bus drove off. We were alone – standing together on the ancient road from Jerusalem to Jericho.

We, like the man in the parable, were going to walk from Jerusalem to Jericho. The ancient road is not the modern highway which now carries countless pilgrims down to Jericho in their air conditioned coaches. The road which we were taking winds its way between the hills and the rocks and the canyons, but always going down and down. For Jerusalem is high in the hills, while Jericho is way below sea level, one of  the lowest points in the earth’s surface. The cities are less than 20 miles apart.

And so we set out for several hours of silent, prayerful walking .We began to see more and more clearly, and then there was a glorious sunrise, and we all sat down on the rocks and had Eucharist together.

On we walked, as the temperature rose; it became incredibly hot. “Keep drinking, keep drinking!” said our Palestinian guide. We did. But, sadly, we never made it to Jericho. The heat and sun became so intense as we walked lower and lower that some of our party felt unwell, and we called for the bus to drive us the last few miles into Jericho.

There are two lessons to be gleaned from this story Jesus tells about the robbed man, the priest and Levite who pass him by, and the Samaritan who is kind and caring, the hero of Jesus’ story.  The first lesson is a theme to which Jesus returns again and again in so much of his teaching: his preferential option for the other, for the stranger, for least and the last and the lost person.  END_OF_DOCUMENT_TOKEN_TO_BE_REPLACED

A version of this sermon was preached July 17, 2011; twenty four Jewish, Muslim and Christian children from the Kids4Peace program (www.kids4peaceboston.org)  were present. Visit www.SSJE.org/galleries to see pictures from the morning.

I’ll bet some of you, when your parents see you, some of them will say, “Oh, Samih/Ma’or/Nicholas–you look bigger!”  Maybe they’ll be teasing you a little bit.  Maybe you’ll be only this much taller. But in another way, you will all be bigger.  Even if we can’t see it when we look at you. Maybe after these two weeks of Kids4Peace you’ll look exactly the same as you did before, but you are somehow bigger.  That’s what I’d like to talk about: getting bigger.

The story we just heard is sometimes called “The Good Samaritan”.  But I think we could also call it “The Big Samaritan”.  Now the story doesn’t tell us if the Samaritan man is tall or wide. But it does tell how he took care of the man who was robbed and beaten.  Why could we call it “The Big Samaritan”?  What is big about this man?  He has a big heart. Lev Gadol.  Qalb kbiir.  Or we might say he has a big soul. Nefesh gadol.  Nafs kbiir.  He has a big heart because he has compassion for someone who is suffering. END_OF_DOCUMENT_TOKEN_TO_BE_REPLACED

You may know the term “proof-texting” when it comes to the interpretation of the Bible.  Proof-texting comes down to deciding whatever it is you want to say about the Bible, and then searching out the scriptures to find the verses or the stories to support or prove your point.  By being very selective in your Bible references, by choosing and mixing and matching verses, you can make the Bible say almost anything you want it to say.

For example, “Judas went out and hung himself.”  “Go and do likewise.”  That could be a rather extreme example of proof-texting: patching together two things which really are not related to one another.  Another form of proof-texting is taking a verse or story from the scriptures out of the larger context – making more of it or less of it than should be, were you to look the whole picture.

I want to say that this gospel lesson appointed for today could lend itself to proof-texting.  If we were to take Jesus’ story of this good Samaritan as a kind of normative template for how we are always to navigate in the world, we might miss the mark.  Now I know this is rather risky ground for a preacher to tread.  The Good Samaritan gets such good press in the Bible.  Who am I to impugn the actions or motives of the Good Samaritan?  So I won’t.  Rather, I want to extol the virtues of the priest who gets very bad press.  This is the priest who passes by to the other side of this man who has been beaten and robbed.  I admit to identifying with the priest.  I have passed by many people, many, many people in life who are in great need.  They may not be bloodied by robbers, as in Jesus’ story, but they are clearly wounded by life.  Something has happened to them, and you need go no further than the streets surrounding Harvard Square to find such poor souls.  Whether they have struggled with substance abuse, or mental illness, or joblessness, or some kind of terrible trauma, whatever, they are clearly in need, a good many of them standing or sitting or laying beside the roadway.

END_OF_DOCUMENT_TOKEN_TO_BE_REPLACED

Posted in From the Archive, Sermon, SSJE and tagged Luke 10:25-37
14 Comments
Scroll To Top
Loading Comments...