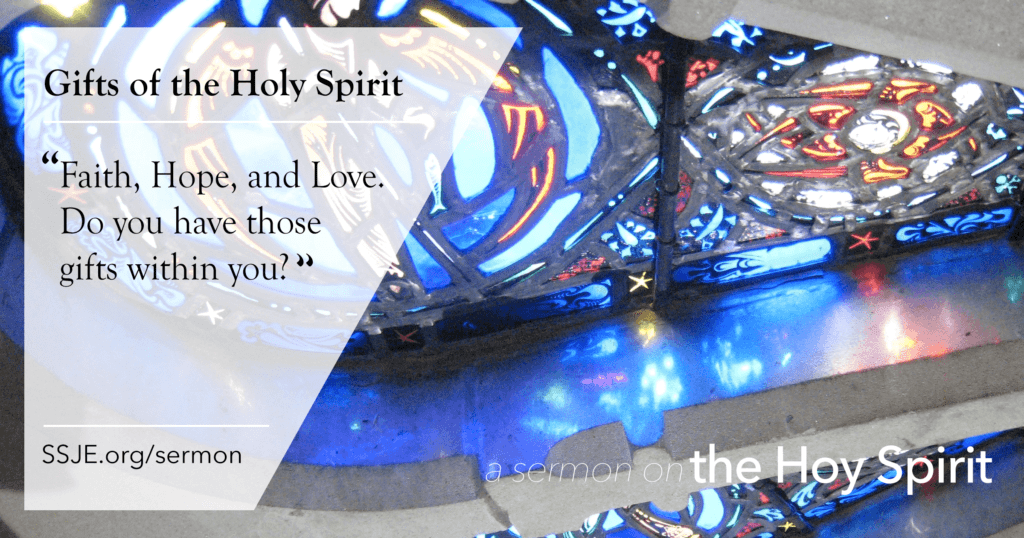 At the end of today’s Gospel reading we find Jesus pointing to the role of the Holy Spirit. In an age of persecution these words were a significant reminder of how important reliance on the Holy Spirit is. In an age like our own when many are mired down in ambiguity these same words can be a reminder to those who are uncertain about matters of faith that they can rely on the Holy Spirit to guide them to truth and certainty.  END_OF_DOCUMENT_TOKEN_TO_BE_REPLACED

“And I tell you, everyone who acknowledges me before others, the Son of Man also will acknowledge before the angels of God; but whoever denies me before others will be denied before the angels of God.  And everyone who speaks a word against the Son of Man will be forgiven; but whoever blasphemes against the Holy Spirit will not be forgiven.”

Hard words, very hard words; and words that seem to me rather uncharacteristic of the Jesus portrayed for us in the Gospel of Jesus Christ according to Luke. END_OF_DOCUMENT_TOKEN_TO_BE_REPLACED

When we read, or hear, the beginning words of today’s reading from the first letter of John, “Children, it is the last hour!” (1 Jn 2:18) it may seem to us to be hysterical exaggeration, or a form of romantic hyperbole.  On the other hand it could be seen as a summing up of the situation of our world in these days.  Someone might ask, “is it the last hour?”  I think that most of us do not want to think of the events in the past year or two as signs of the end; earthquakes in Haiti, New Zealand, and Japan; the tsunami and nuclear accident in Japan, typhoons and flooding in the Philippines, wild brush fires in California and Australia, the political upheaval in the Eastern Mediterranean, and the tensions in our own country in these early days of an election year.  There have been a number of these “signs”, but most of us don’t want to think of those things as signs of “the last times,” (I’m sure though that there are some people who do think that those things are apocalyptic signs.)  The world has been through many similar periods of natural disaster and political, spiritual, and economic tension from almost the earliest times. END_OF_DOCUMENT_TOKEN_TO_BE_REPLACED