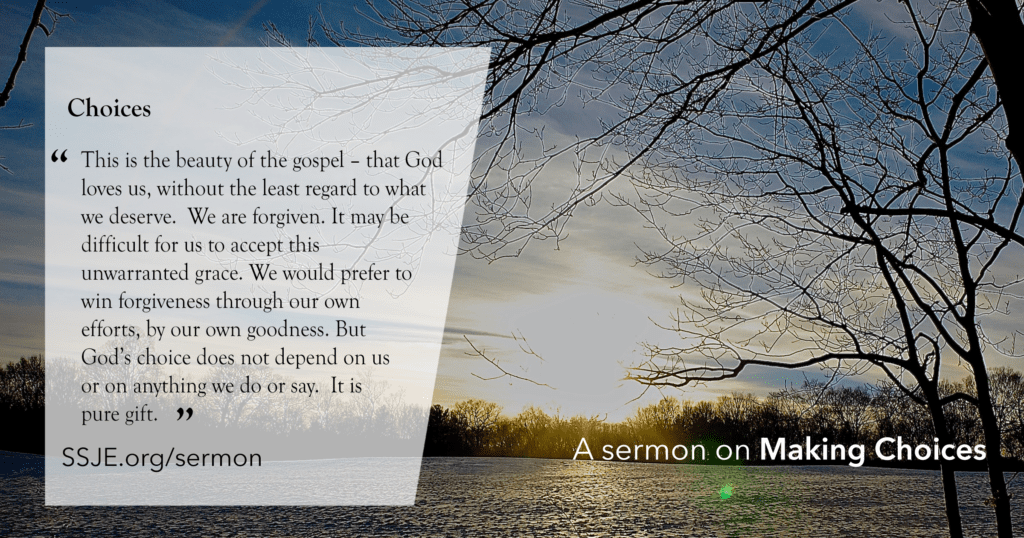 There was once a man whose younger son wanted to make his own choices in life. Now it pained the father to let him make these choices because he suspected that his son was not really mature enough to make wise choices – but still he gave him the freedom he wanted.  (There are times when this is a good thing for love to do.)

At any rate, his son was pleased, and he began to make his choices.

He chose, first of all, to have his share of his father’s inheritance turned into spending money. Then he chose to leave his father’s home, taking all his money with him. Next, he began to choose some new friends, and together with them he chose some ways to spend his money. And with each choice that he made, that deep inner part of him, the part of him that made choices, was becoming something a little different than it was before.

Until at last he found that his choices had ruined him.

That was the turning point. END_OF_DOCUMENT_TOKEN_TO_BE_REPLACED

Wasteful, extravagant, profligate, spendthrift.  These are all words that are synonymous with the first definition in the dictionary of the word prodigal.  I have to admit that it was only recently that I learned that word’s true meaning.  I grew up in the Baptist church and all my life have been steeped in scripture.  I estimate that I’ve heard this parable from Luke’s gospel thousands of times in my lifetime.  But I never knew the true meaning of the word prodigal.  I had always just assumed it either meant ‘lost,’ as in the parable of the lost son.  Or perhaps ‘repentant,’ as in the parable of the repentant son.  These certainly could fit.  But after finally looking up the word, it all makes sense.  Prodigal:  spending money or resources freely and recklessly; wastefully extravagant.

There is not anything particularly unusual about the younger son’s request for his inheritance.  In William Barclay’s commentary on Luke’s gospel, he says that when a patriarch was of a certain age, he could go ahead and settle his affairs early.  By law the eldest son would get two-thirds of his father’s estate and the youngest would get one-third.[i]Jesus places no judgments on the younger son but simply implies that the he wanted to go live his life and asked for his share of inheritance and left.  It seems perfectly normal for a young person to desire this.  In my own life, I remember I couldn’t wait to leave the hills of southwestern Virginia and experience what life had in store for me in a bigger, exciting city. END_OF_DOCUMENT_TOKEN_TO_BE_REPLACED

The English word, prodigal, comes from the Latin, prōdigus, wasteful.  Here we have this story Jesus tells about the “prodigal son” who wastes his life away until he comes to his senses.  I would say this is more than a story about a son; this is like a five-part mini drama. END_OF_DOCUMENT_TOKEN_TO_BE_REPLACED