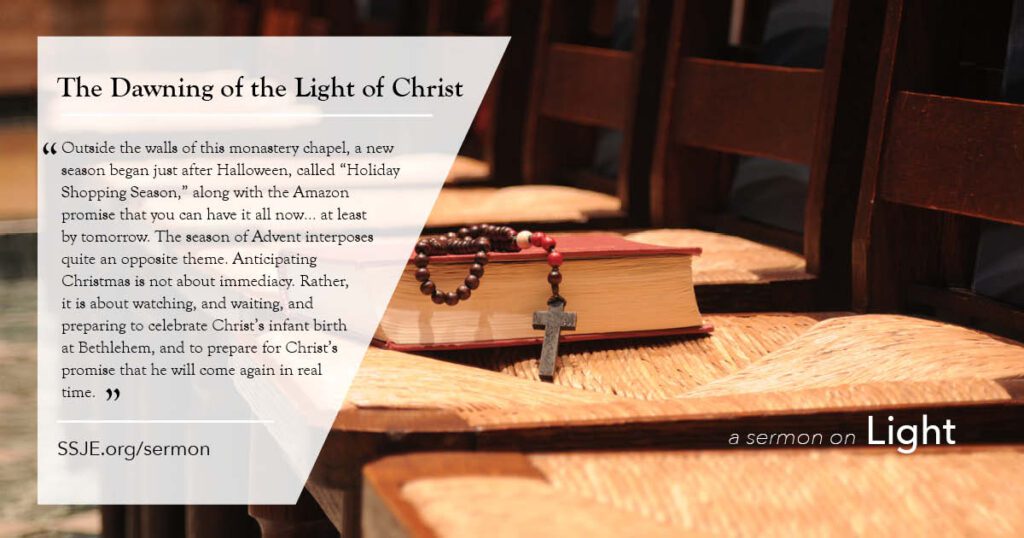 It is curious that we begin a new season today, the First Sunday of the Advent season. Outside the walls of this monastery chapel, a new season began just after Halloween, called “Holiday Shopping Season,” along with the Amazon promise that you can have it all now… at least by tomorrow. The season of Advent interposes quite an opposite theme. Anticipating Christmas is not about immediacy. Rather, it is about watching, and waiting, and preparing to celebrate Christ’s infant birth at Bethlehem, and to prepare for Christ’s promise that he will come again in real time. In Advent, you will see no holiday glitter here in this chapel. What catches our eye’s attention is the Advent wreath, front and center, on which we slowly light candles. In the Hebrew scriptures, the promised Messiah teems with the language of light. The Messiah is called “the Dayspring,” “the Morning Star,” “the Sun of Righteousness,” “the Light of the World.”

And don’t we need light, especially as we approach the winter solstice?  Meanwhile, there’s more and more darkness outside. The reason why Christmas came to be celebrated on December 25th probably has to do with light. The earliest Christians most likely wanted the date of Christmas to coincide with the festival of the Roman Empire on December 25th which marked  “The Birthday of the Unconquered Sun.”[i] This festival celebrated the winter solstice, when the days again begin to lengthen and the sun rises higher in the sky: December 25th.[ii]  And so light has historically figured very importantly into this Advent season preparing for the coming and coming again of Christ: light. Light in the sky and light in our souls. END_OF_DOCUMENT_TOKEN_TO_BE_REPLACED 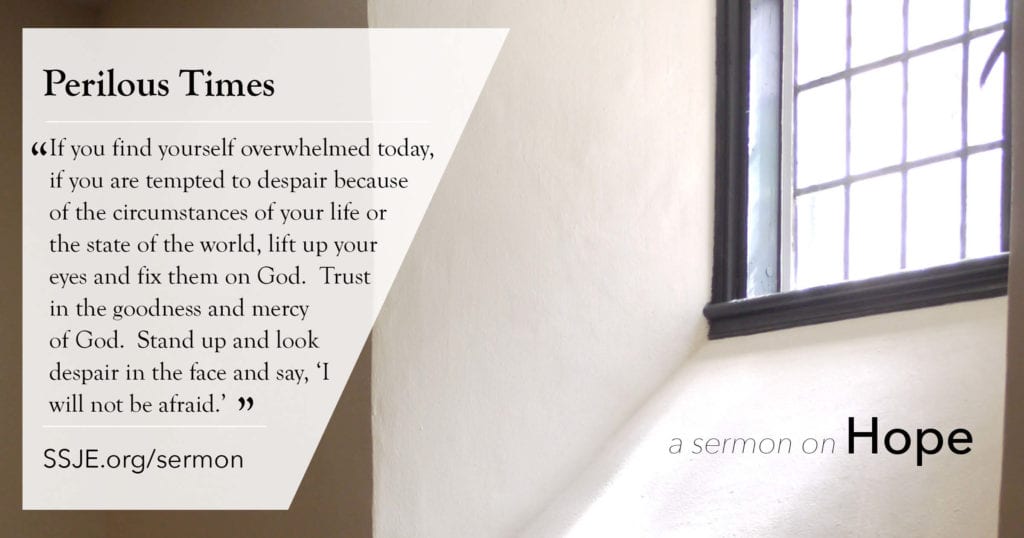 I was listening to public radio yesterday and learned of a new book written primarily for women – but with application for us all, I would imagine. It’s called Overwhelmed.  The title struck me as particularly appropriate for the times in which we are living.  Many of us find ourselves overwhelmed by the pace of life, by the expectations placed on us by our families or our work places, by the culture in which we live or by the demands of technology.  We feel overwhelmed at times by the political tensions that are so evident right now in our country, or by the threats of enemies abroad.  We worry about gun violence, climate change, and economic stability. Life can sometimes feel overwhelming and the temptation to desperation or despair very real.  Perhaps you are even now in such a place, uncertain about your future or our future as a nation and a world.

Where do people of faith find hope in times of trouble?  Where do they turn in times of duress, when their world has been turned upside-down, when their expectations have been shattered, when even their beliefs and assumptions have been called into question?  A look at today’s gospel lesson may help. END_OF_DOCUMENT_TOKEN_TO_BE_REPLACED